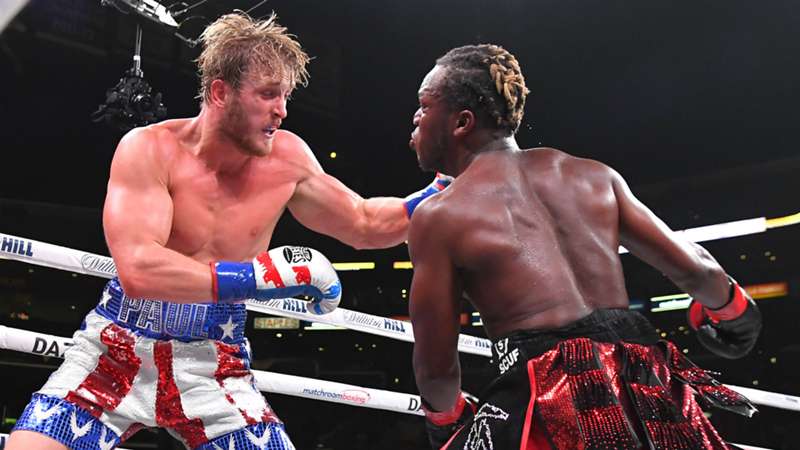 KSI edges his YouTube rival Paul, giving social media all it could handle.

In a rematch for YouTube subscriber supremacy and bragging rights, Logan Paul and KSI gave social media all the smoke it could handle.

But when the final bell tolled and Michael Buffer read the judges' scorecards, KSI was declared the winner by split decision (55-56, 57-54, 56-55). The British fighter raised his hand in sheer elation at the Staples Center in Los Angeles on Saturday night, moments after he broke the internet and brought closure to the rivalry.

Although KSI was the aggressor, repeatedly working to get inside and bash Paul with power shots, the British fighter was the benefactor of a two-point deduction of Paul in the fourth round. The wild sequence that round started when Paul landed a big uppercut, sending KSI crashing down to the canvas. However, the ref ruled that it was a punch behind the head and a push that made KSI taste the mat. It was ruled a knockdown and a two-point penalty for Paul.

If anything, the ruling offered a bit of karma, as KSI dropped Paul with an overhand right in the third round, but the ref incorrectly ruled it a shot behind the head. The instant replay from DAZN showed the punch landed just behind Paul's ear and should have been ruled an official knockdown.

Still, while Paul re-asserted his jab in the fifth round, KSI managed to gather his wobbly legs enough to close out the show as the aggressor in the sixth to power his way to victory.

"I was scared to fight," KSI offered about his feeling last summer after his original bout with Paul ended in a majority draw.

"This time, I just went in," he added about his gutsy performance in what was their pro debut. "I kept going and kept going."

He certainly did. Paul made it clear that he thought the two-point deduction was the cause for him losing the rematch, and might take the decision up with the state commission.

"The two points that I got taken away from me was the reason I lost tonight." 💬#KSILoganPaul2 pic.twitter.com/kBYDFFmAIf

But both YouTuber rivals squashed their beef in a sign of respect afterwards.

When Paul said he'd be up for a trilogy fight, KSI dashed that prospect quickly.

KSI says he's on to the next thing. 🆕 pic.twitter.com/05hkASmr6s

Round 6: Paul hits KSI in the back of the head while in the clinch, and the ref breaks the action, warning Paul. KSI now landing a couple of chopping power shots. All heart at this point. Twenty-five seconds left. KSI with an uppercut. Both fighters slugging it out briefly. KSI with a right hand, pushing Paul back. Gassed, but still swinging to the end, there's the final bell. We're going to the final scorecards again. Let's see how the judges score this one. (10-9 KSI, 56-55 KSI)

Round 5: KSI still wobbly on his legs, as Paul re-asserts the jab, looking like the fresher fighter entering the sixth and final round. (10-9 Paul, 46-46)

12:30 a.m.: This fight is going to give social media all the smoke it craves. All the smoke.

Round 4: KSI trying to rip the body midway through the round. But he seems to be the more fatigued fighter at this point in the bout. Oh! Paul with a big uppercut and KSI is down, stumbling and wobbly on his feet. But it won't be scored as a knockdown, as the ref rules it a punch behind the head and a push that made KSI taste the canvas. Ref now officially rules it as a knockdown and two-point penalty for Paul! (8-8, 37-36 KSI)

Round 3: KSI shoots a look over to his corner, although it's unclear what advice he was looking for. KSI drops Paul with an overhand right! Oh my! Although it looks like clean punch, the ref says it was behind the head, therefore it's not a knockdown. KSI exits the clinch with an overhand right and left seconds later. Paul slips right before the round ends. The replay shows the overhand right landed right behind the ear — not the head — so that should have been a knockdown. Shannon Briggs imploring Paul to go back to the jab instead of trying to fight it out with KSI. (10-9 KSI, 29-28 KSI)

Round 2: Paul jabbing KSI down, but KSI counters with power shots. That's been the story of this round and fight thus far, one-third of the way through. This round goes to Paul, with his jab being more effective than KSI's overhand rights. Still, Paul needs to be cautious of KSI's home run swings. (10-9 Paul, 19-19)

Round 1: Both fighters start out with a jab, showing they've learned the basics of boxing. KSI swings wildly and misses on an overhand right.

Paul doubles up with the jab. KSI digging to get inside. You can see Paul breathing out of his mouth. That's not a promising sign, considering he had fatigue issues in their first fight. KSI lands a strong right. Paul has had his hands down for a majority of this round. Paul scores a left hook moments later. KSI with a slicing right that lands its mark. This fight doesn't feel like it's going to go the distance. KSI is scrapping to get and stay inside, while Paul wants to stay on the outside. (10-9 KSI)

12:05 a.m.: National anthem performances to be followed by fighter introductions and this highly anticipated rematch will be on and popping. Paul and KSI each tout millions of YouTube subscribers, but none of the masses will be able to help them tonight. The only numbers likely to matter is the number of punches they throw ... and more importantly connect on. After their majority draw last summer, gone is the headgear and on is the 10-ounce gloves. Regardless of who wins in their professional debut tonight, this should be nothing less of an entertaining spectacle. Buckle up!

12:02 a.m.: Rick Ross rhyming in the ring, as KSI, donning a mask and looking like he's super focused, makes his ring walk.

12:00 a.m.: Logan Paul with his back to the cameras, before making his ring walk.

11:46 p.m.: And that's that for Ababiy-Batista, which was a bizarre one-round fight. Ababiy knocked down Batista after hitting him in the back of the head. The referee deducted a point from Ababiy, who had dominated the round. But then, when the bell rang to end the round, Batista kept throwing punches. The referee stepped in, and when Batista tried to throw yet another punch, he was disqualified. And with that, the fight ended. Up next: Logan Paul and KSI.

11:39 p.m.: No, that's not Logan Paul entering the ring, but Nikita "White Chocolate" Ababiy, who's facing Jonathan Batista. This is the last fight before Paul and KSI gets underway.

11:33 p.m.: Devin Haney defends his WBC lightweight title with a unanimous decision win over Alfredo Santiago. It wasn't the knockout-performance many expected, but in the post-fight interview Haney said he injured his shoulder.

11:27 p.m.: Before the final round of Haney vs. Santiago, DAZN shows KSI with the gloves on warming up. Paul, meanwhile, is sitting in a chair, gloves not on yet, and looks relaxed.

11:02 p.m.: Haney drops Santiago after an aggressive fifth round. Santiago gets out of the round, but will he last much longer?

10:54 p.m.: Justin Bieber is in Logan Paul's locker room before the fight, in prayer with Team Logan.

10:52 p.m.: If you're wondering who's favored in the fight, betting expert Rob Perez says Paul is the favorite (-334), and KSI is the underdog (+250). Meanwhile, earlier in the night on DAZN's countdown show, Ryan Garcia revealed he bet $10,000 on Logan Paul winning.

Jake Paul talks about a possible fight against AnEsonGib...

And then possibly fighting his brother, Logan. 😳 pic.twitter.com/SR3DkwUNKJ

10:43 p.m.: And we're underway for the Haney vs. Santiago fight, with Haney defending his WBC lightweight belt.

10:33 p.m.: DAZN just showed an interview with rising star Devin Haney, who's getting ready to fight next, telling the story of how he knocked someone out of his shoes — literally — the first time he sparred in the gym. Haney is expected to be one of the big names in boxing and to put on a show tonight.

10:26 p.m.: Jake Paul says he'll be walking out with Logan Paul when he takes the ring, but he's unsure if Justin Bieber, who's at the arena, will walk out with them.

10:21 p.m.: Saunders takes longer than expected to beat Coceres, and he apologizes to the crowd for his performance. Still, Saunders says he's ready to take on the face of boxing, Canelo Alvarez.

10:01 p.m.: We're about an hour away from KSI and Logan Paul taking the ring. In the meantime, the fighters have arrived, as have the celebrities, and Paul has revealed a U.S.-inspired outfit for the night.

Logan Paul arrives at Staples Center and gives us the rundown on how he's feeling 🎙 #KSILoganPaul2 | @LoganPaul pic.twitter.com/0uqhtdL6Oj

Diego Pacheco may be only 18-years-old, but he has POP 💥 #KSILoganPaul2 pic.twitter.com/ZXvW01qWCK