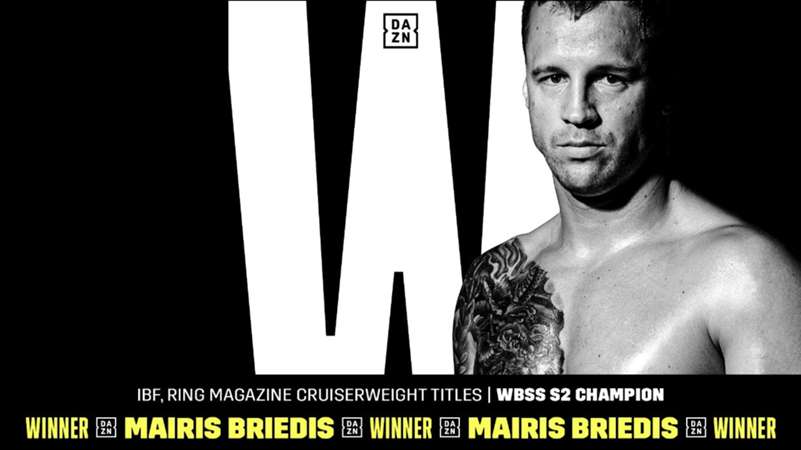 The Latvian veteran dedicated the victory to his home country, as he also celebrated with the Muhammad Ali Trophy.

Mairis Briedis kept banking rounds as the cleaner puncher, while the home run hit that Yuniel Dorticos was measuring up never came.

The end result was Briedis producing a majority decision victory over Dorticos to take the IBF cruiserweight championship and win the second season of the World Boxing Super Series cruiserweight final Saturday night. Judges at the Plazamedia Broadcasting Center in Munich scored it 117-111, 114-114 and 117-111 to give the 35-year-old Latvian boxer the win, with the championship and Muhammad Ali Trophy that came with it.

While the WBSS final was low on fireworks, Briedis was the more consistent boxer, as he connected on the cleaner, more precise punches to seize rounds and subsequently the victory. While Dorticos had the heavier, stronger hands, there were too many instances when the 34-year-old Cuban didn't let them go freely enough. That cost him the title, and at the very least, a chance to make the bout closer, as Briedis relished in the win.

"First of all, it feels like a dream," a victorious Briedis (27-1, 19 KOs) said after the fight, as translated in English. "Thanks to everyone who was watching back in Latvia. I hope I made you proud."

After wrapping the IBF title around his waist, Briedis was asked how it felt to also win the coveted Muhammad Ali Trophy. He paused to say, he'll only know when he touches the hardware, before proceeding to do just that by hoisting it into the air with a huge grin.

What a battle this was! 👏 pic.twitter.com/TWoaR1KaAi

Briedis has now gone 4-0, including three decisions and one TKO, since being edged in a majority decision loss to former cruiserweight ruler Oleksandr Usyk in January 2018.