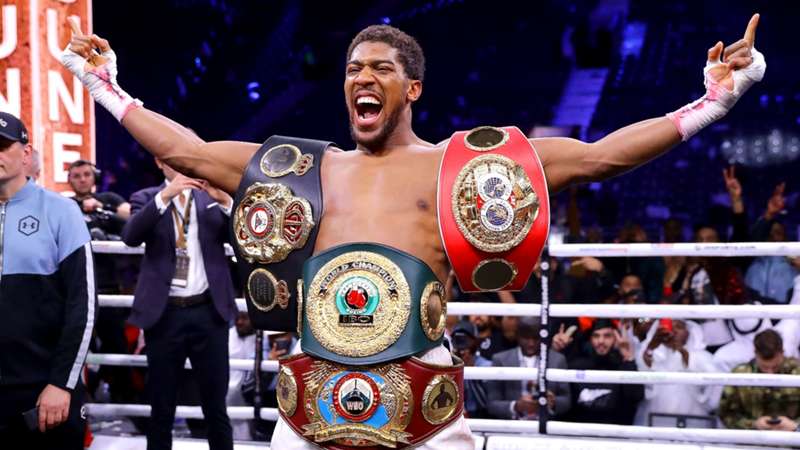 IBF, WBA, WBO, WBC, unified, undisputed, lineal — we're here to help you sort through what all the world boxing titles and terms mean.

Boxing fans are hoping for a showdown in 2021 between Fury and unified heavyweight titleholder Anthony Joshua, who has the IBF, WBA (Super) and WBO belts in his grasp. If that fight were to happen, it would crown an undisputed champion in the heavyweight ranks.

Putting all of those titles and terms together certainly can be a mouthful. What do they all mean, and what is the purpose of them all? The guide below explains all the boxing hardware and phrases associated with them.

The lineal champion is defined as "the man who beat the man." Its history can be drawn back to the late 1800s with John L. Sullivan in the heavyweight division at a time when there was considered one true champ. The person who beat that champion then became "The Man."

In Fury's case, he beat lineal champ, Wladimir Klitschko, in November 2015 to capture the IBF, WBA (Super) and WBO belts. Fury relinquished the titles due to a litany of personal issues. But he never lost them in the ring, which is why he still considers himself the lineal champion.

A unified champion is one who holds two or more of the major sanctioning titles (IBF, WBA, WBC and WBO). Fury was a unified champion, and Joshua is a two-time unified three-title holder.

The International Boxing Federation was officially formed in April 1977. At first, it was treated as a regional sanctioning body aligned with the United States Boxing Association. Then in 1983, the IBF was recognized as a major sanctioning body.

IBF president Daryl Peoples explained to the Sunday Puncher in February 2018 how the organization goes about determining mandatory challengers for their champions.

"In the IBF we like to have elimination bouts, so we have the No. 1 and the No. 2 positions unranked until we find the two highest available contenders to fight for the No. 1 position," Peoples said. "Once you win an eliminator for No. 1 or No. 2, that makes you eligible to be a mandatory contender and fight for the championship."

The World Boxing Association, the oldest of the four major sanctioning bodies, was formed in 1962. The WBA has two championships: a "Regular" and a "Super" titleholder.

If a fighter has a WBA title, but then wins either the IBF, WBC or WBO belt, they get moved up to WBA "Super" champion. The "Regular" title then becomes vacant for two contenders to compete for.

The WBA determines its mandatory challengers the same way as the IBF. The "Regular" heavyweight champion is Manuel Charr and the "Super" titlist is Joshua. It is unlikely they will fight each other and instead will defend their separate belts.

Many boxers regard the World Boxing Council as the most prestigious heavyweight belt in the sport. The WBC came into existence one year after the WBA in 1963. The WBC has held some of the most high profile fights in the history of boxing, including both Wilder vs. Fury fights. When you're the WBC champion in any weight class, many pundits consider that individual to be the premier fighter in their respective division.

Regarding the customary green belt, there are 161 flags of the countries that represent the sanctioning body. The WBC has four different types of championships. The Diamond belt, which is an honorary championship given to the winner of a historic fight, such as when Floyd Mayweather Jr. and Manny Pacquiao fought in May 2015. The Silver belt is essentially considered a secondary belt. The Eternal Championship is designated for titleholders that have never lost the belt or retire undefeated while having a series of consecutive title defenses.

In terms of the mandatory challenger, a champion is supposed to make one title defense a year, but a step-aside fee can be negotiated so a voluntary championship can occur.

The World Boxing Organization is the youngest sanctioning body of the four major titles. The WBO came into existence in 1988. However, it wasn't fully recognized as a major world title until 2004, when it got the final blessing from the WBC. Like the WBC in the heavyweight division, a champion has to defend the title once a year. For Joshua, the WBO mandatory hasn't been fulfilled. If he has to vacate the belt, the top two contenders would compete for the vacant championship.

The WBO handbook says it rates its fights by the quality of competition, frequency of competition, positive television exposure, good relationship within the WBO community and no drug-related problems.