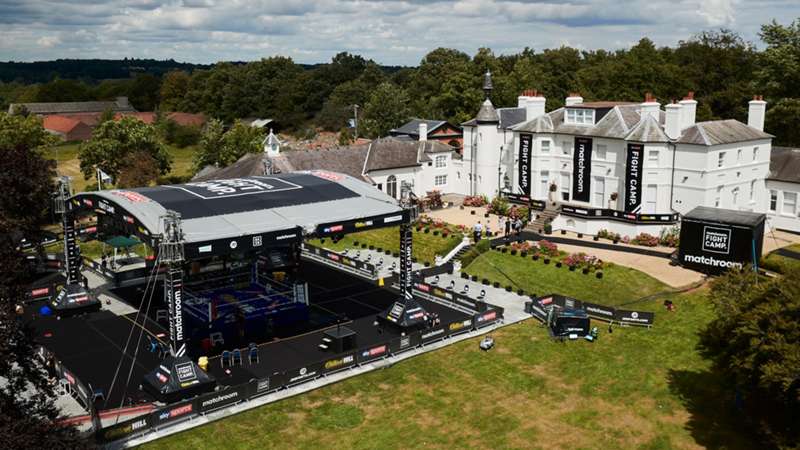 For two summers in a row, Matchroom have changed the game from within their own back garden — literally.

I can vividly recall the days before Matchroom Fight Camp 1, the four-event boxing series that began on August 1, 2020. It helps that the circumstances surrounding live sports — and the entire world as we knew it — were so unique back then.

Boxing had been scrapped for four months, which in a landscape of weekly Saturday fight nights across a myriad of promoters, weights and continents, was inconceivable before COVID-19 did what it did. And given the uncertainty and panic of it all, nobody really knew when we'd ever see a large crowd gathered under one roof again.

Recognising the importance of returning live sport to television during times of social restrictions as football chiefs and more scrambled to finish their own delayed seasons and tournaments, Matchroom Boxing chief Eddie Hearn devised the idea of staging shows on the sizeable grounds of his company's HQ in Brentwood, Essex.

The concept would get boxers back into the ring before the rust grew serious. It would give fans something to enjoy during tough times. And it would operate alongside other admirable efforts from fellow promoters in TV studios and empty venues across Britain and the United States in easing back towards normality, slowly but surely.

It was the start of a brave new era, and it was very well-received. Fights such as Sam Eggington vs. Ted Cheeseman, Terri Harper vs. Natasha Jonas and Katie Taylor vs. Delfine Persoon 2 delivered in a big way, and the four-week experiment ended in explosive fashion as Alexander Povetkin stunned Dillian Whyte with as good a one-punch upset as you'll ever see.

In the 12 months since, select fights have welcomed sizeable crowds — one of the biggest being Saul 'Canelo' Alvarez adding Billy Joe Saunders' WBO super-middleweight title to his growing collection in a Texas spectacle again promoted by Hearn. However in an interview with me for DAZN, Hearn admitted he considers the born-to-adversity Fight Camp as his biggest achievement, over Canelo-Saunders and other huge fight nights such as Froch vs. Groves 2 and Joshua vs. Klitschko.

“We’re very proud of Fight Camp,” he explained. “Despite all the other huge events we’ve put on across the globe, it was probably our proudest moment.

“It came out of a national disaster in COVID-19 and the inability to do what we love to do: fill up arenas, create amazing atmospheres and incredible live spectacles.

"The challenge of the first Fight Camp was one that we will never forget but one that we learned so much from."

Now, in a world where the coronavirus continues to force preventative action but the vaccination programme offers hope, crowds are returning to sporting events with increasing size and frequency. Perhaps 'normal', as opposed to 'the new normal', is on the horizon. Nonetheless, Hearn stressed the personal importance of establishing Fight Camp as an annual tradition.

On July 31, Fight Camp 2 commences. The scheduled bouts are as well-matched and intriguing as last year. And this time, a limited number of fans will be there. Food and drinks vendors are planned in what promises to make the three-card schedule akin to the 'Glastonbury' or 'Wireless Festival' of combat sports. Those who have attended a PROGRESS Wrestling event at Alexandra Palace in London will be familiar with the set-up and its benefits.

The first of the three, headlined by Conor Benn vs. Adrian Granados, will also be the first Matchroom event in a long time to be screened somewhere other than Sky Sports in the UK and Ireland, as Hearn's new deal with DAZN kicks off with FC2. While far from the adversity and concerns of last summer, Hearn once again embarks on a brave new quest to add entire new dimensions to boxing, and he once again uses his back-yard brainchild to do so.

The way things are going, no matter how many huge stadium events Hearn ultimately stages in his promoting career across various continents with various big names on the marquee, Fight Camp looks set to serve as his seasonal curtain-raiser, his trademark offering and his legacy-defining concept.

As a result, I for one cannot wait to grab a burger, order an ice cold beer and watch the action unfold as if I were in the crowd at Glasto watching The Cure or The Rolling Stones. And I strongly suspect there won't be anyone yelling "I can't get no satisfaction" this summer at Mascalls.