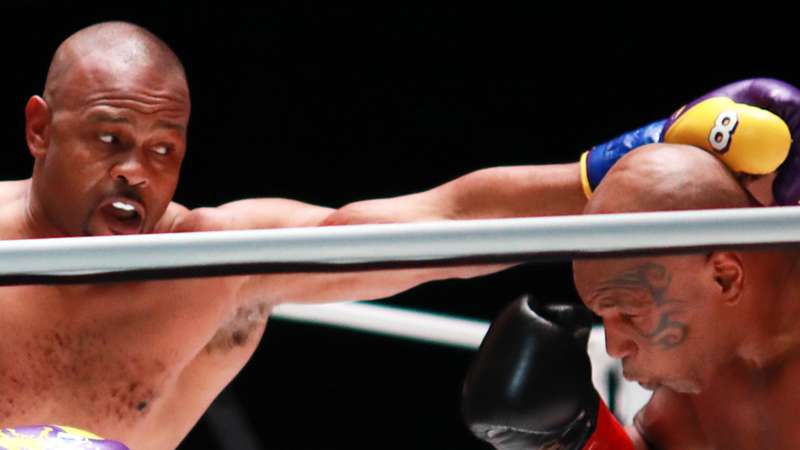 The boxing legends showed mini flashes of what they were in their primes Saturday night at the Staples Center in Los Angeles.

Mike Tyson came out of his corner in hot pursuit, stalking Roy Jones Jr. around the ring and landing punches with ferocity. Jones flashed some of his classic deception and slick boxing skills, catching "Iron Mike" with no-look jabs and precise, pointed shots at times.

Although the 54-year-old Tyson and 51-year-old Jones weren't anywhere close to what they once were as rulers of the ring during their respective primes, they offered boxing fans 16 minutes of competitive action over eight rounds in their exhibition bout Saturday night at Staples Center in Los Angeles and live on pay-per-view. By the end of the bout, WBC judges Christy Martin, Vinny Pazienza and Chad Dawson called the bout a draw. DAZN News had it 79-73 for Tyson, who looked to be in better shape and was the more active fighter.

"Yeah," Tyson said when Jim Gray asked him if he thought he won the fight, "but I'm good with the draw."

Jones wasn't satisfied with the draw at all.

However, Jones did call the experience of facing Tyson a "bucket list" writeoff, while adding that "everything hurts" after experiencing the former undisputed heavyweight champ's power shots.

Tyson, as predicted, was the aggressor, giving chase to Jones and landing some of his signature hooks to the body and face with the ferocity that he was known for over the 1980s and 1990s. Jones resorted to clinching early, but was able to pick and choose some of his potshots, showing a sliver of wizardry and magic that made him an elusive four-division world champion. Although those moments were seldom, the bout offered a blast of nostalgia that should've pleased boxing fans and a captive casual audience as the COVID-19 global pandemic continues.

Tyson assured Gray that he'll fight again, while Jones said he'll talk things over with his family before making a decision.

Here's how the entire Tyson vs. Jones main card went.

Jack walking McKernan down and punishing his body

Badou Jack vs. Blake McKernan is up next

French Montana performing with his own set

Ortiz stops Albright in the seventh round

Ortiz drops Albright with a crunching, punishing uppercut to the liver! He then digs in with a serving of uppercuts until the ref steps in and ends it for the seventh-round TKO.

facebook twitter whatsapp
Ortiz, in particular, is really sitting on his punches and landing shots with bad intentions here in the fourth round of this bout, which is scheduled for eight. This has been an entertaining fight.

Jamaine Ortiz vs. Nahir Albright are opening up this pay-per-view

Wiz taking us through some of his hits to open things up.

facebook twitter whatsapp
Keep it parked here for all the live updates, results and highlights from the Mike Tyson vs. Roy Jones Jr. main card.