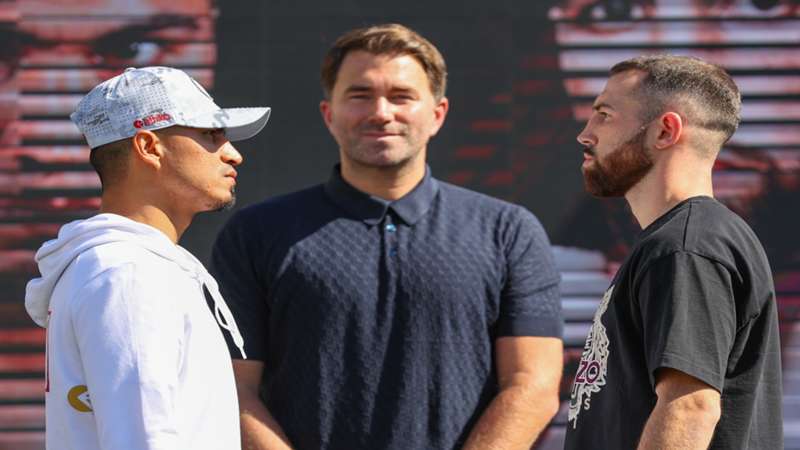 Fists are going to fly in Fresno.

FRESNO, Calif. — The hot sun was beaming down on Mikey Garcia and Sandor Martin when they stepped on the stage to begin their final pre-fight press conference in center field at Chukchansi Park ahead of Saturday's card in front of what Matchroom Boxing Promoter Eddie Hearn expects to be over 7,000 people inside the baseball facility.

The heat will be on Garcia (40-1, 30 KOs) as he steps into the ring for the first time in almost 20 months. Many of boxing's marquee names have returned since the COVID-19 global pandemic temporarily shut the sport down for a couple of months in 2020. Garcia is the biggest fish that hadn't returned. He changes that on Saturday and plans to remind fans he's still around and isn't going anywhere.

"I’m ready to show the world that I’m still here," Garcia said. "I keep reminding everybody that I’m here. I haven’t left. There’s still much more from Mikey Garcia to give the fans. This is just another fight to give back and show them."

Martin (38-2 13 KOs) steps inside the ring not only for the first time in the United States but against his most formidable challenge and most notable foe to date. However, the former European super-lightweight champion understands what lies before him and plans to make the most of this chance.

"It’s a great opportunity, and I have to take advantage of it against a great champion like Mikey Garcia," Martin said. "That’s why I got involved in boxing. To accept the great challenges and to achieve my dreams. I’ve worked all my life for this opportunity."

Some have questioned why Garcia is taking on Martin when he's always been about taking the biggest fights possible. Because of COVID-19 putting boxing on hiatus along with fans not being allowed in venues for the majority of the year when the sport returned and then attempted to make bouts with Manny Pacquiao, and Regis Prograis failed to come to fruition, Martin was the best choice among three people for his return to vault him back into the position he desires.

"I did take the fight with Jessie (Vargas in February 2020)," Garcia said. "We had plans to have a great year. Because of the pandemic, everything went silent. I’m excited to finally get back, get into the groove of things, and look for much bigger fights. I want big title fights. Those are the fights that excite me the most. That’s why this is another step in that direction."