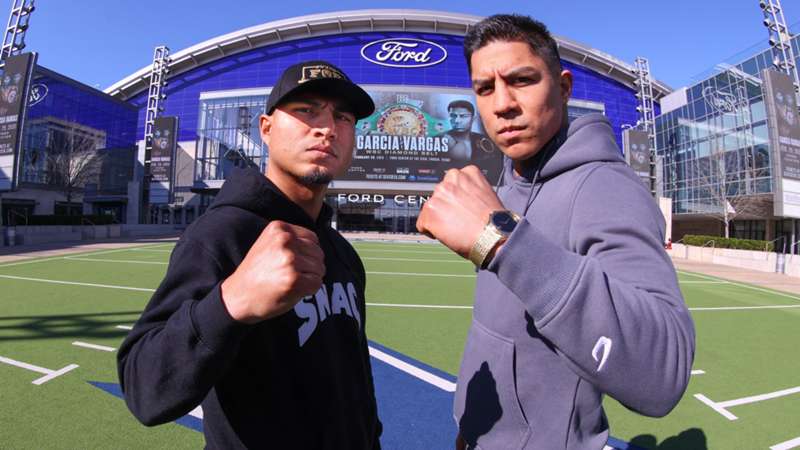 Will four-division world champion Garcia be able to gain some traction at welterweight vs. Vargas?

Mikey Garcia's first crack at the welterweight division didn't go as planned. But that was against one of boxing's pound-for-pound best in Errol Spence Jr., who shut him out in a unanimous decision last March.

Now, nearly a year later, Garcia returns to the ring in attempt to solidify himself at 147 pounds when he takes on Jessie Vargas at The Ford Center at The Star in Frisco, Texas, live on DAZN.

While there's no shame in losing to a boxer the caliber of Spence — especially considering that Garcia moved up two weight classes to test his skills — he does believe that his first pro loss gave him a hard lesson learned.

"When I got in the ring with Errol, it just wasn't my night," Garcia told DAZN News earlier in the month. "I felt slow. I felt sluggish. I felt weak. I felt tired. Everything that could have went wrong, went wrong. ...

"I know there’s a lot more that I can do. I hope that on the 29th of February, I will answer all of those questions," he added. "I will give all the fans a great performance that they can really look at me and be like, 'This guy is a true contender at welterweight. He can actually fight at welterweight.'"

This will mark Garcia's first fight since announcing his short-term deal with Matchroom Boxing USA's Eddie Hearn to fight on DAZN. Vargas intends to make sure that Garcia's debut on DAZN starts with a stiff test. After battling Adrien Broner and Thomas Dulorme to draws in 2018, Vargas scored a sixth-round TKO of Humberto Soto last April. Now, he can't wait to take on Garcia.

“It’s a big fight for fight fans, it’s one people have wanted for a long time now,” Vargas said in a Matchroom Boxing USA press release statement. “We are giving them what they want to see; it’s going to be a great showdown. He’s a warrior and so am I. We both always go for the win and do anything possible to get it.”

Can Mikey Garcia compete at 147? Can Jessie Vargas win the big fight?

Two men enter on Saturday, one question gets answered ✨ pic.twitter.com/PkgWo1ftUw

Will Garcia get his feet set at welterweight behind a solid victory or will Vargas prove that the four-division world champ picked the wrong one to scrap with?

The Mikey Garcia vs. Jessie Vargas undercard kicks off at 6 p.m. ET, with the main card slated for an 8 p.m. start. Heavyweight Joseph Parker opens the main card against Shawndell Winters. Garcia and Vargas are expected to take their ring walks about 11 p.m., although the exact time depends on the length of the earlier fights.

Garcia vs. Vargas live stream: How to watch

The Garcia vs. Vargas card can be seen on DAZN, the global sports live streaming service.

Comcast customers can sign up for DAZN on Xfinity Flex or X1.

How much does Garcia vs. Vargas cost?

A monthly subscription to DAZN runs $19.99, and an annual subscription is $99.99. (In Canada, the pricing options are $20 CAD per month or $150 CAD per year.) Current subcribers will have the fight already included as part of their plan.

DAZN subscribers can stream the Garcia vs. Vargas card and many other live events and original programming options included in DAZN's multi-sport offering.

Where is the Garcia vs. Vargas fight?

Garcia vs. Vargas will take place at The Ford Center at The Star in Frisco, Texas. This marks Garcia's second straight fight in the "Lone Star State" as his loss to Spence was held at the AT&T Stadium in Arlington — home of the Dallas Cowboys. Overall, this will be Garcia's 10th pro fight in Texas, where he continues to be a big draw, but his first at The Ford Center at The Star. Meanwhile, this bout will mark Vargas' first pro fight in Texas.