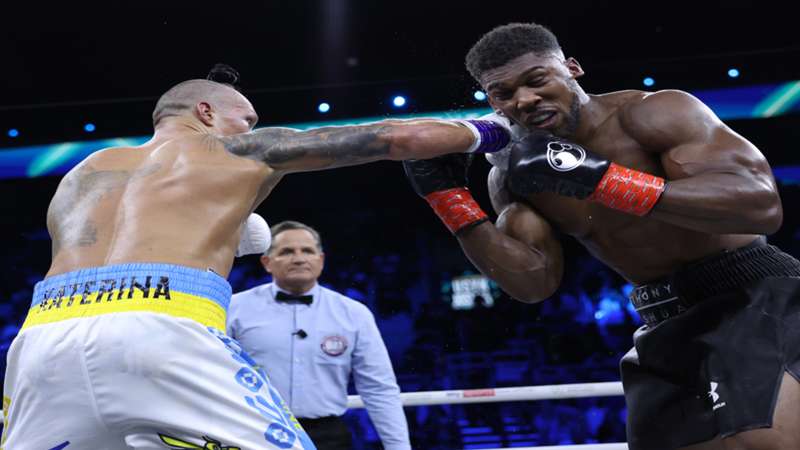 Mark Robinson/Matchroom Boxing
Check your region for Canelo vs. Golovkin on DAZN

Oleksandr Usyk gets it done one more time.

Last September, Oleksandr Usyk removed all doubt that he was a serious heavyweight when he produced a dominant display to dethrone Anthony Joshua and win three heavyweight titles. The question coming into Saturday's rematch was could Usyk have a repeat performance, or would Joshua be able to make the necessary adjustments and become a three-time heavyweight champion?

Joshua made some of the necessary changes, but when it counted, Usyk exemplified his exceptional boxing skills in the championship rounds to beat the Englishman by split decision (113-115, 116-112, 115-113) to retain the IBF, WBA (super), and WBO heavyweight titles and capture the Ring title in Jeddah, Saudi Arabia. DAZN had the fight scored 115-113 for Usyk.

It was a tactical affair through the opening four rounds with neither guy able to gain a clear cut advantage. Starting in the fifth round, Usyk and Joshua started to let their hands go with Joshua putting an emphasis on the body while Usyk focused upstairs.

Usyk survived the onslaught and made it out of the round. He came out with a vengeance in the last three rounds of the fight. He used his slick techniques to confuse Joshua and almost send him to the canvas in the tenth round. With the fight hanging in the balance in the 12th and final round, Usyk didn't put the foot on the gas pedal. Instead, he went right at Joshua with power, combinations, and volume punches. His work in the last three rounds helped him to hold onto the gold and record a successful first title defense.

According to CompuBox, in the last three rounds, Usyk threw 232 punches compared to 149 for Joshua and outlanded him 79-29.

What's next for Usyk? With WBC champion Tyson Fury once again announcing his retirement last week, it appears that is unknown. Usyk isn't buying what Fury is trying to sell everyone. Usyk made it clear that if Fury is retired, he is sitting on the sidelines.

Here is what happened at Oleksandr Usyk vs. Anthony Joshua 2.

facebook twitter whatsapp
Usyk comes right out with a flurry to begin the final round. Joshua comes back with a left and a right to the body. Usyk with a right to the body. Joshua is exhausted. Usyk comes back with another combination. Joshua is trying with everything he can, but Usyk fires a straight left. A great way to close the show for Usyk, as he should get the nod here. (10-9 Usyk, 115-113 Usyk)

facebook twitter whatsapp
A right to begin the seventh for Usyk. A right from Joshua but fires a combination to the body and a straight left that snaps Joshua's head back. Left to the body for Usyk. Joshua is falling into the same traps as the first fight. Needs to make an adjustment. (10-9 Usyk, 67-66 Usyk)

facebook twitter whatsapp
Joshua pops right up and fires a left jab. Right hand for Joshua. Left hand connects for Usyk. Straight left sends Usyk to the ropes. Right lands for Usyk, and Joshua lands one of his own. Right to the body by Joshua. Straight left for Usyk. Right hook for Joshua. (10-9 Usyk, 48-47 Usyk)

facebook twitter whatsapp
Not much in the first 45 seconds. Exchange of jabs. A right to the body from Joshua. A left from Usyk and then another one around the guard. A good right hook from Usyk. A right hook for Joshua. Laser left down the middle from Usyk at the horn. (10-9 Usyk, 38-38)

facebook twitter whatsapp
A straight left sends Usyk back to begin the third. A solid right hand by Joshua. Overhand right from Joshua after getting sliding away from an Usyk jab attempt. Three-punch combination to the body. A one-two for Usyk. Straight left from Usyk. Right hook moves Usyk back, and a left connects as the bell sounds. (10-9 Joshua, 29-28 Joshua)

Usyk vs. Joshua; Round 1

Usyk won the first fight in September. Can he do it one more time? Can Joshua figure out the Usyk puzzle? We are about to find out.

That was a gift from the judges. Hard to see how Hrgovic won. He got dropped in the first round, Zhang landed the harder and more significant blows.

Something to watch out for if Usyk vs. Joshua goes the distance.

Down goes Hrgovic in round one

facebook twitter whatsapp
What a start for Zhang! After getting dominated for the bulk of the round, a looping right behind the ear puts Hrgovic on the deck. Once Hrgovic made it back to his feet, Zhang connected on a hard left which staggered Hrgovic. What a development as Zhang now has the momentum.

facebook twitter whatsapp
It's time for the co-main event of Usyk vs. Joshua 2 as Filip Hrgovic (14-0, 12 KOs) faces off against Zhilei Zhang (24-0-1, 19 KOs) in an IBF heavyweight title final eliminator.

The winner becomes the mandatory challenger for the winner of the main event.

Since the last fight ended early, this one gets bumped up to the main card instead of after Usyk and Joshua.

AJ is in the building