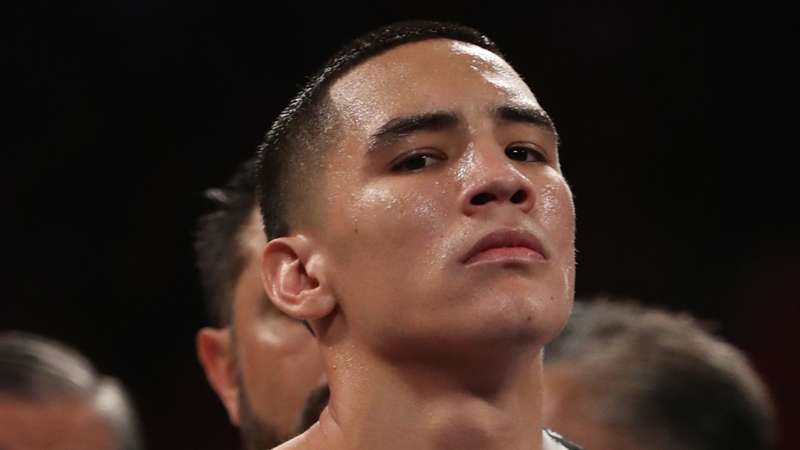 Up next is a fight with WBC junior lightweight champion Miguel Berchelt.

Oscar Valdez prepared and trained for Andres Gutierrez for eight weeks, only for Gutierrez to tip the scale Friday overweight by an absurd 11 pounds, which disqualified him from the fight.

Unable to get his hands on Gutierrez, Valdez had to survive a second-round knockdown to score a seventh-round TKO against his short-notice opponent, Adam Lopez, on Saturday night. With the win, Valdez gets a shot at WBC junior lightweight champion Miguel Berchelt, who was in attendance at the Cosmopolitan in Las Vegas.

A game Lopez used a left uppercut to drop Valdez in the second round and was winning on the scorecards through the sixth round. Then Valdez showed his mettle in Round 7.

WHAT A RALLY!!@oscarvaldez56 survives an early knockdown, then drops and stops Adam Lopez in the closing seconds of the 7th round.

Valdez caught Lopez with a left hook that landed flush on his opponent's chin and then added a lunging right that dropped Lopez with a thud against the ropes.

Smelling blood, Valdez (27-0, 21 KOs) landed a hard right hand seconds later and added a barrage of punches before the referee stopped the action in the waning seconds of the round. The stoppage was arguably too early as Lopez showed enough to keep fighting.

"I would've been fine," Lopez said in the ring following the stoppage.

The 23-year-old Lopez made a name for himself despite the loss given the impromptu opportunity. Valdez, meanwhile, can look to fill holes in his game before fighting Berchelt.

Frampton launched a savage attack to McCreary’s body from the opening bell and kept digging.

A punctuating, Roy Jones-esque double left hook to the body made McCreary take a knee in the ninth round, just as a left hook to the liver dropped McCreary in the sixth. The onslaught paved the way for a shutout victory (100-88, 100-88, 100-88) for Frampton, who will get a crack at WBO junior lightweight champion Jamel Herring next.

Teixeira, his face covered in blood and getting badly battered, somehow found an opening to land a right hook to the temple and a left hook across the chin to send Adames stumbling backward and tasting the canvas. The seventh-round knockdown proved to be the difference on the judges' scorecards, as Teixeira was announced the winner by unanimous decision (116-111, 114-113, 114-113).

The 116-111 scorecard was far too generous; it could be argued that the scores should have been in favor of Adames, who could not believe that his hand wasn't raised.