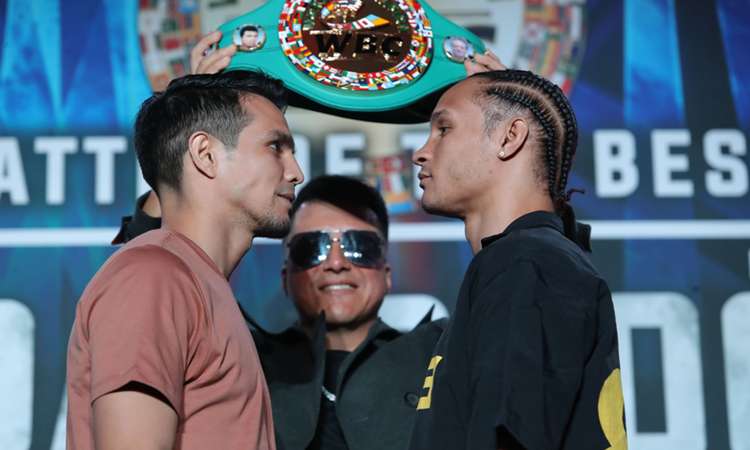 The wait was worth it, after three years of searching for the opportunity, Regis Prograis was crowned WBC super lightweight world champion by knocking out Mexican Jose Zepeda in 11 rounds.

In a 12-round fight in Carson, California, Prograis found the perfect combination to dominate and control a natural puncher, and eventually bowed him out and handed him his third loss.

However, the fight was not an easy one and Prograis himself acknowledged the difficulty in coming out on top.

"I want to take my hat off, Zepeda gave me the toughest fight of my career, he will be champion. Don't put your head down, you put up a great fight. The toughest of my 29 fights," said Rougarou still in the ring.

Zepeda started the fight at a very good pace, analyzing the weak points and throwing a couple of warning punches, but the strategy was not evolving and without releasing his fists the fight began to get complicated little by little.

Prograis with a lot of lateral movement, feints, and waist took the Mexican out of rhythm and took advantage to impose his timing.

With Zepeda's corner telling him that they were ahead on the scorecards, Chon did not adjust and when he felt the pressure in the final stretch of the fight he found himself with a combination impossible to assimilate and visited the canvas.

With the smell of blood in the air, Prograis went for a knockout and didn't stop until Zepeda went down again and the referee had to stop the fight.

At the end of the fight, after scoring the 28th win of his career, Prograis ruled out mentioning any of the fighters who could be on his list for the future, he assured that now it is their turn to go after the title he has just won.

Don't miss the minute-by-minute of the fight here.

"I want to congratulate Chon Zepeda. He gave me the toughest fight of my career. Hats off to Zepeda, he will be world champion. In the second and third round I felt more comfortable. I trained very well for this fight and I took him to deep water to drown him", Prograis.

"I'm not going to say anyone's name, now I'm a two-time world champion, now they'll have to say my name".

A straight right to the chin and a left hook to the face was the combination that undermined Zepeda and although the Mexican used the ropes to avoid falling to the canvas, Prograis kept attacking until he knocked Chon down. The referee stop the actions.

facebook twitter whatsapp
A left hand hook staggered Prograis at the end of the round. Prograis is bleeding from the nose.
Zepeda managed to take the punishment and respond. But he looks more confident

facebook twitter whatsapp
Chon Zepeda's powerful left hand has been conspicuous by its absence. He hasn't taken it out in the whole fight.
Prograis does the bare minimum to keep the lead.
Chon closes with a pair of liver hooks.

facebook twitter whatsapp
Chon continues listening to his corner, who tell him that they are winning on the cards. However, he has not adapted to a strategy that is not working. Prograis takes advantage with a more fluid pace.

facebook twitter whatsapp
Prograis' double jab breaks the rhythm of Chon Zepeda. The Mexican finds it hard to adapt, it's not his style to go backwards. He will have to activate - in the second part of the fight - the plan B.

facebook twitter whatsapp
Prograis continues to manage the timing of the fight and that gives him a big advantage. At the end of the round, things heat up and with a couple of hard hooks to the face, but the bell sent them to a break.

facebook twitter whatsapp
Zepeda is not adjusting its strategy and is allowing Prograis to move forward. An unintentional collision causes a cut on Chon's right eyelid.

facebook twitter whatsapp
Prograis continues with speed, not letting up on the feints that keep Chon busy. Rougaru managed to land a couple of dangerous lefts.
The riskiest moment was when the two crossed each other with hooks to the jaw and showed resistance.

facebook twitter whatsapp
Prograis was much finer in his punching, especially with a couple of left hands that he placed in the Mexican's face. Prograis maintained control of this round, despite Chon's responses.

facebook twitter whatsapp
Both opponents used the first round to study each other. They used a lot of jabs and focused on measuring their chances, but did not miss the opportunity to connect with some warning shots.

Chon Zepeda is the last to enter the ring

Chon Zepeda feels that in this fight he will break the bad luck that followed him in his two previous title opportunities.
But he knows that it will not be an easy fight.

Regis Prograis is the first to walk to the ring

facebook twitter whatsapp
Prograis was champion until he ran into Josh Taylor pad in 2019 (his only defeat so far).
He comes in with a record of 27-1 with 23 KOs.

By majority decision, Yokasta Valle won a second division. She managed to overcome the height and weight difference of Argentina's Bermudez.

It's time for a women's boxing match

Yokasta Valle is willing to defeat Evelin Bermudez from Argentina to take away the titles her WBO and IBF crowns in light flyweight.The fight is scheduled for 2 minutes per 10 rounds.

Yokasta is the actual minimum queen of IBF and WBO

Guess who is already in the arena?

facebook twitter whatsapp
With Curtis down in the third round, Jalolov came out to finish his opponent in the fourth.
The referee chose to stop the action.
The heavyweight Jalolov improved his record to 12-0, with 12 KOs.