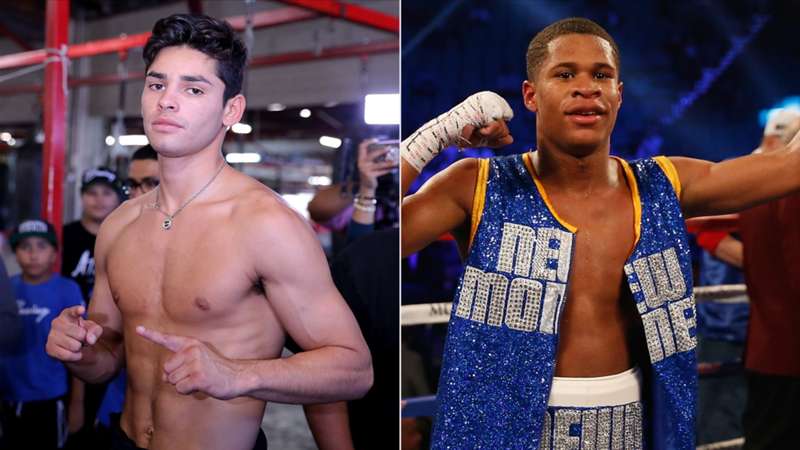 The WBC champion will have to wait for a mandatory challenge.

Promoter Eddie Hearn believes that Ryan Garcia is escaping scrutiny for failing to agree a fight with Devin Haney.

22-year-old Haney is the WBC champion and Garcia, also 22, is his mandatory after defeating Luke Campbell earlier in the year, but he has spent much of his time since victory talking up fights with Manny Pacquiao and Gervonta ‘Tank’ Davis.

Matchroom’s Hearn does not understand Garcia taking on a tough fight to become a mandatory challenger only to refuse to engage with the chance of a fight.

“I still feel like if you fight a fight to become mandatory like he did against Luke Campbell, you should fight the champion, that’s the whole reason that you enter a final eliminator,” he told DAZN’s Ak & Barak Show.

Instead, Haney will fight Jorge Linares and Garcia will take on Javier Fortuna, with speculation they will then meet in the autumn, a possibility that would satisfy Hearn.

“Ryan refused to fight Devin Haney, so we applied to fight Jorge Linares, then they made Garcia fight Fortuna. No problem, two great fights, as long as we get the fight we want at the end.

“It skirts the issue that the media kind of refuses to mention, that Ryan has refused to fight Devin Haney, and he was his mandatory.

“It's a tough fight. He’s going to get a quarter of the money to fight Fortuna than he would to fight Haney. It’s just frustrating because Ryan Garcia is a great fighter but he keeps talking about all these challenges when there’s one right in front of him.

“All being well if the winners of those two fights do meet in the fall, then it will have worked out perfectly. But I feel like we have to put the pressure on if these two guys win.”

When it was suggested that Garcia might be delaying a fight in order to bring fans to a bout in California, Hearn gave the idea short shrift.

“It’s not true because we’ve got 70,000 people watching Billy Joe Saunders vs Canelo [Alvarez] in Dallas. We’ve got 15,000 in Miami. In July there will be fans back in California, unquestionably,” he said.