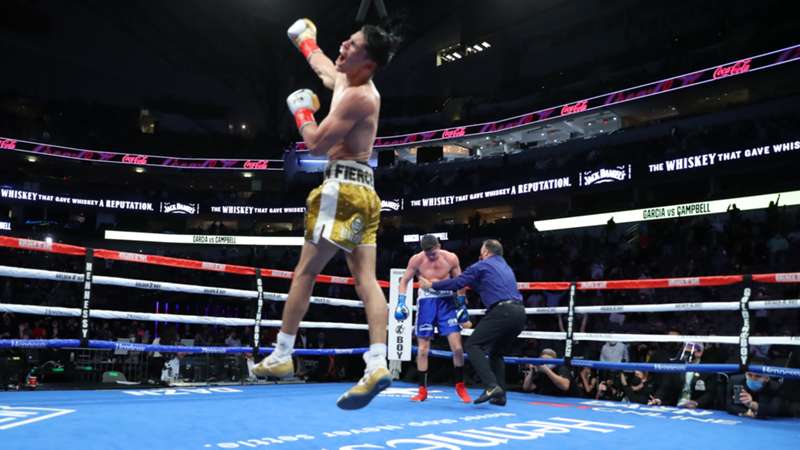 Ryan Garcia gets his career-defining win and had to overcome being knocked down to notch it.

Could Ryan Garcia rise to the occasion in the biggest fight of his career? Garcia answered the question with a resounding yes and showed he can overcome adversity along the way.

Luke Campbell dropped Garcia in the second round but "King Ry" dusted himself off and delivered a vicious body shot that sent the Englishman packing for an emphatic seventh-round knockout to capture the interim WBC lightweight title. DAZN News had the fight scored 58-55 in favor of Garcia at the time of the stoppage.

"I chose to be a champion tonight," Garcia said in his post-fight interview.

Things went Garcia's way in the first round and were looking the same in the second. However, Campbell flipped the script and put Garcia down for the first time in his career with a flush straight left hand.

Instead of getting flustered and frustrated like most 22-year-olds would in that situation, Garcia made his way back up to his feet and was calm and collected.

Garcia remained composed and didn't get caught up in trying to fight fire with fire. He stuck to the game plan by throwing combinations and like his friend and mentor, Canelo Alvarez, started digging into Campbell's body with the left hand, which proved dividends later on in the fight.

Garcia's (21-0, 18 KOs) power was taking its effect on Campbell. The Englishman was wearing down with one hard shot after another. The knockdown count was almost levelled at the end of the fifth round when Garcia rocked Campbell with a left hand that nearly sent him through the ropes.

While Campbell survived the onslaught in the sixth, he didn't in the seventh as Garcia landed a thudding body shot with the left hand to send the 2012 Olympic gold medalist to a knee with both gloves on the mat. As the referee was counting, one could tell Campbell wouldn't make the count.

He rose to his feet when the official had already made it to 10, as Garcia jumped up in excitement and into the arms of Alvarez.

"I knew it was going to be a body shot a long time ago because God told me so," Garcia said.

Here is what happened at Ryan Garcia vs. Luke Campbell.

Garcia knocks Campbell out with a punishing body shot at 1:58 of the seventh round! Garcia is now the interim WBC lightweight champion.

facebook twitter whatsapp
Garcia continues applying the pressure and looking for the finish, going to the body. To Campbell's credit, he avoids being sent to the mat. (10-9 Garcia, 58-55 Garcia)

facebook twitter whatsapp
The round has been pretty even up to this point. And then out of nowhere with seconds remaining, Garcia lands a left hand which nearly sends Campbell through the ropes. The bell saves Campbell. (10-9, 48-46 Garcia)

facebook twitter whatsapp
Nice to see Garcia throw combinations. Even if they get blocked, it shows Campbell he's going just for the knockout. I spoke too soon as Garcia stuns Campbell with a right hand. Campbell comes back with a hard right at the end of the round. A very close round. (10-9 Garcia, 38-37)

facebook twitter whatsapp
Give Garcia credit for the way he's bouncing back here. Instead of retreating, Garcia has been the aggressor and landing the harder shots. Can Campbell now make an adjustment? (10-9 Garcia, 28-28)

facebook twitter whatsapp
Garcia looked to have things well in control by applying pressure and using his lightening quick hands. But Garcia got a little too comfortable as he dropped his hands a bit and Campbell made him paid for it. Campbell lands a jab to the body and then drops Garcia with a left hand. Garcia makes it back it to his feet. Garcia showed some heart in battling on. How does Garcia now make the adjustments? (10-8 Campbell, 19-18 Campbell)

facebook twitter whatsapp
An entertaining opening round from Garcia and Campbell. Campbell had his moments by connecting with the left hand. But Garcia is landing more significant punches. (10-9 Garcia)

facebook twitter whatsapp
It's time for the main event as Ryan Garcia battles Luke Campbell for the interim WBC lightweight title. All the talking is done and it's time to duke it out. Can Garcia continue his rapid ascent or will Campbell bring the train to a halt?

Gutierrez def. Alvarado by unanimous decision (113-112, 113-112, 113-112) to capture the WBA (regular) super featherweight title. A very close fight that was on the line going into the 12th and final round. A left hook from Gutierrez to send Alvarado to the canvas for the third time in the fight proves to be the difference to give Gutierrez the nod.

facebook twitter whatsapp
What a turn of events as halfway through the round, Gutierrez sends Alvarado to the canvas for the third time in the fight with a clipping left hook. But for some reason Gutierrez isn't going for broke and attempting to put Alvarado away when the bout is hanging in the balance. What a mistake here as Alvarado survives. We go to the judges scorecards. (10-8 Gutierrez, 113-112 Alvarado)

facebook twitter whatsapp
Alvarado is continuing to throw and doing so from every angle. Gutierrez's trying to hang on and not get stopped. He needs a stoppage heading into the final stanza. (10-9 Alvarado, 105-102 Alvarado)

facebook twitter whatsapp
You want to feel bad for Gutierrez. You really do. But he's letting this fight slip away from him. Alvarado is relentless and not letting up. (10-9 Alvarado, 95-93 Alvarado)

facebook twitter whatsapp
Alvarado has regrouped here and is in total control. Gutierrez is exhausted and slowing down. Gutierrez is looking for a one-hitter quitter and Alvarado isn't giving him the chance to land it. (10-9 Alvarado, 85-84 Alvarado)

facebook twitter whatsapp
Alvarado is sticking to the gameplan. He's staying on the inside and just peppering Gutierrez with every punch imaginable. (10-9 Alvarado, 75-75)

facebook twitter whatsapp
A highly competitive round. Alvarado continues the pressure with no answer yet from Gutierrez. Have to wonder why Gutierrez hasn't figured out how to combat the onslaught. (10-9 Alvarado, 66-65 Gutierrez)

facebook twitter whatsapp
This is some comeback from Alvarado. Can't believe how he's rebounded. The better fighter is shining through here. (10-9 Alvarado, 57-55 Gutierrez)

facebook twitter whatsapp
Alvarado has all the momentum. The jab is on point and Gutierrez is starting to grow impatient. (10-9 Alvarado, 48-45 Gutierrez)

facebook twitter whatsapp
A good bounce-back round for Alvarado. He starts getting into a rhythm with the jab while Gutierrez looked to take his foot off the pedal. (10-9 Alvarado, 39-35 Gutierrez)

facebook twitter whatsapp
Gutierrez sends Alvarado to the canvas early in the round but the champion gets up. Alvarado looks shaky on his feet. Gutierrez is trying to put Alvarado away and drops him once again. Alvarado isn't looking right here. Gutierrez is unloading everything to close the show but Alvarado survives. (10-7 Gutierrez, 30-25 Gutierrez)

facebook twitter whatsapp
Can see Gutierrez having the succint power advantage. His shots right now have more pop in them. Alvarado is trying to box. But how long should that last? Can only absorb blows like this for only so long. (Gutierrez 10-9, 20-18 Gutierrez)