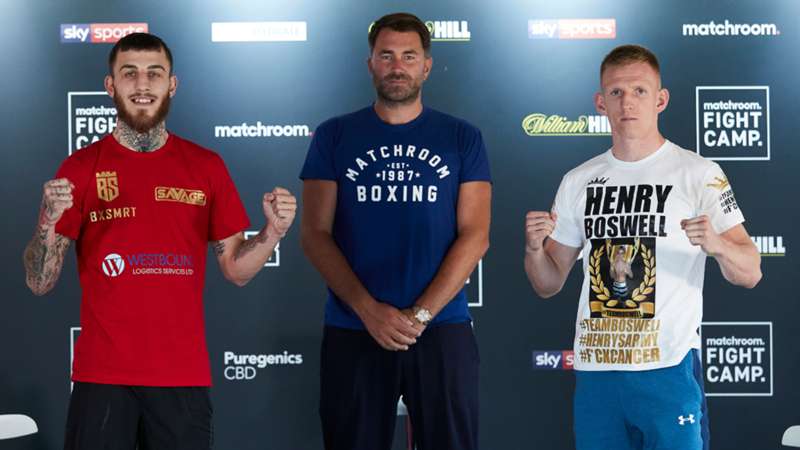 It's fitting that the first post-lockdown card for Eddie Hearn's Matchroom Boxing is main evented by a match that wouldn't happen so soon if not for COVID-19.

The COVID-19 pandemic hasn't delivered much in the way of good news, but Matchroom Boxing's Fight Camp 1 on Saturday gives boxing fans an unexpected treat in the form of Sam Eggington vs. Ted Cheeseman.

Both Eggington (28-6, 17 KOs) and Cheeseman (15-2-1, 9 KOs) were likely to be given a few more fights before crossing paths, after some ups and downs in their last 10 respective outings. And without a lockdown grinding boxing to a halt for several months, it's hard to see this collision for the IBF International super-welterweight title happening until both of Eddie Hearn's clients were carrying more status behind them.

Nonetheless, the fighting spirit of both competitors has shone through under these unprecedented circumstances as they return to the ring with a bang on Saturday.

Hearn admitted the sight of boxing in his office back yard after the sun sets will be unique.

While introducing both main eventers during the final press conferences for this weekend's card, he said: "This one will be in full darkness with house lighting, maybe a bit of London backdrop and who knows? Maybe some fireworks and a little ‘Sweet Caroline’ before the ringwalks."

Unlike his challenger, Eggington has a little form on his side with four straight wins — including a second-round TKO success in Tuscany over Orlando Fiordigiglio to claim the championship that will be on the line on Aug. 1.

"Italy was a great adventure for me," he said. "I went over there with a chip on my shoulder, knowing I needed to do it right and get back where I needed to be.

"When I heard about these back garden brawls, I got on the phone to Eddie and wanted to be involved ASAP. It’s a fight I can win and one I can look good in."

The champion also feels both he and his opponent's brushes with adversity between the ropes is what led to them being so eager to fast-track this mouth-watering showdown.

"I think a lot of people put a lot into a loss, said Eggington. "You can come back from one or you can pack it in and do something else.

"We’ve had good nights and bad nights but the defeats don’t define who I am. I’m getting better, I’m getting stronger. Training’s gone well and Saturday should be a good night."

Londoner Cheeseman is confident he has what is needed to take the title from Eggington and halt a three-fight winless streak that made his 2019 as frustrating as 2020 has been for almost the entire boxing community.

"What people don’t realise is I may be young — I’m 24 — but I’m maturing beyond my years. I’ve been working on a lot of things and making sure it’s all perfect. I’m a man now. Sam was a massive welter but he’s not as strong at light-middle.

"Everyone’s saying how fighting in the back garden will be weird. But for me it’s ideal. In lockdown, I’ve had no distractions. I’m usually running around like a lunatic in the run-up to a fight night, but I’m focused here. I’m very determined to get the win."

What this fight means to Hearn as he prepares to lead his Matchroom stable into the wilderness of his own back garden was evident as he wrapped up the presser.

"Thank you, both of you, for taking this fight," he told Eggington and Cheeseman. "It’s hard making fights like this with two people we care about, but this should be a cracking main event."