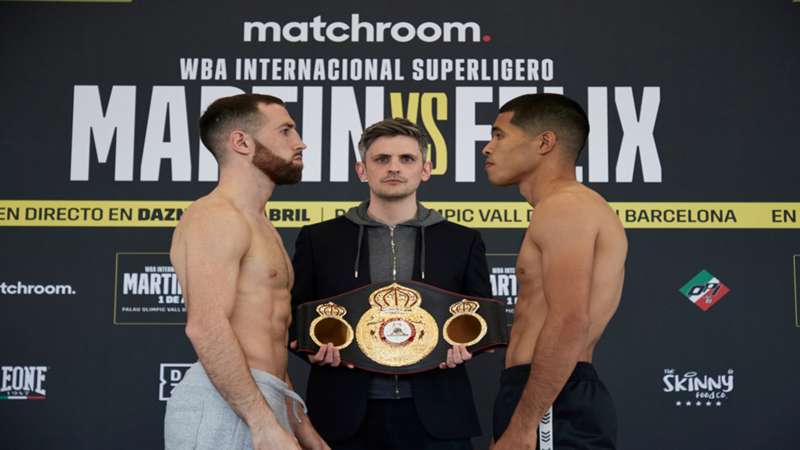 Sandor Martin returns for the first time since upsetting Mikey Garcia in October.

Heading into his 2022 debut on Friday against Jose Felix Jr., how would Sandor Martin perform coming off the biggest win of his career when he notched one of the biggest upsets in 2021, winning a decision over former four-division world champion Mikey Garcia?

Martin put on another stellar performance, using his superior boxing skills to win a lopsided decision (100-90, 100-90, 99-91) over Felix at Palau Olímpic Vall d'Hebron in Martin's hometown of Barcelona, Spain, which was live on DAZN across the world. DAZN News scored the fight 98-92 for Martin.

Throughout the fight, the name of the game was great footwork, quicker hands, and the patented right hook for Martin. He used his speed to get in and out of shots, which caused Felix to miss wildly on several occasions. Anytime Felix came forward, Martin would flick the right hook to keep Felix at bay. He set up the right hook with a crisp jab to the body which made Felix reluctant to come in as those were taking a toll on him as the fight wore.

Here is what happened at Sandor Martin vs. Jose Felix Jr.

facebook twitter whatsapp
Another right for Martin. Felix comes back with one of his own. A right sends Felix back to the ropes. Felix is popping jabs to the arm. A combination follows a right to the body from Martin as he fights to the bell. (10-9 Martin, 98-92 Martin)

facebook twitter whatsapp
Felix trying to find a way to the inside but Martin isn't letting him as he unloads a straight left and then another one. Give Felix credit, he's trying his hardest and giving it his all. Felix is landing but the shots don't have any pop. (10-9 Martin, 88-83 Martin)

facebook twitter whatsapp
Felix throws a lazy jab, and Martin unleashes a barrage to send Felix into the ropes but can't finish it off. A right hook stops Felix in his tracks. A left stuns Felix. Crisp right hand from Martin, who is cooking. (10-9 Martin, 78-74 Martin)

facebook twitter whatsapp
Straight left for Martin. Another right hook for the Spaniard. Another straight left pushes Felix back. Martin is forcing Felix to miss wildly. That's taking its toll on Felix as he begins to shake his arms. A three-punch combination for Martin. (10-9 Martin, 68-65 Martin)

facebook twitter whatsapp
A lovely straight left to the body from Martin. A good left for Martin, which changed the expression on Felix's face for a quick moment. A left by Felix but a crisp counter from Martin. Left to the body for Martin, who keeps finding a home for that. A one-two for Martin followed by a right hook. A left snapped Martin's head back. Straight left over the top for Martin. A right hook wobbles Felix for a moment. Martin has regained the momentum he temporarily lost. (10-9 Martin, 58-56 Martin)

facebook twitter whatsapp
Felix pushes back with a right-hand downstairs. A left lands for Martin. Felix comes back with a left to the body. Martin comes right back with the same shot. Good flurry from both guys, with Felix landing the cleaner shots. Felix needs to keep pressing. Good left hook from Felix. A flurry by Felix, but Martin backs him with a left at the bell. Best action round of the fight thus far. (10-9 Felix, 48-47 Martin)

facebook twitter whatsapp
Left-hand starts to find a home for Martin. Short right hook lands flush, much to the joy of the crowd. A one-two for Felix. Straight left lands for Martin at the bell. Martin is finding his rhythm. (10-9 Martin, 29-28 Martin)

facebook twitter whatsapp
Good left-hand lands for Martin. Combination connects for Felix. A left and then a right hook for Martin. Another right lands for the native of Spain. Martin is popping that jab at will. A right for Martin and looping left for Felix at the bell. Good action. (10-9 Martin, 19-19)

facebook twitter whatsapp
Not much in the first 90 seconds. A feeling out process. Combinations from both guys. Couple of left hands from Felix. Counter right lands for Martin. (10-9 Felix)

Can Martin continue his ascent after his win over Mikey Garcia?

A highly entertaining affair that saw both guys get dropped. Carmona went down in the eighth, and Cordova went down in the ninth. But Carmona put the bull in the horns with strong counter-punching, connecting on the cleaner shots to bring home a gritty victory in his home country to remain undefeated.

facebook twitter whatsapp
It is time for the co-main event as Joel Cordova (13-5-2, 3 KOs) squares off against Samuel Carmona (6-0, 4 KOs) in flyweight action.

I liked what I saw from Obregon. Yes, Lomotey hurt himself by getting two points deducted for fouls, but Obregon performed well.

He got off to a fast start and pushed the pace throughout. Lomotey had his moments, Obregon made a strong push and nearly sent Lomotey to the canvas with an array of power shots, but Lomotey survived.

Going the distance wasn't enough for Lomotey, as he suffered the first defeat of his career, and Obregon remains undefeated to run his record to 10-0.

Battle of the undefeated records

Jorgelina Guanini gets the decision win

A gritty performance from Guanini. She fought in the pocket and let the hands go for a good bulk of the contest to hand Levy the first loss of her professional career.

A compelling fight to kick off the main card. Bolotniks and Sep was nonstop action with both showing a ton of heart. But it came down to Bolotniks throwing the heavier shots, being just a bit more to gain the decision nod.

It should be a great card if we keep getting action like this.