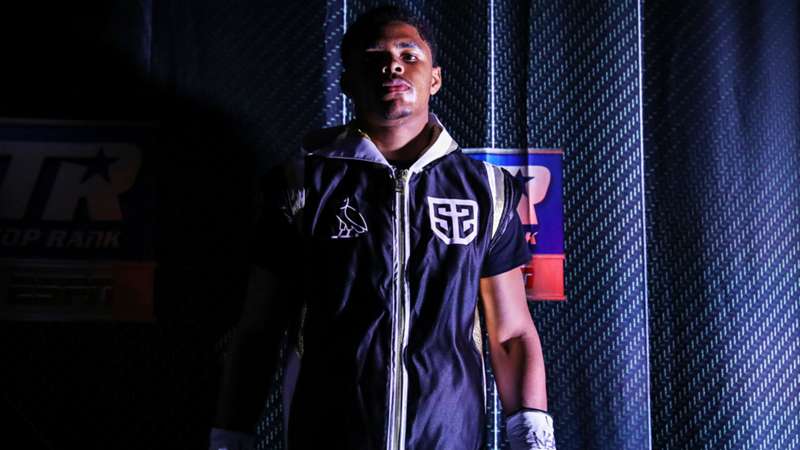 Exclusive: "I don’t know why Oscar Valdez should (only) get a slap on the wrist," says the WBO interim junior lightweight champion.

Last week’s news of Oscar Valdez being allowed to defend his WBC junior lightweight title against Robson Conceicao despite testing positive for phentermine, a stimulant banned by the Voluntary Anti-Doping Association, sparked instant reaction from the boxing community.

Devin Haney boldly asserted in a tweet that “Eddy Reynoso whole camp on that s—t,” accompanied with an emoji of a syringe.

Gervonta Davis tweeted: “Lol…so we using stimulants to enhance our performance now. Bet” to which Shakur Stevenson replied with a trio of laughing emojis.

But of course, this is no laughing matter.

When DAZN spoke with Stevenson on Monday night, the WBO interim junior lightweight champion who has called out Valdez before, blasted the Mexican fighter and wondered if the same set of questionable rules that essentially gave Valdez a pass would apply to him if he was in this situation.

“I don’t think they gave him any type of punishment,” added Stevenson, who will challenge for Jamel Herring’s WBO junior lightweight title October 23 in Atlanta. “They kind of gave him a slap on the wrist for something that’s like … that he shouldn’t be doing. This is boxing at the end of the day. Somebody could get hurt. At the end of the day, people are dying in the ring.

"I don’t know why Oscar Valdez should (only) get a slap on the wrist.”

"This is a dangerous sport"

The stinging criticism comes as a result of Valdez testing positive for phentermine from samples collected Aug. 13, yet still being allowed to defend his world championship less than a month later.

In a statement from the WBC last week, the governing body contended that it formed a panel of “scientific and nutrition experts to investigate, analyze and evaluate all the available facts and evidence, and to recommend to the WBC how to proceed in this particular case.”

Among its findings was that bookend samples collected on July 22 and Aug. 30 — around the positive result — tested negative. The WBC and Pascua Yaqui Athletic Commission, the local commission overseeing the Valdez-Conceicao bout in Tucson, Ariz., decided to allow the Sept. 10 fight to go on with the agreement that Valdez will be subject to a “substantial number of random antidoping tests in the next six months" among other mandates.

He will also be placed in probation status for one year in which “any whereabouts failure or adverse analytical finding during the probationary period will result in an indefinite suspension from all WBC activity, immediate suspension of recognition of any WBC privilege (championship or status) until the matter is resolved; and being shown as Not Available in WBC World ratings.”

In a statement through his own social media, Valdez voiced his compliance with the WBC’s mandates while proclaiming his innocence.

“I have never used banned substances to enhance my performance,” Valdez said in his statement. “I have never done it. I have been respectful of the anti-doping rules since I was an amateur, Olympian and now professional.”

He added: “I will happily comply with the stipulations set forth by the World Boxing Council, to collaborate in the programs, tests and other activities required of me.”

Stevenson joins many in believing that Valdez got away lightly for a serious offense.

“This is a dangerous sport,” Stevenson tacked on for good measure. “This isn’t the sport you should be cheating in. I feel like you should really get punished.