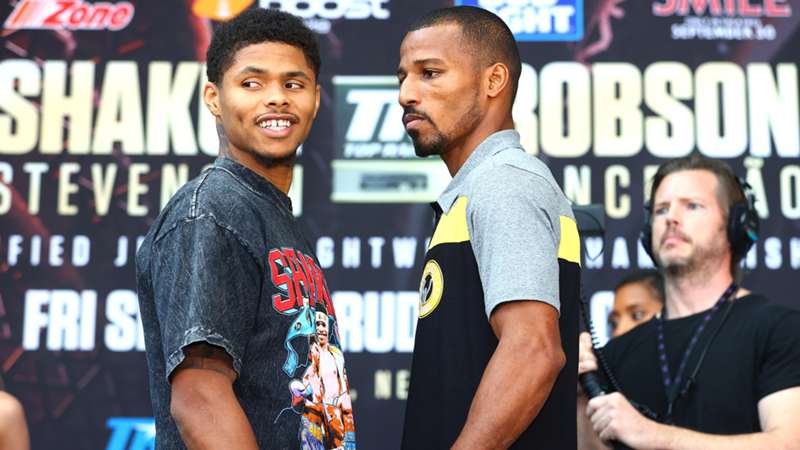 What the unified junior lightweight champion and game Brazilian contender must do to be successful Friday night in Newark, New Jersey.

It’s a homecoming fit for a king, as undefeated Shakur Stevenson looks to defend his unified junior lightweight titles against Robson Conceicao at the Prudential Center in Newark, New Jersey on Friday night.

Will the hometown product continue his boxing brilliance by producing yet another sweet science masterclass or will Conceicao play spoiler in what would be a mammoth upset?

After the two had a heated faceoff to cap Wednesday’s press conference, DAZN lists the keys to victory for both fighters.

Pressure, pressure, pressure. Conceicao must take Stevenson off his lead right foot and force him to backpedal. And the only way for Conceicao to do that is to pressure Stevenson and fight forward, firing combinations in the process. Knowing Stevenson’s defensive prowess, Conceicao is going to miss plenty of shots but if he could land some of significance they can go long ways against pushing back on the unified champion’s marksman ability.

Sully up the fight

Conceicao would be wise to attempt to sully up the fight to mar the surgical precision of Stevenson. The Brazilian boxer could do this by resorting to the clinch and punching within it and also using his taller frame to muscle Stevenson up against the ropes when and where possible. Of course, this is contingent on his ability to close the space against one of the best realtors in the fight game. Not an easy task but it’s up to Conceicao to force the issue and try to take the fight away from the middle of the ring where Stevenson is most in his comfort zone. There’s no doubt that this is going to be a tough task. Even when opponents have stalked and managed to get Stevenson off his block, watch how quickly he’s able to reset his feet and reestablish his stance and range.

Rely on footwork and speed

Listen, Conceicao’s head coach Luiz Dorea told Top Rank cameras that his charge’s “speed and footwork” will power his way to victory. Well, it’s a tall order to prove against a boxer as astute as Stevenson, but Conceicao has the stage to do so and it’s now or never. He should try to use his footwork and speed as much as possible to get close to Stevenson in attempt to land damaging shots.

The way Shakur Stevenson plants his lead right leg, flicks the jab and commands real estate is a thing of boxing beauty. He did this to near perfection back in April, asserting the jab from the opening round in what turned out to be a masterclass victory over a rugged Oscar Valdez to become the unified junior lightweight champion (of note is the fact that Conceicao counts his one pro loss to Valdez). There’s no doubt that the supremely sound Stevenson will look to assert the jab early against Conceicao as well, peppering him with combinations as often as possible. Once Stevenson gets into a rhythm with that right jab, the left-handed power punches will follow and it should be a long night ahead for Conceicao.

Do what he does best: hit and not get hit

Stevenson took the hit-and-not-get-hit mantra of Floyd Mayweather Jr. and put his own spin on it. As frustrating as it must be for opponents to get lit up with that jab, Stevenson provides more irksome moments the other way as he slips, rolls and eludes punches escaping damage. A few sequences like this and Conceicao might reconsider his aggressiveness, not to mention find himself outclassed.

Take knockout if it comes, don’t force it for the home crowd

Conceicao called Stevenson “very sneaky” during their intense faceoff following Wednesday’s press conference. And the Brazilian fighter is correct when it comes to Stevenson’s power, which is deceptive yet seemingly growing with each fight. If Stevenson’s pristine boxing skills soften Conceicao up enough, a knockout could be his for the taking. However, the key is for Stevenson to not force the KO to show out in front of his Newark, New Jersey crowd and instead take it if it presents itself during the natural flow of the fight. Seeing the 25-year-old box composed well beyond his years, this shouldn’t be an issue whatsoever.