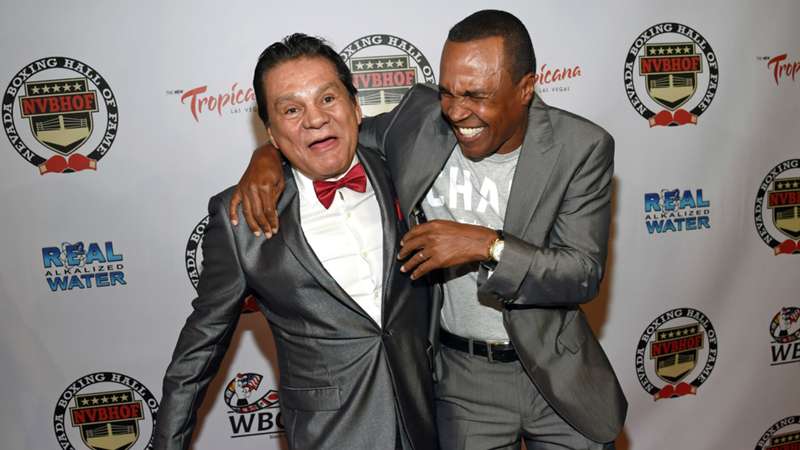 Sugar Ray Leonard reflects on his rivalry with Roberto Duran and says that he never heard his opponent utter those infamous words that have gone on to become a part of boxing lore.

When Sugar Ray Leonard and Roberto Duran met on Nov. 25, 1980, for an immediate rematch of their showdown that saw “Hands of Stone” give Leonard his first loss, few could have possibly anticipated what would take place at The Superdome in New Orleans.

After seven rounds of a superior display of boxing and an equally demoralizing level of taunting by Leonard, Duran infamously quit in the closing moments of Round 8 by turning his back on his opponent, allegedly saying “No mas.”

While the term remains a part of boxing lore, the one person who never heard Duran say "no mas" was Leonard himself.

Nevertheless, the fight has lived in infamy due to Duran quitting, and Leonard spoke about what is arguably his greatest victory on “Boxing with Chris Mannix.”

Leonard addressed his first meeting with Duran and how surprised he was by Duran’s power.

“I’ve never been hurt so much in my career,” Leonard revealed. “His fists felt like rocks. ... He hit me so hard so many times in so many places that I looked at him and said, ‘You know what? This is it.’ I contemplated in the ring that this would be my last fight.”

Duran would go on to win a unanimous decision and take Leonard’s WBC, The Ring and lineal welterweight titles. But Leonard urged his team to make an immediate rematch, and the return bout was set for Nov. 25, a mere 158 days after their first fight. And, as Leonard explains, the quick turnaround was by design to take advantage of Duran’s partying lifestyle.

“I knew that he hung out and partied quite a bit, like I did, but he gained so much weight, so I wanted the rematch ASAP,” Leonard said. Duran infamously blew up between fights, gaining as much as 40 pounds.

The rematch saw Leonard put on a scintillating display of speed and boxing ability as he frustrated Duran throughout the bout. With the fight in control, Leonard would begin taunting Duran, much to the chagrin of his opponent. But the crowd ate it up as the momentum continued to build for Leonard.

“I heard the crowd laughing,” Leonard said. “Then I looked at his face and he was puzzled. He didn’t know what the hell was going on. It really, really bothered him.”

With the fight seemingly in control heading into the eighth round, Leonard continued to pelt Duran with punches while mocking his opponent. After a brief clinch in the final 30 seconds of the round, Duran turned in disgust and waved his glove in Leonard’s direction. Some confusion ensued as referee Octavio Meyran urged the fighters to continue but Duran had seen enough, turned his back on Leonard and walked away. Meyran called a halt to the fight and the arena exploded as it was infamously billed as the “No Mas” fight.

“It was so bizarre,” Leonard said of what took place nearly 40 years ago. “It never came up in my mind. It was my brother Roger that kept saying ‘Ray, he’s quitting!’ But I never thought that would happen. That’s Disneyland.”

It has been debated for years whether Duran actually said, “No Mas.” Duran has said he never said the words and blamed commentator Howard Cosell for coming up with it. Outside of Meyran, the closest person who could have heard him was Leonard, who also said that he never heard the words come out of his opponent’s mouth.

“In all due respect to Roberto, I never heard him say ‘No mas,’” Leonard said. “He never said ‘No mas’ to me, but he told the referee ‘no more.’”

Leonard would go on to defeat Duran in a rubber match by unanimous decision in 1989. Although the two had a heated rivalry, they have since become close friends.