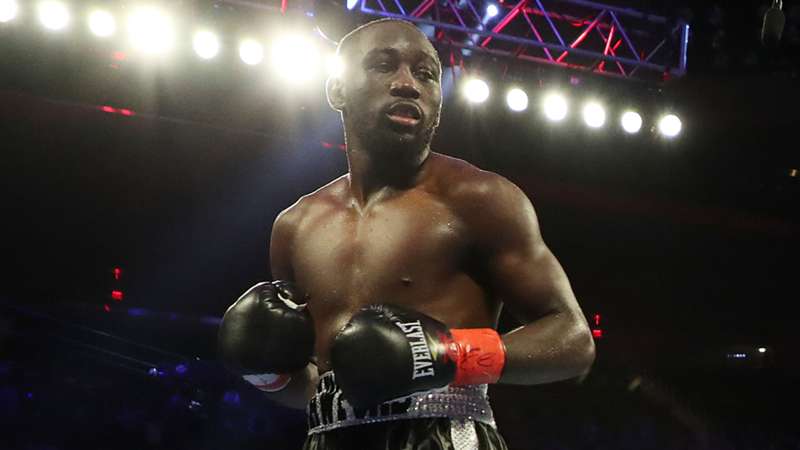 The WBO welterweight titleholder had to overcome a game test from mandatory challenger Egidijus Kavaliauskas on Saturday night.

NEW YORK — Terence Crawford made something perfectly clear after his fight against Egidijus Kavaliauskas on Saturday: He wasn’t knocked down in the third round.

“I was not hurt, I did not fall from a punch,” Crawford said shortly after delivering a ninth-round TKO of Kavaliauskas at Madison Square Garden. “As you see, as soon as I got back up, I stood right to him.”

Regardless of whether Crawford hit the mat because he slipped — which is what the referee ruled — or because of a stinging right hand and a left hook to the temple, something about the WBO welterweight champion tasting canvas seemed to enrage Crawford. Not Terence, but his cutthroat alter ego, “Bud."

Kavaliauskas was every bit of the advertised “Mean Machine,” forcing Crawford to get rougher and meaner. The 32-year-old native of Omaha, Neb., showed plenty of championship mettle in his fight.

In the seventh round, “Bud” split the mandatory challenger's guard with a piercing left uppercut before adding a left-right-left combination to the head. Crawford then ate a left-right combo just so he could dole out a long right hand, followed by a vicious overhand right that made the Lithuanian hit the deck.

In producing the pivotal round, Crawford also put the boxing world on notice about something:

“I showed that I could fight without just boxing,” Crawford said. “I could take a punch. I walked through a lot of his shots today and I made it a fight as well when he was trying to box.”

Two rounds later, Crawford’s switch-hitting brilliance was on full display. He lunged into throwing a left-right-left hook combo that drove Kavaliauskas back, before crouching, stepping back and measuring “Mean Machine” with a picture-perfect right uppercut that popped the challenger’s head up. All razor-sharp weaponry.

Kavaliauskas beat the count, but Crawford charged across the ring and dropped him again with another overhand right. It was over.

Earlier in the week, Crawford spoke with DAZN News and busted the proverbial “wrong side of the street” myth, saying no such thing exists between Top Rank and PBC, which hosts other elite welterweights such as Errol Spence Jr., Manny Pacquiao, Keith Thurman, Shawn Porter and Danny Garcia.

"You got to look at the fighters in his category that (Al) Haymon promotes — PBC — that (Crawford) would be interested in," Arum told DAZN News on Wednesday. "Errol Spence is on the shelf I don't know how long, but a considerable period. Pacquiao never wanted him. When Pacquiao was with me, he would never fight him.

"The fight that could be made that would be interesting is Crawford and (Shawn) Porter," he said. "Crawford and Danny Garcia does nothing for me. That's too easy of a fight, but Crawford and Porter is a good, good fight, and I'll be talking to Haymon about that as a possibility."

If 2020 is going to be the year Crawford faces any of the aforementioned PBC fighters, “Bud” at least showed them another layer of his fight game Saturday night. About where Crawford is willing to go.

They already knew he’s a three-division world champion and the arguable pound-for-pound best, whose switch-hitting is second to none. But Saturday night, he also showed he’s prepared to abandon his boxing brilliance altogether and flat-out fight, if need be. If that entails showing off a strong chin, “Bud” is game and capable of getting stronger — and meaner — as the fight goes on.

“I’m not ducking anyone on the PBC side or Top Rank platform,” Crawford said in the ring following his win. “I want to fight all the top guys.”