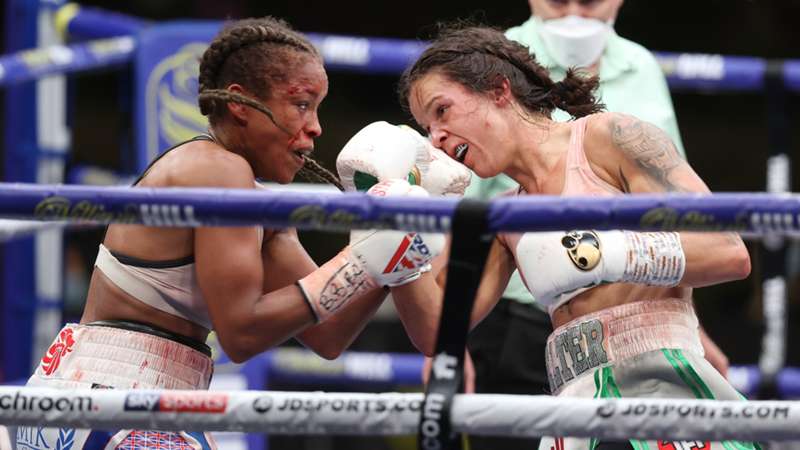 Matchroom Fight Camp delivers a second blistering main event in as many offerings as Terri Harper and Natasha Jonas make history at Mascalls.

The first ever women's world championship bout to be contested by two British fighters did not disappoint, six days after Ted Cheeseman and Sam Eggington also delivered the goods in promoter Eddie Hearn's back garden.

With the three judges' scorecards coming in at 96-94 Harper, 96-95 Jonas and 95-95, the title belts remain with 23-year-old Harper, who remains undefeated as a professional.

Underdog Jonas, 36, was bloodied early on by the champion, but fought back and surprised Harper with success on the inside.

Neither fighter could get a serious foothold in this see-saw contest, and many had them even with two rounds remaining.

While this fantastic advert for women's professional boxing split the judges, everyone appeared unanimous as far as what's next.

" A million per cent, I’d do that again", said Jonas as the two warriors stood side-by-side for the post-match interview.

Harper echoed Jonas' sentiments to do it all again.

She said: "I’ve always looked up to Tasha, and to think that I just shared the ring with her.

"I knew she’d be a tough opponent but I didn’t expect her to come out like that. I’m 23. No excuses, but I’ve got a lot to learn."

Hearn was grinning from ear-to-ear as he revealed that he also scored the contest at five rounds apiece.

"We have to see that fight again," he said.

"I know we have been talking about unifications with (WBO super-feather champ and new Matchroom signing Ewa) Brodnicka, but with Brodnicka likely to have to fight (mandatory challenger Mikaela) Meyer I think we have to give Jonas another shot.

"I had them even after eight, and I scored the ninth to Jonas and the final round to Harper."

On the undercard, Anthony Fowler overwhelmed Adam Harper to score a seventh-round TKO, Hopey Price made it three wins from three as a pro with a one-sided six-round decision over Jonny Phillips, and Chris Billam-Smith retained the Commonwealth cruiserweight crown with an explosive second-round stoppage of Nathan Thorley.

Anyone for a rematch? pic.twitter.com/gP1S41Yqti

Round 10: I could honestly understand any scorecard that has these two within two rounds of each other. Only two of these 10 rounds haven't been fantastic, compelling stuff. Harper got the edge in that last round, and it's five rounds apiece for me, but I could see Harper getting some champion's grace there. 10-9 Harper, 95-95.

Round 9: The challenger is really starting to control these cracking inside slugfests. Harper, having had no luck stepping back and likely knowing she needs to take these last two rounds to be sure of the judges' backing, engages her, but it's another round edged by Jonas. This is going to be tight on those scorecards. 10-9 Jonas, 86-85 Jonas.

Round 8: Jonas has Harper in trouble with a right upper, right hook and later, a plush straight left. Harper rallies with some strong lands in the final 30 seconds, but that was a huge round for the challenger. 10-9 Jonas, 76-76.

Round 7: Jonas is stringing some tidy combinations together. Harper seems to be stronger in the second of each two-minute block, and in this instance a big right is probably enough to reclaim the lead overall. 10-9 Harper, 67-66 Harper.

Round 6: The champ starts the round on the back foot, looking to step away from the heat a little and pull Jonas in. It backfires at first, as the challenger lands a couple of big lefts. Harper gets back in the thick of it, but that was another narrow Jonas round to bring us back to parity. 10-9 Jonas, 57-57.

Round 5: Harper goes to work on the inside as the round begins, but some choice body shots from the challenger create some distance. Another great round here, both women are opening up on each other. Harper finishes the stronger, however, and Jonas looks fatigued as she returns to her corner. 10-9 Harper, 48-47 Harper.

Round 4: The champion is starting to get her movement right, and is avoiding most of Jonas' best efforts. It isn't a patch on Round 3, but it's edged by Harper to bring us level after four. 10-9 Harper, 38-38.

Round 3: Jonas' cut is from a clean shot by the champion, according to the official. Great third found, but Harper is starting to connect with more consistency. Jonas' corner has to slow her down, reminding her this is a 10-round fight. 10-9 Harper, 29-28 Jonas.

Round 2: A lovely left from Jonas 30 seconds into the round is followed by a small flurry capped by a good right. It's been a very bright start from Jonas, though she's busted open early on from what the commentary team believe was a clash of heads. 10-9 Jonas, 20-18 Jonas.

Round 1: Very much a feeling-out process, but the pick of the clean lands belong to Jonas. Good stuff from the challenger to edge the first. 10-9 Jonas.

10:15 p.m.: Eddie Hearn wasn't lying when he said the ringwalks would be spectacular. Big feel to this, even without the crowd. Introductions are done, referee has given final instructions ... and there's the opening bell!

9:45 p.m.: It's after dark, and all that remains is the main event. History in the making between two British female boxers. Will it be young, unbeaten lion Terri Harper or older, Olympian lion Natasha Jonas who walks out of Eddie Hearn's back yard with the WBC and IBO super-featherweight straps?

Fowler with TKO victory over Harper

9:40 p.m.: And finally, mercifully, the referee steps in halfway through Round 7 to spare Harper from another relentless flurry of strikes. Fowler had to be very careful toward the end to avoid blowing a surefire win via DQ, but he kept his hands high and continues his soft reset of sorts under new trainer Shane McGuigan.

A dominant display from @afowler06 who stops a brave Adam Harper in round 7.

Fowler landed this knockdown in the fourth 👌💥 pic.twitter.com/TBFUINt3ff

9:35 p.m.: Six rounds done now, and somehow it isn't over yet. Fowler drops his opponent with a wicked body strike 35 seconds from the end of Round 4, but Harper answers the count and begs his corner for one more round — and once again at the end of the fifth. In Round 6, Fowler catches Harper low once again, and the referee warns Fowler he’ll throw this one out if it happens again. A disqualification is probably Harper’s only shot at a win here as it’s been all Fowler.

9:25 p.m.: We're three rounds in and it's all gone the way we expected so far, but even more of an emphatic and one-sided performance from Fowler. Razor-sharp from the opening bell, giving Harper no time to apply any pressure, it's been all Fowler. However, he was warned twice for low blows in the first, then once again in second to earn a one-point deduction. Not that it will likely matter in the long run. Harper was cut around his left eye in the second and has been blinking crimson out of his vision ever since.

9:00 p.m.: Chief support is next: Anthony Fowler and Adam Harper return to the ring in a 10-rounder. Fowler understandably heavily fancied to show his class here, but the sheer energy of both will hopefully produce fireworks along the way.

Price with points victory over Phillips

8:45 p.m.:  The perfect result for Price’s trainer Dave Coldwell as his prospect gets the maximum possible ring time en route to a comfortable victory. Phillips as expected attempted to roughneck Price from the very beginning. Price picked his spots at first, and the gap in class became increasingly apparent with each round. Referee Ian John-Lewis predictably scores it a sweep over the six rounds, 60-54.

8:10 p.m.: Bout No. 2 tonight is upon us, as Hopey Price looks to show us what he can do against Jonny Phillips, who will attempt to drag Price into deep waters for the first time in the pro ranks.

7:50 p.m.: Billam-Smith retains the Commonwealth cruiserweight title after two minutes and five seconds of Round 2. An electric sprint to kick us off here sees CBS overwhelm Thorley to end his unbeaten record after three knockdowns. The champ scored the first knockdown with a body shot and hook from a clinch after a great start in Round 1, before pounding Thorley into a second count early in the second. The challenger actually showed some promise after that with his back to the wall, only to walk into a stiff right for the third and ultimately final knockdown. His corner had towel in hand, but the official made the call for them. Cruiserweight may be a step too high for Thorley.

🔥💥 Huge right hand KO! 🔥💥 @ChrisBillam gets #FightCamp week 2 off to a thrilling start with this second round knockout of Nathan Thorley

7:40 p.m.: The set-up looks as pleasant as it did on Saturday for the Eggington-Cheeseman card . And our new curtain-raiser will be the Commonwealth cruiserweight championship showdown between titleholder Chris Billam-Smith and his challenger, Nathan Thorley.

7:35 p.m.: Promoter Eddie Hearn is already buzzing for this one, telling us during the broadcast introduction that he made the decision to add pyrotechnics to tonight's show. He was set to only wheel those out for last week's maiden Fight Camp and the big one on Aug. 22 headlined by Dillian Whyte and Alexander Povetkin. He says he has seen tonight's ringwalks rehearsed and we are in for something special.

7:30 p.m.: Hello and welcome to our live coverage of Matchroom Fight Camp 2! It's Harper-Jonas in our historic main event, but as you may or may not have read, the scheduled opener was cancelled on Thursday night as Aqib Fiaz (5-0, 0 KOs) was withdrawn from his fight with Kane Baker (13-6, 0 KOs) due to Fiaz feeling unwell after the weigh-in.