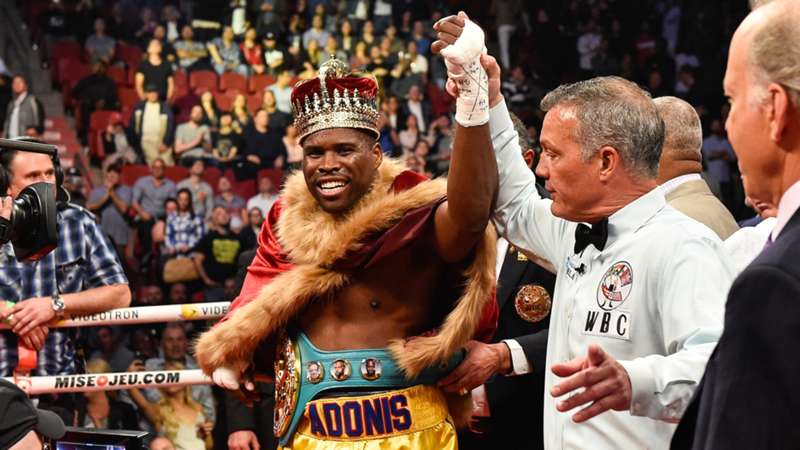 Adonis Stevenson came late to boxing and when he was at the top, an accident took away everything but hope.

At the age of 41, Adonis Stevenson had to relearn how to talk, how to feed himself and how to walk.

The Haitian-born fighter suffered a concussion in 2018 during the tenth defence of his WBC light heavyweight title and was induced into a coma for three harrowing weeks.

"I was champion and I died and now I'm back. I wasn't supposed to be alive. I was supposed to die and God gave me a chance, he gave me life. And now I have a job," Stevenson, who now walks without difficulty and after a lot of rehabilitation work managed to get his life back, told DAZN.

"When I had the concussion I couldn't eat, I couldn't talk, I was like a baby, I had to work a lot, with God, because when I was dead God told me I would recover, that my body would recover with time. I had to relearn how to talk, how to eat. I was a newborn child. I had to start everything.

"It's not a matter of luck (what happened to me) it's a God thing. Luck is a work of God. I worked very hard and God was with me. My mission now is to give hope, I can coach, I could coach someone, but giving hope is different, it's on another level. It doesn't matter if you play football or hockey, I will give you hope. I'm here to help everyone," said the fighter, who in conjunction with the WBC will give motivational talks to children and young people.

Stevenson was born in Port-au-Prince, Haiti, but his family immigrated to Canada in search of better opportunities. By the age of 14, Adonis was out of control and started getting into trouble with the law for his gang ties and five years later he was convicted of pimping.

In prison, however, he discovered what he was good at. One afternoon, while watching television, some of his fellow inmates asked him to change the channel. However, he refused and by the time the guards came in, at least 10 inmates were lying knocked out on the floor, while Stevenson turned his attention to the TV.

Upon his release in 2001 and at the age of 24, he vowed to change his life and dedicated himself to boxing. In 2006 he made his pro debut and in just one year he was crowned Canadian champion and it all cascaded from there, by 2013 he was world champion and unstoppable, knocking out Chad Dawson, Tavoris Cloud, Tony Bellew and Tommy Karency and Andrzej Fonfara, but then came a draw with Badou Jack and the loss to Olexandr Gvozdik and the injury that would keep him out of the ring.

"When you become world champion it's a dream come true, but when you become the champion of hope (like me) it's much more. Because as a champion I was dying, to be honest I was dying, now I woke up, I took my life - because God gave me this life - to give hope to everybody. God gave me life again, now I will follow God. I am the miracle man."

Now, four years later, Superman Stevenson has returned to the gyms and from time to time he can be seen hitting the bag, because he assures that despite what happened, he still loves boxing.

"It's my passion," Stevenson concluded.