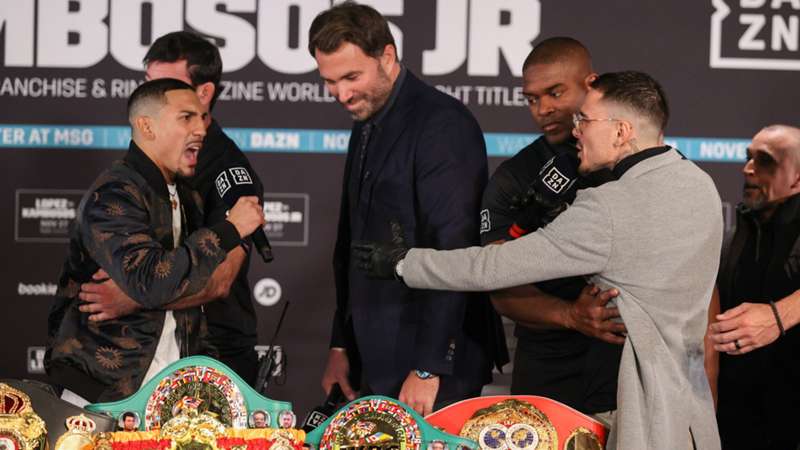 Watch this fight on DAZN (Except China)

Teofimo Lopez and George Kambosos Jr. are finally set to meet on Saturday night after a year of chaos and frustration.

Since beating Vasiliy Lomachenko in October last year to become the unified lightweight champion of the world, Teofimo Lopez was destined to become a boxing superstar.

However, his first fight since this career defining win has taken 13 months to make.

A clash with IBF mandatory George Kambosos Jr. should have been one which was relatively easy to arrange, but as any boxing fan knows, putting together world title fights is never a simple task.

First came a purse bid last February after Lopez and his promoter Top Rank failed to strike a deal. As expected, Top Rank and Eddie Hearn’s Matchroom made bids for the contest, but it was social media platform Triller which made headlines after blowing its two competitors out the water with a $6.018m bid.

Lead by Ryan Kavanaugh, Triller’s foray into boxing consisted of a number of fight nights involving YouTuber Jake Paul, but now the company wanted to make a statement to the rest of the sport.

Set originally for June 6th at Miami’s LoanDepot Park, both men were looking forward to career-high paydays in a what had the potential to be a very different looking boxing event.

However, this was when it began to unravel for all involved.

"Disrespect my family... I'm breaking your neck and I'm willing to do that" 😳

Watch the full Off the Cuff with Teofimo Lopez on DAZN 👉 https://t.co/9EZSAW7DLA pic.twitter.com/GeEC02LGTT

Triller decided to move the date to June 19th to avoid any clashes with a pay-per-view fight between former pound for pound great Floyd Mayweather Jr. and internet star Logan Paul.

Lopez then contracted COVID-19 in the week leading up to the fight which resulted in another postponement, this time for August 14th.

As the Summer months flew by, the chaos continued as rumours began to circulate that Triller planned to put Lopez vs. Kambosos Jr. on the undercard of a proposed fight between Oscar De La Hoya and Vitor Belfort on September 11th at the Staples Center in Los Angeles.

Triller eventually settled on a Monday night October 4th date at Madison Square Garden’s Hulu Theatre as they looked to avoid clashes with numerous sporting events, including an MLB wildcard game between heated rivals the New York Yankees and the Boston Red Sox which was set to take place the following day.

Then another sporting occasion, this time an NFL game, meant October 4th in Triller’s eyes wasn’t feasible. The social media platform believed grabbing the attention of a dedicated Hispanic fanbase was crucial in delivering huge viewing numbers and therefore didn’t want it to clash with a match between the Las Vegas Raiders and Los Angeles Chargers, two franchises with huge Hispanic fanbases.

At one stage, there were considerations about staging the fight in Kambosos’ home country of Australia in mid-October, but the country’s two-week quarantine rule for new arrivals made it impossible to make.

George Kambosos Jr. gets his shot at glory on Saturday night 👊#LopezKambososJr pic.twitter.com/TWpY2VL0nm

The confusion and uncertainty surrounding this fight continued with another date being thrown into the mix, this time October 16th at the Barclays Center in Brooklyn, New York. A date and venue which Kambosos Jr. didn’t approve of.

This proved to be the final straw for the IBF who stripped Triller of the rights to stage the fight, and instead awarded them to the second highest bidder, Matchroom.

Soon after this decision was made a date and venue was decided, November 27th at the Hulu Theatre.

The build up to this fight has been a frustrating for fans and the two fighters, especially when they have to get their weight down to 135lbs. This pent-up energy led to a fiery press conference between the pair a few days ago and who can blame them? They have been training for nine months for a fight date which they thought might never come.

Come Saturday night, Lopez an Kambosos Jr. will release all that anger and frustration under the bright lights of New York City, but will Lopez begin ‘the takeover’ which often he often preaches about, or will his Australian foe produce one of 2021’s biggest upsets and be crowned the new unified world lightweight champion?

Watch the full Lopez vs. Kambosos Jr. press conference below.