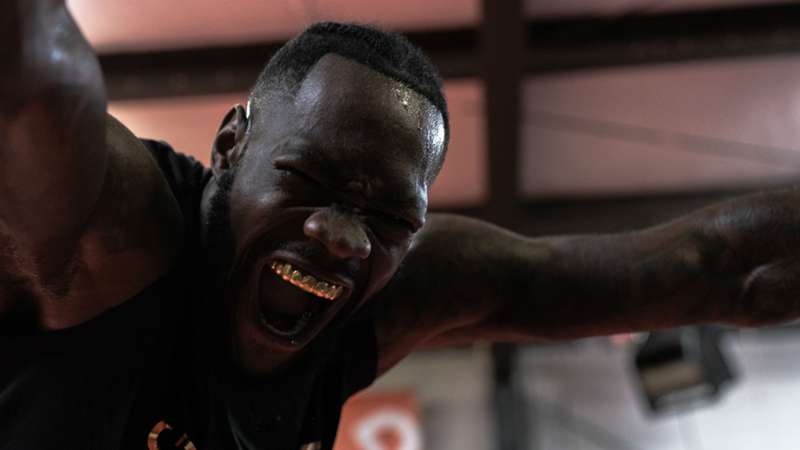 Three words have become bigger than any of Deontay Wilder's 40 knockouts. The WBC champion speaks on his new responsibility, using his platform for the greater good and how "Til This Day" has changed his life.

LAS VEGAS — They say actions speak louder than words. But, sometimes, words can be louder than any action.

Of all the noise that Deontay Wilder has made courtesy of his thunderous knockouts throughout his 11 years as a professional boxer, perhaps nothing reverberated more than his words last November when he barked the phrase “Til this day” to a reporter and struck internet gold.

It was just then when "The Bronze Bomber" realized that his voice was a tool that was just as effective, if not more, than his devastating punching power. And, if used for the greater good, could propel him further than simply having a pristine boxing record.

“When I said that it just unlocked something in people’s minds all over the world,” Wilder told DAZN in a recent sit-down interview days before he steps back into the ring to defend his WBC heavyweight title against Luis Ortiz. “No matter what country I go to people now go out of their way just to thank me for the role I have taken (speaking against social injustice) and not being afraid to use the platform that I have.”

Wilder sits in a chair with his legs crossed wearing a coat with no shirt underneath. A diamond-studded pendant rests on his bare chest. Above it, a necklace that resembles the one T’Challa wore in Black Panther reflects the light from the VIP room inside of the MGM. You can’t see his eyes behind his shades, but you can feel him maintaining eye contact while conversing.

It’s not just his towering 6-7 frame that is imposing, it’s his aura and energy once he enters a room. For just over a decade, Wilder has obliterated just about every opponent placed in front of him. Outside of Tyson Fury, none have been able to withstand his explosive power. But it took him a while to become the star that he should have been several years ago.

And all it took was him speaking his truth.

Wilder isn’t always particularly articulate, but he’s passionate about what he believes in. That passion, coupled with a sensitive subject like social justice, has made him a beacon of light in a sport that has seen few fighters address social issues with their platform.

“For some people, success turns into a bad thing,” Wilder explains without pointing any fingers. “Some people can be selfish. But I’ve gained a lot from my success in the boxing ring and you can only have so much money. Why not help the next person? My success has allowed me to see a lot of things and put me in a position to do a lot more.”

There’s an acknowledgment from Wilder that becoming a champion is far more than what happens inside of the boxing ring. There are plenty of undefeated fighters in the world, but few are recognized by the masses. It takes just a little bit more to separate yourself from the pack, and Wilder found that out by simply blurting out what he felt was right.

It all happened during a press conference last November ahead of his heavyweight title clash with Tyson Fury when Wilder addressed racial inequality.

“I cannot even watch the news — do we deserve it? What have we done to people?” Wilder asked after he press conference. “People see (racism) every day, but are blind to it. It’s still going on today and people say, 'Why are they so mad?' If it happened to you or your culture then you would understand, but people stick to their own naive way."

When an African American reporter referred back to his statement and questioned what he meant when he said that black people in American had been fighting for 400 years, it drew the ire of Wilder.

The moment spun into a meme and Wilder’s stature grew beyond just being the heavyweight champion of the world. He became a voice of the community, and it’s a badge of honor he is willing to accept.

“You just never know what someone is going through how they feel about something,” Wilder recalls of that moment and how it went viral. “When you hear words like that dealing with the history of black people in America and how we are treated, it hits home because a lot of black families deal with these situations today.

“We have to worry about so much more than just living. We have to train our kids on how to deal with the police. That’s not right.”

Social justice talk aside, Wilder also realized that his bombastic personality is one that sets him apart from his boxing peers. Whether it is him shouting “Bomb Squad!” or making headlines with sayings like “You have to be perfect for 12 rounds, all I need is two seconds,” the 34-year-old is becoming a fixture in pop culture.

But he still has to win, or all of this becomes irrelevant.

This leads us to when he faces Luis Ortiz in a return bout from March 2018 where Ortiz had Wilder badly hurt before "The Bronze Bomber" roared back and finished his Cuban counterpart in the 10th round. It was the first time we had seen Wilder in that kind of trouble. One would think that he would avoid putting himself in that kind of danger — especially when he has a rematch set with Tyson Fury for early 2020.

A loss to Ortiz would derail everything. But taking the biggest challenges available is part of what makes Wilder an attraction.

“I’m defending my title and legacy while also shutting up the naysayers,” Wilder says regarding the rematch with Ortiz. “I was told all my life what I couldn’t or shouldn’t do. I’m going to let my actions speak for themselves.”

Wilder takes exception to his skeptics calling Ortiz an old man and suggesting that he gains nothing by defeating a guy who he already beat a year ago.

“You can’t criticize his age or the opponents he fought because none of the top heavyweights are willing to step in the ring and fight that man,” he says. “These guys get on my nerves and it makes me sick.”

Wilder admits that he shares a kinship with Ortiz due to their respective situations as fathers who have children with disabilities. Wilder’s daughter Naieya was born with spina bifida, a condition where a fetus’ developing backbone does not close all way and leaves the spinal cord exposed, while Ortiz’s daughter has a rare skin condition called epidermolysis bullosa, which causes the skin to be very fragile and blister easily.

Because he understands the challenge of a father looking for a cure, Wilder believes that it was his duty to “bless” Ortiz with another opportunity and a huge payday.

“He’s one of the top guys that I respect in the sport of boxing,” Wilder says. “He defected from Cuba, was kidnapped, brought his family to America and he’s fighting to survive and take care of his family.

“I can relate to his situation. I know how those medical bills look and what it’s like to have a daughter who can’t do certain things. I had to bless him with this opportunity. I want to see him win, ultimately. I don’t want him to win against me, but in life I want him to be a winner.”

Whether he realizes it or not, Deontay Wilder has transformed right in front of our very eyes. He’s no longer simply a fighting machine. He’s become a three-dimensional character who is an advocate for social justice, a loving father with a magnetic personality and a fighter who cares for others.

Oh yeah, and he’ll knock your head off inside of a boxing ring.