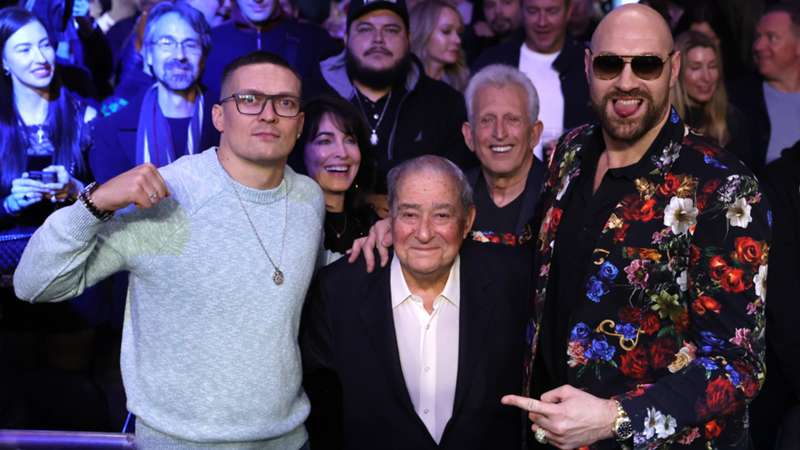 The former cruiserweight world champion made his prediction for a hypothetical undisputed world heavyweight title fight on The DAZN Boxing Show.

With an undisputed world heavyweight title fight between Tyson Fury and Oleksandr Usyk potentially in the works, the hypothetical scenario has many fans and former fighters thinking about who would come out on top.

While the former WBC cruiserweight champion Tony Bellew has plenty of admiration for the man who defeated him in the Brit's final fight before retiring, he believes it will be a difficult task if the Ukrainian shares the ring with Fury.

"I speak to Oleksandr, and I have nothing but admiration and respect for him," Bellew told Ade Oladipo on the latest episode of The DAZN Boxing Show.

"I wish he’d just walk away after facing AJ, have the rematch, be honourable to your word.

When it came to discussing the matchup with Fury specifically, Bellew cited the WBC champion's size as a major and potential decisive factor in the fight.

"Size is a huge thing, especially when you are as good as Fury. It’s not just being as good as Fury, it’s the fact that he knows how to utilise that size, weight, and strength advantage. He understands it, he knows the game.

"People will say heavyweights usually tire, Fury goes down, he gets up, he’s never tired, and the reason why he’s never tired is because he’s so relaxed, he’s at home when he’s in a boxing ring."

Bellew then went onto say: "That is an amazing asset and tool to have, he deserves all the praise in the world for the way he’s come back. That last fight with Deontay Wilder was something out of a fairy tale, it really was, against Usyk it would be a horrendous fight to watch.

"For me, it’s virtually mission impossible for Oleksandr Usyk."