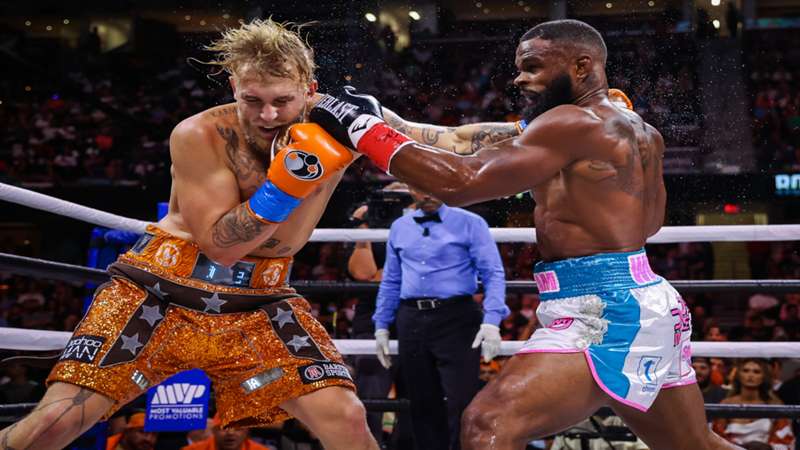 CLEVELAND — Tyron Woodley entered a new domain on Sunday evening when he made his professional boxing debut against Jake Paul.

Woodley was a sizable underdog heading into Paul's home state of Ohio, but he nearly pulled off the upset, losing via split decision. Woodley landed the hardest shot of the fight when he almost sent Paul through the ropes in the fourth round. Because of that and some other factors, the former UFC welterweight felt he did enough to walk out the victor.

"I feel like I won that fight," Woodley said in his post-fight press conference, which included DAZN News. "I feel like I landed the power shots. I feel like even when he landed a shot, I f—ing brushed it off, and I cracked him. I was in his face. I was in his s—. His back was against the ropes the entire time. I walked him down. I could have been a little more assertive. I was being patient. I was sitting on my shots. He got an overhand right. He threw a lot and missed a lot. I blocked a lot (of Paul's punches). I feel great in my conditioning. I felt f—ing amazing cardio-wise. My body felt good even when he landed a hard shot.

"I felt like I had him. One time I almost knocked him through the ropes."

During his in-ring interview, Woodley demanded a rematch considering one judge scored the fight his way. At first, Paul was a bit reluctant but said if Woodley got a tattoo that was initially agreed upon leading up to the fight, then a sequel would occur. Woodley said he'd get the tattoo, but in a place, no one would see it.

“It’s done. We’re doing the rematch,” Woodley said. “I have to get that win. It was too close. This is a movie, ain’t nobody going to push the needle like me and him did. We sold the s— out of this pay-per-view. I think everyone was excited about it. He was tough. He was fatigued in the fight, and he found a way to keep pushing through. I can never knock him for that, but we have to run it back.”