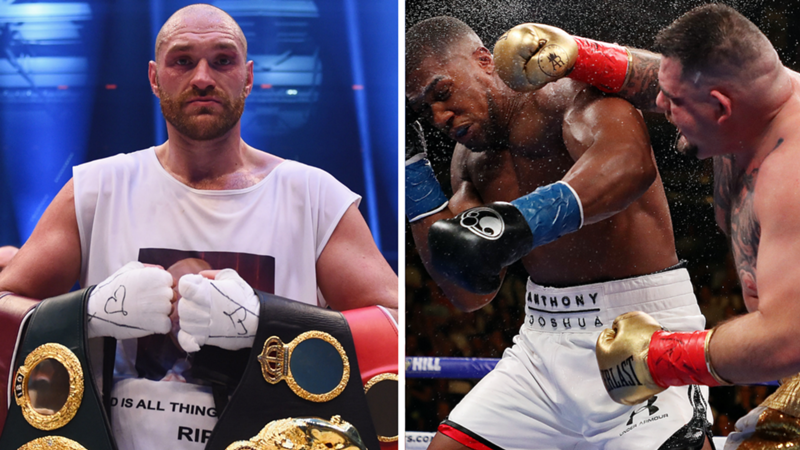 Tyson Fury says not only did he predict that Andy Ruiz Jr. would knock out Anthony Joshua in their June 1 fight, but that the newly crowned unified world heavyweight champion will do it again in December.

While speaking with DAZN’s Ak & Barak during a recent sitdown interview, Fury said he spotted a major red flag while watching Joshua enter the ring at Madison Square Garden that night.

“I seen him walk into the ring, and he had no sweat on him,” Fury said. “And it’s an old cliché in boxing that you got to warm up — it’s called ‘being caught cold.’”

The lineal heavyweight champion knew what would come next.

Fury was right, as Ruiz proceeded to get up off the canvas from a knockdown to knock Joshua down four times en route to a seventh-round TKO, becoming the first Mexican heavyweight champion of the world.

“It was a factor of he just did not want to be there on the night,” Fury added.

When asked for his thoughts about the Ruiz-Joshua rematch Dec. 7 in Saudi Arabia, Fury didn’t hesitate to say: “Exactly the same … even with his mind straight.

“His mind wasn’t the problem,” Fury continued explaining about Joshua. “The problem was, he met his bogeyman in Andy Ruiz Jr. The thing is with AJ, he can’t change his style. He’s brute force, great at what he does, he’s powerful, he’s strong, he’s got good boxing IQ in there, but he can’t come out on his toes, he ain’t gonna come out like Muhammad Ali, flicking the jab and moving around because he knows one style — that’s that classic walking forward, typical European style.

“And he’s looking to lift heavy weights in the gym and transfer that into a boxing fight,” he added. “This is not possible.”

Furthermore, the "Gypsy King" is predicting that Ruiz wins via knockout again because he didn't defeat Joshua with a lucky punch, as he evoked Hasim Rahman’s KO of Lennox Lewis in April 2001, only for Lewis to punish him later that year to take back his heavyweight titles.

“This guy (Ruiz) was giving him a beatdown,” Fury said. “Ruiz has quicker hands with him."

Selfishly speaking, Fury said that he’d like Joshua to win the rematch because that would make for a bigger fight prospect for himself. But when it comes down to it, he sees history repeating itself.

“I just see the same thing again,” he added, “not unless he (Joshua) can catch him early.”

Fury's comments were part of an interview with Ak & Barak on Sweet Scientists, in which Fury also talked about a number of topics, including his battle against depression and how his father didn't want him to fight Deontay Wilder. You can watch the first part of the interview below; Part 2 is available on  DAZN.