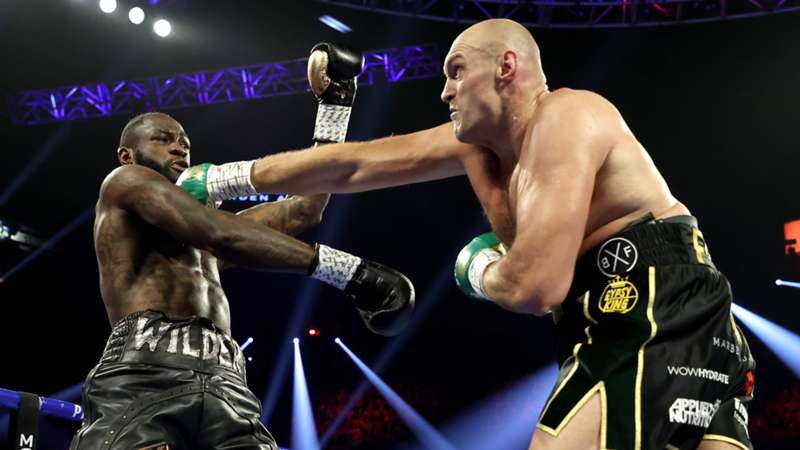 Tyson Fury and Deontay Wilder settle the score once and for all.

The battle for the WBC heavyweight championship will be decided on Saturday as Tyson Fury and Deontay Wilder meet for the third and perhaps final time at T-Mobile Arena in Las Vegas. It's been a long, winding road to get to this point.

The trilogy had been set to occur last summer, but Wilder was recovering from an injury. So it got shifted to December. But due to the COVID-19 global pandemic, which wouldn't allow a capacity crowd, the bout was postponed again. Irritated the fight was happening, Fury tried to make a bout with then-unified champion Anthony Joshua. A two-fight deal looked to be agreed upon with Fury saying as such, despite Wilder going to arbitration to invoke the clause in the contract for the third fight to happen.

The 2008 Olympic bronze medalist got what he was looking for as the arbitrator ruled in favor of Team Wilder, and the trilogy would have to happen, and the Joshua contests were on the backburner.

Fury-Wilder 3 was set to happen on July 24. But a couple of weeks before the fight, Fury came down with COVID-19 for the second time, and it was pushed back again, this time to this weekend.

“I’m going to knock Deontay Wilder spark out, and it’s going to be even quicker than our last fight,” Fury said in a press release. “If he couldn’t beat me after three years out of the ring and 10 stone weight loss, he’s never beating me. None of them will. They’re just hyped-up bums. All of them. Wilder, Joshua, Usyk. They’re all bums. Compared to me, they’re no good.”

Fury and Wilder locked horns for the first time in December 2018. The Englishman won the boxing aspect of the contest, but the "Bronze Bomber" exemplified why he's got the most dangerous hands in boxing, sending Fury crashing down twice, including the 12th round where it appeared Fury was out for the count. However, Fury rose from the dead to make it back to his feet and the final bell and secure a split draw.

After Fury and Wilder took interim bouts, they clashed again in February 2020. But, unlike the first go around, Fury took the fight to Wilder and battered the bully in the process. Fury dropped Wilder twice to notch a seventh-round TKO win after the American's co-trainer at the time, Mark Breland, threw in the towel.

The excuses started pouring out from Wilder in lieu of suffering the first defeat of his career and losing the WBC belt. He felt Breland shouldn't have thrown the towel into the ring, his ring outfit was too heavy, Fury's gloves being loaded to his water being spiked.

“Hopefully, Fury is confident enough to go through with this fight because I’m going to be a reinvented Deontay Wilder on October 9,” Wilder said. “This training camp has rejuvenated me. It’s refreshed me. The key to victory in this fight is having a violent mind but approaching it with calmness. I have all the right people around me, and we’re looking forward to October 9. I just hope Fury is ready to put on a show for the fans and make history once again.”

Will Fury have a repeat performance of what happened nearly 20 months ago? Or is a fresh set of trainers the recipe Wilder needed to get him back on track?

Here is everything you need to know about Tyson Fury vs. Deontay Wilder 3.

The event takes place on Oct. 9. Fury and Wilder are expected to make their ringwalks around 11:30 p.m. ET (4:30 a.m. BST). But those depend on the length on the undercard fights.

The fight can be seen be streamed on ESPN + PPV in the U.S. and on Fox Sports PPV through your local cable and satelitte provider. In the United Kingdom, it can be on BT Sport Box Office.

In Germany, Austria and Switzerland, Fury vs. Wilder 3 can be streamed on DAZN.

Where is Fury vs. Wilder 3 taking place?

The fight will be held at the T-Mobile Arena in Las Vegas. Fury last fought there in 2019 when he decisioned Otto Wallin; Wilder will be fighting in the building for the first time — though he has competed in Las Vegas multiple times in the past, including the loss to Fury last time out.