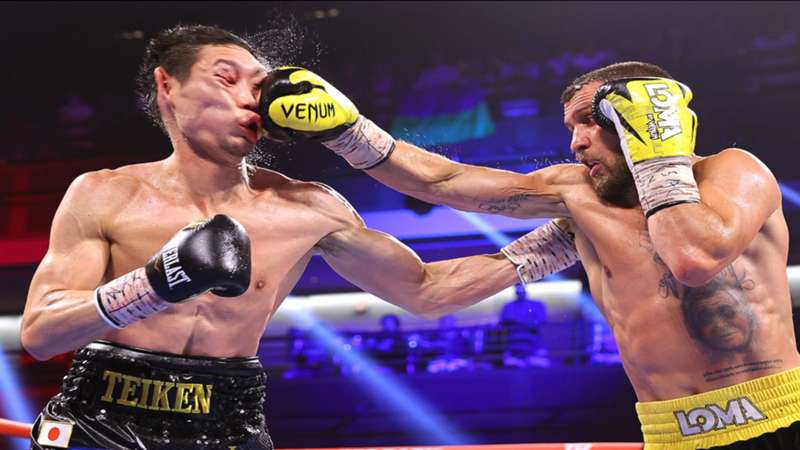 Lomachenko then had some stinging words for reigning unified lightweight champion Teofimo Lopez.

How would Vasiliy Lomachenko perform in his first fight back since losing his unified lightweight world titles to Teofimo Lopez?

Well, he looked like the Loma of old, as he sent Masayoshi Nakatani to the canvas twice to win via TKO at the 1:48 mark of the ninth round at the Virgin Hotels Las Vegas in Las Vegas, Nevada on Saturday night. DAZN News had the fight scored 79-72 for Lomachenko at the time of the stoppage.

Destruction all the way up until an incredibly convincing stoppage. 🤯

"I’m back and on track," Lomachenko said in his post-fight interview.

Smelling blood like a shark in the water, Lomachenko started targeting Nakatani's eye with one power shot after another. A straight left from Lomachenko made Nakatani hold on for dear life. Lomachenko looked to close the show and did just that as a left hook stunned Nakatani and one more left for good measure sent the Japanese fighter to a knee, before the fight was stopped.

Instead of taking his time as he did against Lopez in October, the former three-division champion came out firing on all cylinders and pressured Nakatani from the opening bell. He used his world-class footwork to open the angles to blast Nakatani with one left hand after another.

The punishment was starting to take its toll on Nakatani. At the end of the fifth round, Lomachenko landed another left, and Nakatani tried to back up, and Lomachenko blasted a right hand to send Nakatani down for the first time in the fight.

So, what's next for Lomachenko? The father of Teofimo Lopez was at the fight and told ESPN that his son would fight Lomachenko next, but it would have to be immediately after his fight with George Kambosos Jr. That fight is currently scheduled for Aug. 14. Lomachenko said he'll be ready.

"He has a fight in the future with Kamabosos," Lomachenko said. "December, January, February. I’m waiting."

CONFIRMED: Everyone wants it.

facebook twitter whatsapp
A left hurts Nakatani. He's looking to survive. A straight left from Lomachenko. Nakatani is holding on for dear life. Lomachenko is looking to close the show. Double left staggers Nakatani. A left hook stuns Nakatani. One more left sends Nakatani to a knee and the fight is stopped.

facebook twitter whatsapp
Nakatani is content on looking at Lomachenko, who doesn't mind and blasts a left hand. A combination from Lomachenko. That seems to wake up Nakatani, who lands a left uppercut. A flush left hand from Lomachenko.

Lomachenko lands another left and Nakatani is backs up. Lomachenko blasts a right hand to send Nakatani down with little time remaining. Nakatani survives the round. Could it be the beginning of the end? (10-8 Lomachenko, 49-45 Lomachenko)

facebook twitter whatsapp
Nakatani has only landed 10 percent of his punches thrown. He could thank Loma's footwork for that. Just as that's said, Nakatani lands a strong right hand, but Loma making his opponent miss some more. Holding from Nakatani, as he's a bit confused. But he continues to try to work the body and is having some success this round. (10-9 Nakatani, 39-37 Lomachenko)

facebook twitter whatsapp
Lomachenko enters the round with a 13-3 power punch connection advantage over Nakatani. Loma dances his way in and Nakatani clips him with an uppercut. Lomachenko peppers him back with a left. The former world champ gives chase and lands a quick three-punch combination. Loma deposits a stiff left hand to the body. Loma gives chase again and doubles up with a left jab. Nakatani falls, but it's ruled a slip. Nakatani did get some shots in to the body this round, but not enough to take the frame. (10-9 Lomachenko, 30-27 Lomachenko)

facebook twitter whatsapp
Lomachenko uses excellent head movement to get inside and land a left. A combination follows. He's changing levels on Nakatani and keeping the Japanese fighter off balance. Nakatani stalking Loma, but coming up empty. He needs to assert his size on the smaller Lomachenko. Short right hand from Loma lands. (10-9 Lomachenko, 20-18 Lomachenko)

facebook twitter whatsapp
Nakatani already trying to assert that long reach with his jab. Lomachenko is going to need to get inside of that reach. He gets inside and connects on a straight left. Another left follows moments later. Clash of heads. Ref doesn't step in and Loma peppers Nakatani. Loma sporting a gash on his forehead due to that clash of heads. Nakatani sees the blood and is becoming more aggressive. (10-9 Lomachenko)

facebook twitter whatsapp
Loma begins his quest back to trying to regain the unified lightweight titles, as he's moments away from stepping into the ring with a solid Japanese fighter.

Brant's corner stops it after the eighth round

Smart move, as Brant was just taking too much abuse this fight. Way too many unanswered left hands that split Brant's guard. This was a surgical beating delivered by Alimkhanuly. He was accurate and forceful, doing what he wanted, when he wanted to the former world champion. Impressive dominant showing from Alimkhanuly, who gets the dominant stoppage win.

Just like that, Alimkhanuly goes from prospect to contender in the division.

After 8 dominant rounds, the fight is stopped, and the Middleweight division officially has a VERY dangerous contender on the map.#LomaNakatani | LIVE on ESPN+ pic.twitter.com/OB0vS6xWwv

facebook twitter whatsapp
Alimkhanuly registers a knockdown early in the round with a left, which has found a home all fight long. Brant takes a knee and gingerly gets up only to take more punishment. Alimkhanuly is literally landing a left hand at will. He has controlled and dominated every round of this fight. At the end of the round, Brant's corner tells him that he's about to stop the fight, as Brant isn't throwing anything back the other way. Let's see if that revs Brant up.

Alimkhanuly in control through three

facebook twitter whatsapp
Alimkhanuly has landed 18 power punches to Brant's one through three rounds. The third also had Alimkhanuly throw a range-finding right, which missed but set up a straight left that connected. If Alimkhanuly lands more lefts with bad intentions like that, Brant is going to be in trouble. Brant is just giving Alimkhanuly too much respect.

facebook twitter whatsapp
Chances are Brant is pulling his punches in this opening round because he has already felt Alimkhanuly's punching power ... and respects it.

Co-main kicks this card off

Janibek Alimkhanuly vs. Rob Brant in a pivotal middleweight clash is seconds away.

Welcome to live coverage of Lomachenko vs. Nakatani

facebook twitter whatsapp
Keep it parked here for all live updates, results and highlights from Loma vs. Nakatani.