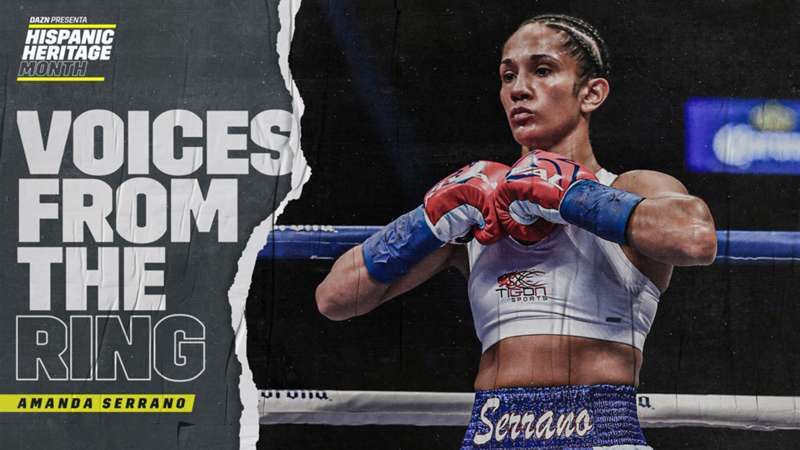 (Getty Images)
At 30 years old, Amanda Serrano has already carved her name in boxing history as the only woman to be a seven-division world champion.

“The Real Deal” has represented her Puerto Rican heritage front and center with each accomplishment. She was named the “Athlete of the Year” by the 62nd Annual National Puerto Rican Day Parade Committee in New York City earlier this year and was honored at the Newark (N.J.) Puerto Rican Day Parade on Sept. 15 — two days after beating Heather Hardy to become the WBO world female featherweight champion.

As part of DAZN's series of Voices from the Ring during Hispanic Heritage Month, which runs from Sept. 15 to Oct. 15, Serrano describes what being Puerto Rican means to her, how her heritage played a big role growing up in Brooklyn, and Puerto Rico’s rich history in boxing.

‘MY ISLAND MEANS EVERYTHING’

I’m truly, truly proud to be a Puerto Rican. It means everything. Those colors, that flag, my island mean everything. I go into that ring, knowing that I have to give it my all, so I can make my island proud. And just to be a Latina, I work so much harder because we don’t get the opportunities that other people get.

I was born in Carolina, Puerto Rico, but raised in Bushwick, Brooklyn, since I was a baby. In my house, there was always salsa playing every weekend when my mom had to clean. The smell of arroz con gandules y pollo — that’s rice and peas together with chicken if you don’t know Spanish — and pernil, which is pork. Always the smell of Sazón.

We never really had a big boxing family. The only fight we had a party for while I was growing up was when Oscar De La Hoya fought Felix “Tito” Trinidad. My parents had it playing on the TV in my house, and I just remember a whole bunch of people coming over. Me, personally, I wasn’t even watching the fight. I wasn’t even inside. I was too young. I was probably 9 or 10 years old. I was outside playing with my friends.

I just remember the big news that “Tito” won — a Puerto Rican won. At that time, I didn’t understand how big the boxing world is and how big the rivalry between Puerto Ricans and Mexicans was. But now, looking back at it — that was probably one of the greatest moments of Puerto Rican boxing.

Puerto Rico, we’re such a small island, but we’ve come out with great champions. We have over 75 champions, and each of them is better than the next one. Miguel Cotto. Wilfred Benitez was the youngest world champion in boxing history. We had the first Latin heavyweight world champion, John Ruiz.

My Puerto Rico is in need of a World Champion. It’s my Time to Step Up & Get It!

— As told to Mark Lelinwalla