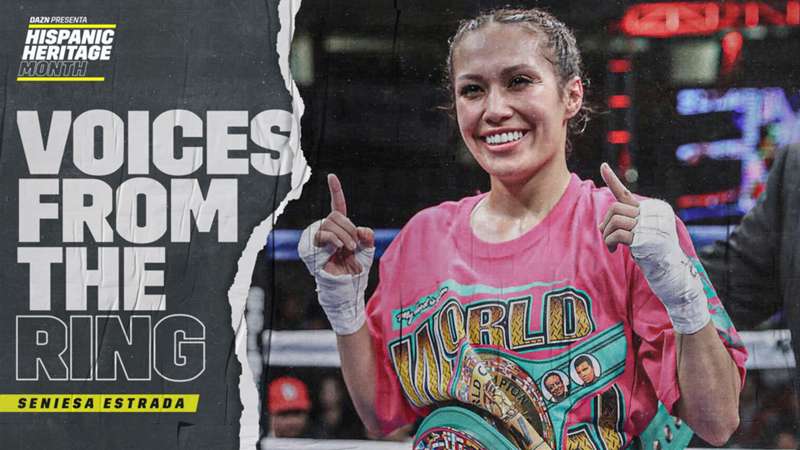 Seniesa "Superbad" Estrada first got in the ring when she convinced her dad, who's still her coach, to let her start boxing at 8 years old. During her youth she was a Police Athletic League champion, Silver Gloves champ and captured the Women's Golden Gloves championship. As a professional, the 27-year-old Estrada is 17-0 and is the current WBC Silver Female Jr. Flyweight titleholder. She also was the first woman to headline a Golden Boy Promotions event, when she defeated Sonia Osorio by unanimous decision in March last year.

As part of DAZN's series of Voices from the Ring during Hispanic Heritage Month, which runs from Sept. 15 to Oct. 15, Estrada describes what her Mexican heritage means to her, how growing up in East Los Angeles made her the person she is today, and the significance of being a successful female Mexican-American boxer.

'Being a successful Mexican-American female is a huge deal'

Hispanic Heritage Month means so much. It’s about how I grew up and where I grew up, the background I come from — just being able to express my culture through boxing is a huge deal. I’m very proud to be Mexican-American and representing my heritage. Boxing is a way to express and show who we are as fighters and as people.

Being a Mexican-American growing up in East LA has made the person I am today. Growing up in East LA, I was always around a lot of drugs, gangs and violence. For a lot of kids in the community, it was hard to stay focused. Being a Mexican-American and making it in the career I chose is very gratifying and something to be extremely proud of. I had a lot of friends who had so much talent and potential, but they chose other routes such as gangs and drugs.

Before I started boxing, my dad was in and out of prison because he was addicted to drugs and alcohol. That’s all he did and knew how to live. Of course, my mom was also around that as well. To have parents that experienced that and wanting more for me to make sure I didn't become another casualty from East LA — that's probably the reason I’ve been so focused and disciplined, because of them.

Being Mexican is a huge tradition, especially in boxing. Being Mexican means you have that huge support from the Mexican fan base and the whole country of Mexico and the Mexican-Americans who live in the United States. I take more pride and heart to fight with because the Mexican fans want to see great fights.

As a Mexican-American coming from East LA and the neighborhood I grew up in, being a successful Mexican-American female is a huge deal. To me, I’m the one doing it and the one accomplishing all of these things. I don’t take the time to sit and think about it. But when I talk to people who say, "Wow, you are such a huge inspiration," especially being a Mexican-American woman and where I come from, I realize it is significant to a lot of people. There’s not many Mexican-American women who have been very successful in boxing. You've got to be different for fans to accept you. That’s something I’ve been able to do. I’m just super excited to keep accomplishing even more.

— As told to Steven Muehlhausen