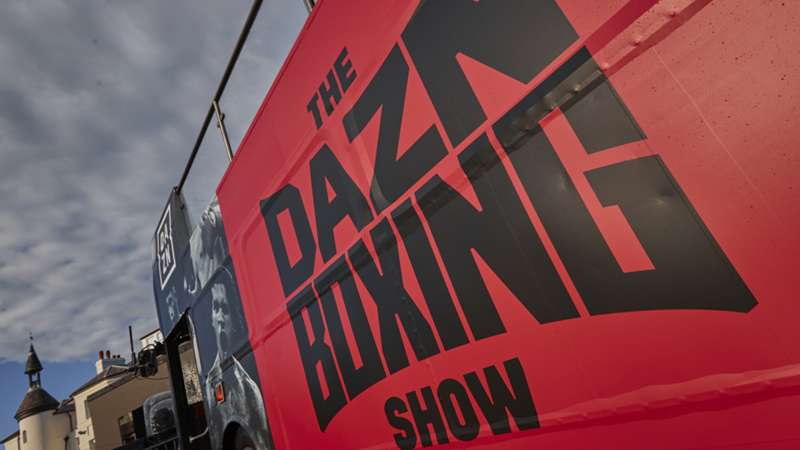 The DAZN Boxing Show brings you guests, topics and debates from the entire world of boxing.

Each weekday, DAZN brings together all of the latest talk across the world of boxing in The DAZN Boxing Show, airing exclusively on the sports streaming service.

The Show brings you a regular offering of exclusive interviews with boxers, trainers and fight fanatic celebrity guests. In addition, there are weekly previews and post-fight night fallout from every big fight, as well as original content such as 'Jabs' with Chris Mannix and Sergio Mora.

It covers the entire sport, tackling topics on more than just the latest cards that air live on DAZN. Fighters from Top Rank, PBC, Frank Warren's Queensberry and more join the hosts to discuss their upcoming fights and future plans.

Plus, The Show also hits the road to air live from fight night locations, including recent episodes streamed on the official DAZN Boxing YouTube channel from Matchroom HQ in Brentwood, Essex, ahead of Fight Camp 2.

Here's everything you need to know about The DAZN Boxing Show.

The Show airs each weekday, mostly at 4pm on the US East Coast and 9pm in the United Kingdom.

* However, please note that this is subject to change on any given day, and that live episodes on location also often have a different 'first-air' time.

How to watch The DAZN Boxing Show

The Show airs in full exclusively on DAZN, the sports streaming service. You can find out more here about subscribing to DAZN for The Show, even more original boxing content, a ton of classic archived fights and fantastic live cards each month.

You can check out what's on tap via the schedule page, here .

Can I watch old episodes online?

You can indeed! Check out The DAZN Boxing Show's page for recent interviews, debates and more.

Here's what you can expect to enjoy on a weekly basis on The Show:

Longtime hosts of The Ak & Barak Show on DAZN and Sirius XM Fight Nation, A&B deliver daily exclusives from names in the boxing world including fighters from Matchroom, Top Rank, Golden Boy, Frank Warren's Queensberry and more. They also discuss hot topics including monthly pound-for-pound rankings, who should challenge the current boxing champions next and more.

During Fight Camp 2 in the summer of 2021, The Show aired live on location from Mascalls in Brentwood, home of Matchroom Boxing and the picturesque site of Fight Camp. Ade Oladipo and former world cruiserweight champion Tony Bellew presented exclusive interviews, fun 'challenge' segments and more from Eddie Hearn's back garden.

Let's throw some jabs!  Join Mannix and Mora as they debate contentious topics across all of boxing, but be warned: things often get heated! Chris and Sergio don't often see eye-to-eye, and the results are always entertaining.

A local flavour accompanies the UK version of The DAZN Boxing Show as Adam Catterall and Nick Peet discuss boxing's biggest issues. Working together for a number of years, Adam and Nick get the inside scoop on all of boxing's big talking points.

Most weeks, Eddie Hearn himself drops by The DAZN Boxing Show to keep fans informed of all the latest news on fight negotiations as well as his thoughts on the latest happenings around the sport.

Here is a list of devices where DAZN is available, including web browsers on DAZN.com.