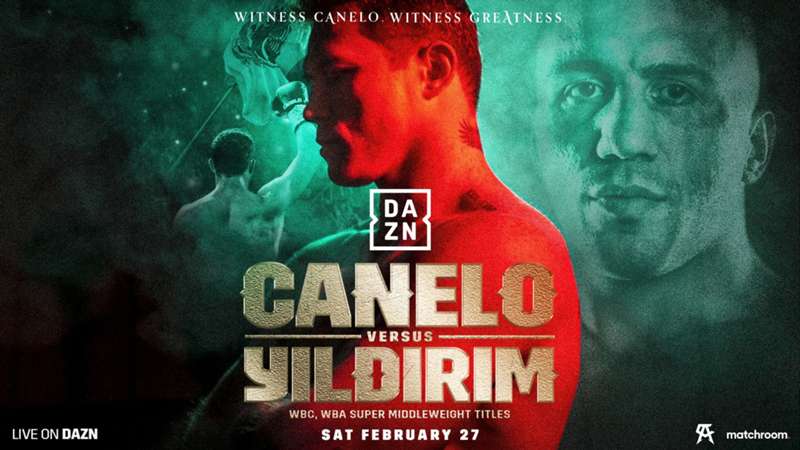 DAZN
Click here to watch Canelo vs. Yildirim on DAZN

Canelo Alvarez puts his WBC and WBA (Super) super middleweight titles on the line against Avni Yildirim on Saturday night, live on DAZN.

Canelo Alvarez returns to fight on Saturday for the second time in 70 days when he puts his WBA (Super) and WBC super-middleweight titles against Avni Yildirim from Hard Rock Stadium in Miami, live and exclusively on DAZN in over 200 territories worldwide (excluding Mexico).

On Dec. 19 at the Alamodome in San Antonio, Alvarez dominated Callum Smith to win via unanimous decision to capture the WBA (Super) and WBC belts. But the caveat of the WBC strap being on the line was it had to be defended within 90 days versus Yildirim. Alvarez had no problem with that as he wants to be active since he only stepped into the ring one time in 2020 and wants to become the undisputed champion at 168 pounds.

Yildirim, 29, competes for the first time in two years after losing a controversial technical decision to Anthony Dirrell in February 2019. Dirrell suffered a cut due to an accidental headbutt in the tenth round, and the contest was stopped. Yildirim ended up being up on one scorecard, but that wasn't enough to win.

Will Alvarez blow through Yilidirim as many boxing pundits expect, or will the native of Turkey pull off the upset? Here are all the details on how to live stream Canelo Alvarez vs. Avni Yildirim.

What time is Canelo Alvarez vs. Avni Yildirim?

The Canelo Alvarez vs. Avni Yildirim main card launches at 7 p.m. ET on Saturday night, with the challenger and champion expected to make their ring walks at approximately 10 p.m. ET, depending on the length of the earlier fights.

How to live stream Canelo vs. Yildirim

The card will stream live on DAZN in upwards of 200 countries and territories (excluding Mexic, where it will be shown on TV Azteca)). The global sports live streaming platform works with many Internet-connected devices and smart TVs.

Click here to learn more about DAZN in your region.

Where is the Canelo vs. Yildirim fight happening?

Alvarez will defend his WBA (super) and WBC super middleweight titles against Yildirim at Hard Rock Stadium in Miami with a limited number fans in attendance due to the ongoing coronavirus pandemic. Alvarez and Yilidrim compete at the venue for the first time.