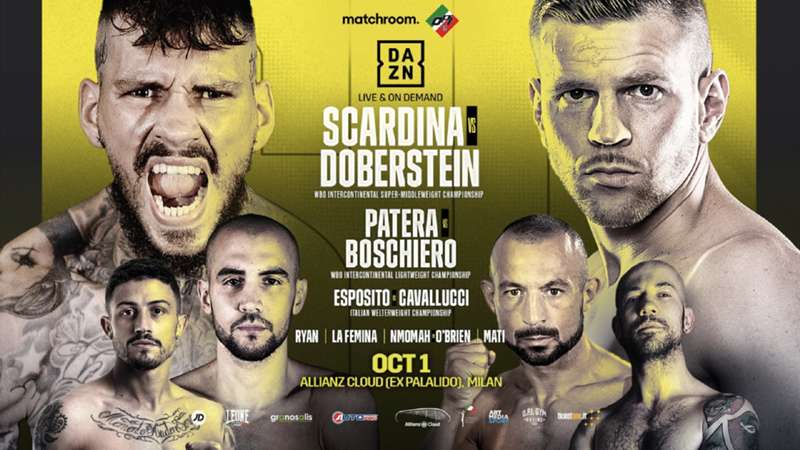 Boxing returns to Italy this Friday.

Daniele Scardina is in action on Friday night when he faces experienced German fighter Juergen Doberstein for the vacant WBO Intercontinental super-middleweight title as Matchroom Boxing returns to Italy on October 1, with all of the action shown live on DAZN.

Scardina is undefeated in 19 with 15 knockouts to his name, and last fought aganst Cesar Nunez in February, when he needed eight rounds to claim the EBU super middleweight belt by stoppage.

Scardina is ranked No. 11 by the IBF. He could move up into the governing body's top ten as he pushes for a world title fight with the 29-year-old Italian coming up against strong opposition in Dobertsein, who has 31 fights to his name.

Here's everything you need to know for Scardina vs. Doberstein on Friday.

The broadcast on DAZN begins at 7pm local time in Italy, which is 6pm in England, 1pm in New York and 10am in Las Vegas. The Scardina-Doberstein main event will not begin before 10pm local time, though the exact ringwalks will depend on any undercard overrun.

Can I watch Scardina vs. Doberstein on DAZN?

The card will stream live on DAZN across the globe. You can sign up for a subscription here. However if you are in Argentina, Chile and Colombia you must download the DAZN app from the Apple App Store or Android Google Play store and then sign up from there, rather than via web browser.

Where is the Scardina vs. Doberstein fight?

The card will be staged at the Allianz Cloud in Milan, Italy. The venue played host to Scardina's last three bouts, while this will be Doberstein's first fight in Italy.