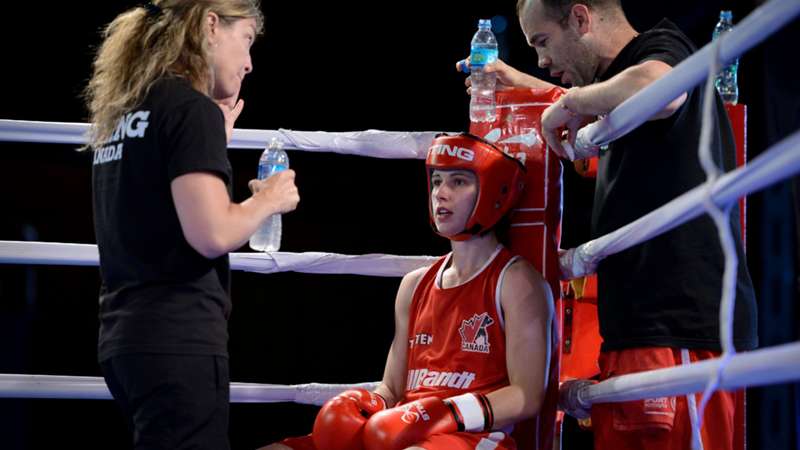 The five-person team is hoping to win Canada's first boxing medal since 1996.

The lone male on Canada's boxing team in Tokyo, 22-year-old Sanford will be making his Olympic debut in the men's welterweight division.

Sanford's preparation has been less than ideal due to the COVID-19 pandemic, with the Nova Scotia native not having fought in an international bout since 2019. He'll have to transition from training matches to real-life competition with the entire world watching.

“Normally, we would have a warmup fight where we just box at an international tournament and we get the feel of the atmosphere," Sanford said last month. "No way to set the atmosphere for this competition. We’re going from zero to 100 really fast. Usually, when I get back in the ring, it’s now on the biggest stage in the world.”

When the 33-year-old flyweight steps into the ring in Tokyo, she'll become the first Canadian woman to do so at two Olympic Games. Bujold looks to improve upon her fifth-place finish at Rio 2016, but her participation in Tokyo was far from certain as she had to appeal to the Court of Arbitration for Sport in order to compete at the Games this summer.

At issue was Bujold's lack of world ranking, which was used to decide the qualifiers for the Games after the usual continental and global tournaments that decide these things were canceled due to the pandemic. Bujold was on maternity leave prior to the qualification tournaments' cancellation, leaving her without a ranking and having to fight outside the ring just to be able to step back into one.

"Very excited to announce that the decision by the Court of Arbitration for Sport was released this morning," Bujold wrote on Instagram on June 30. "I am proud to say that my legal battle was won. The new qualification criteria must include an accommodation for women who were pregnant or postpartum during the retroactively chosen qualification period.

"My Olympic dream is still intact."

Debuting in the Olympics at the age of 37, Da Silva is a three-time Canadian champion and has an international pedigree with a 2019 Pan Am Games silver medal to her name.

“Being a boxer since 2007, I am excited and especially proud to take part in the first Olympic edition of the women’s welterweight,” Da Silva said. “This addition is an important advancement for girls in the sport, and I am proud to be part of this group to continue advancing women’s boxing.”

"Four years ago I embarked on a new journey and I am so grateful and proud of all the growth and progress I’ve made during this time," Thibeault wrote on Instagram in May. "Couldn’t be happier to represent Canada at the Tokyo 2020 Olympic games this summer!"

Born in Paris and raised in Montreal, the 32-year-old missed out on the 2016 Games due to injury. Now healthy and ready to make up for lost time, Veyre isn't about to let the opportunity slip through her hands.

"I’m so honored and proud to announce that I’m officially qualified for Olympics! After 14 years of hard work and dedication, I can finally see one of my lifetime goal happening," she wrote on Instagram in May. "Let’s get it!"