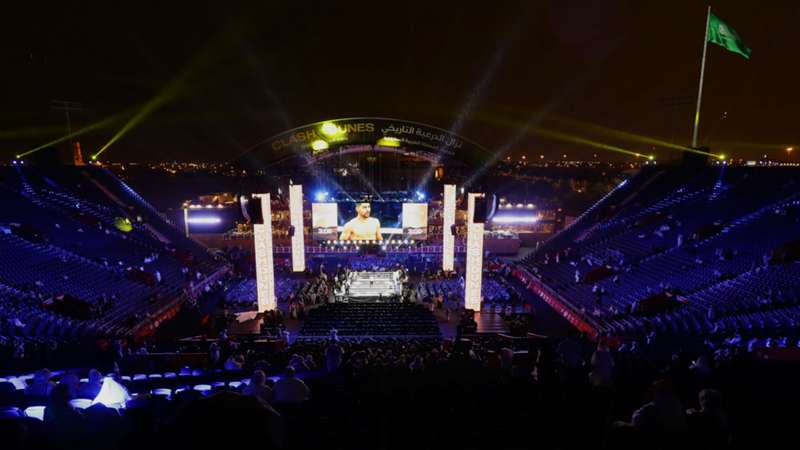 The Ruiz-Joshua rematch will take place from Diriyah Arena in Saudi Arabia.

Everywhere from London, Cardiff and even running it back in New York City were tossed around as possible destinations to host Andy Ruiz vs. Anthony Joshua 2.

However, when it was all said and done, the highly anticipated rematch had been booked in a rather unlikely location — Saudi Arabia. Ruiz will defend his unified world heavyweight championship against Joshua at the newly constructed 15,000-seat Diriyah Arena, and live on DAZN, on Saturday.

The rematch has been dubbed the "Clash on the Dunes," and as the fight nears, both fighters are getting more excited by the day.

“It’s going to be an incredible night and I’m thrilled so many of my fans are going to be there, particularly from the UK," Joshua said in a Matchroom Boxing press release. “It’ll definitely be a night people will tell their grandchildren they were at, one of those iconic evenings of boxing. Everyone from Saudi has been brilliant to work with."

Will Ruiz prove that his seventh-round TKO of Joshua back on June 1 was far from a fluke, or will Joshua become a two-time unified world champion and reassert himself as arguably the top heavyweight in the game?

Here's a complete guide to the exotic boxing location that is Diriyah, Saudi Arabia for this fight.

Where is the Andy Ruiz Jr. vs. Anthony Joshua 2 fight?

The Ruiz vs. Joshua rematch will take place from Diriyah Arena in Diriyah, Saudi Arabia, which is near the country's capital city of Riyadh. The custom 15,000-seat arena's backdrop offers a gorgeous view of the Riyadh skyline.

Although there have been boxing events held in Saudi Arabia in the past (the WWE has held events there as well), Ruiz and Joshua will be fighting in the kingdom for the first time, with their heavyweight title rematch easily being the biggest boxing event to ever take place there.

Why is the fight in Saudi Arabia?

As aforementioned, London, Cardiff and New York City were thrown around as possible hosts for this Ruiz-Joshua rematch. Ruiz made it clear he didn't want the fight in the UK and even suggested that the bout be held in Mexico. However, Matchroom Boxing president Eddie Hearn ended up getting an unlikely offer from Saudi Arabia.

Although there was criticism for the choice of Saudi Arabia as the venue, Hearn said it was an opportunity to grow the sport, and told DAZN's Chris Mannix, "I don't think we can ignore the potential for boxing in the Middle East."

At the final press conference leading up to the fight on Wednesday, Hearn said:

“We were very close to going to Cardiff, and very close to taking this rematch back to Madison Square Garden in New York. We even looked at Mexico. I had finally made the decision to keep the fight in the UK, but then I got the call from Saudi. I think I was quite rude at first actually, I told them not to waste their time because we were taking the fight to Cardiff. But the passion they had to bring this fight to Saudi Arabia was unmatched and within four or five days, we have an agreement to stage this fight here. Sometimes there was shock and criticism, but this was an absolutely wonderful decision. ... The is a new dawn for the sport of boxing.

Hearn's father, Barry Hearn, told iFL TV that boxing is a global sport, and that it was in the fighters' best interest for them to listen to offers from all countries.

"Saudi Arabi and the Middle East generally are spending an awful lot of money, huge money, to attract big sporting events, and our duty to our clients is to maximize their earnings.

"[Boxing] is a dangerous game, whatever they get they deserve and quite frankly the place that pays the most money gets the best fights."

In the United States and Canada, the fight will be shown exclusively on DAZN, the global sports live-streaming service.