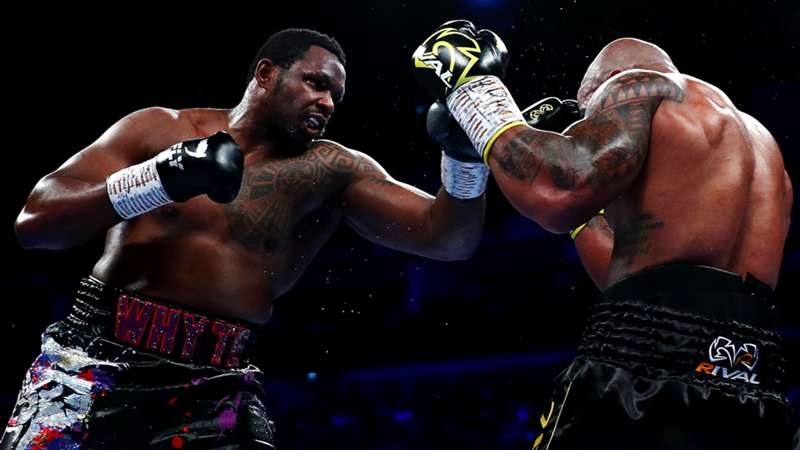 Dillian Whyte has been the No. 1 contender for the WBC heavyweight title for more than 600 days with no hint of him fighting titleholder Deontay Wilder in the near future. He changed that Saturday.

The win means that Whyte must have a title fight in place by the end of May 2020.

"We’ll see," Whyte said in his postfight interview on whether he will get a shot to become the full champion. "This is boxing. A lot of things get said and not a lot happens. We will see. 'Mandatory' can mean I’m waiting another 600 to 700 days. Let’s see."

Rivas came out the aggressor, and it looked as though he was going to make Whyte work extra hard to capture his first major world title.

Instead, Whyte (26-1, 18 KOs) did what most heavyweights are reluctant to do: utilize the jab. He kept pumping it at will and and daring Rivas to come inside. When the Colombian did come in, Whyte made him pay by pounding the body and throwing crisp uppercuts.

Whyte looked to have things well in hand until Rivas sent him to the canvas with a right uppercut in Round 9. Knowing he was behind on the scorecards, Rivas let it all hang out, but Whyte roared back at the end of the round to steal back the momentum. "The Body Snatcher" cruised from there.

Whyte also said during his postfight interview that he isn't going to wait around to see what happens with the championship. He plans on fighting in November or December and then see how things shake out. Wilder is expected to face Luis Ortiz in the fall. If he wins, then he would go on to a rematch with Tyson Fury, who recently said the two would be fighting on Feb. 22, 2020.

Here is what happened on the Dillian Whyte vs. Oscar Rivas card.

Round 12: Needing a knockout to win, why Rivas waited one minute into the final round to throw power punches is beyond me. He needed to come out firing and chose not to do it. Rivas landed good body shots but couldn't connect on anything upstairs. Should be a decision win for Whyte. (Rivas, 10-9; 116-111, Whyte)

Round 11: Give Rivas credit for hanging in there. He's absorbing a ton of punishment, his left eye is closed shut, and yet he continues to give it everything he has. Rivas needs a stoppage to win. (Whyte, 10-9; 107-101, Whyte)

Round 10: Rivas emptied the tank from the previous round; he had nothing to give in this one. Whyte took advantage and reestablished the jab to preserve his own engine for the final two rounds. (Whyte, 10-9; 97-92, Whyte)

Round 9: What a dramatic turn of events as Rivas went for broke. He got Whyte against the ropes and dropped him with a right uppercut. Rivas continued a relentless pace throwing everything including the kitchen sink. We have a fight in London. (Rivas, 10-8; 87-83, Whyte)

Round 8: Whyte is doing what he wants and when he wants to do it. He's going to the body and going upstairs, and there isn't much Rivas can do about it. Rivas needs a knockdown to get himself back in it. (Whyte, 10-9; 79-73, Whyte)

Round 7: Just when Rivas looked to have things figured out by going to the body, Whyte regained control. He came back and landed three hard body shots to steal the round back. (Whyte, 10-9; 69-64, Whyte)

Round 6: Where has this Dillian Whyte been? He's never thrown this many jabs in a fight that I've seen of him. Rivas is swinging and missing by a mile anytime he throws a power punch. He has to come up with a new plan and in a hurry. (Whyte, 10-9; 59-55, Whyte)

Round 5: Whyte is making it look easy. He's controlling the jab and now is slowly implementing power shots. He landed a sharp uppercut through Rivas' guard. (Whyte, 10-9; 49-46, Whyte)

Round 4: Very surprised to see Whyte continuously throwing the jab, but it's working and keeping Rivas at bay. Rivas needs to figure something out or Whyte can do this the rest of the way. (Whyte, 10-9; 39-37, Whyte)

Round 3: It was a battle of the jabs until the last 20 seconds of the round when Whyte landed another hard, short right cross. Rivas has a chin on him. Let's see if Rivas starts to throw some power shots. The Colombian has been content with the jab the last two rounds. (Whyte, 10-9; 29-28, Whyte)

Round 2: Whyte needed that round because he didn't want to get behind. He connected on a sharp right cross to wobble Rivas. Whyte smelled blood and went for broke. To Rivas' credit, he survived the onslaught and came back and continued to establish the jab. (Whyte, 10-9; 19-19)

Round 1: Rivas couldn't have asked for a better start. He controlled the tempo, made Whyte back up and landed the crisper shots. (Rivas, 10-9)

5:50 p.m.: It is now time for the main event of the evening as Dillian Whyte meets Oscar Rivas for the interim WBC heavyweight championship.

Whyte (25-1, 18 KOs) has been ranked the No. 1 contender by the sanctioning body for more than 600 days but still couldn't get a crack at champion Deontay Wilder. "The Body Snatcher" has reeled off nine consecutive wins since losing for the only time in his career, via seventh-round knockout to former unified champion and fellow Englishman Anthony Joshua in December 2015, Rivas (26-0 18 KOs) had been slowly rising through the ranks until he made himself a force to be reckoned with by stopping former title challenger Bryant Jennings in the 12th round in January.

Who will win his first major world title?

The fight ended when Allen told his corner that he couldn't continue and wouldn't come for the 11th round. A smart move by Allen. He wasn't doing much in there and had turned into nothing more than a punching bag.

Give Price credit. He had been written off by his countrymen and told he would lose. Instead, the 36-year-old put in a solid night's work by going past the seventh round for the first time in his career. Price showed a solid jab and decent power. Just wish he would have stepped on the gas pedal a bit more as he could have won the fight a lot earlier than he did. Even though he didn't, Price lives to see another day.

5:15 p.m.: If you had this one going past the eighth round, you win the prize. Price should have a sizable lead on the scorecards. He has never been past the seventh and still is rather fresh. Be nice for Price to ramp it up a bit and put Allen away. Allen's leaving the openings, but Price appears gun shy to do it.

5 p.m.: After four rounds, this feels like nothing more than a glorified sparring session with a ton of jabs, slow body shots and neither guy willing to let his hands go.

Who is going to break through in the battle of British heavyweights?

A good setup by Chisora to lead to the finish as he threw a left hand to the body. Chisora immediately threw an overhand right hand to stun Szpilka. Chisora dug in a couple more body shots and then finished with a right and left hook and one more vicious right hook to send Spitzka down for the count.

Chisora (31-9, 22 KOs) has now won four of his last five. The 35-year-old challenged former WBO titlist Joseph Parker to face him next. Not a bad fight for either guy to see where they stand in what has become a deep heavyweight division.

4:05 p.m.: The main card of Whyte vs. Rivas begins with Derek Chisora vs. Artur Szpilka in heavyweight action. Szpilka (22-3, 15 KOs) is a former WBC title challenger who lost by ninth-round knockout to Deontay Wilder in January 2016. The Poland native comes in having won back-to-back fights. Chisora (30-9, 21 KOs) is a local favorite who has won three of his last four. A battle of fringe contenders that could be fun because it's between two heavyweights who have nothing to lose — or a snoozer featuring two guys who will run out of gas early and barely manage their way to the bell.

3:33 p.m.: A big turnaround in the fight for Riakporhe in the seventh round. He wobbled Billam-Smith with a blistering left hook and pounced on the opportunity, landing a series of power shots that sent part of Billam-Smith's body through the ropes which is considered a knockdown.

2:59 p.m.: Headlining the Whyte vs. Rivas prelims is Richard Riakporhe vs. Chris Billam-Smith in cruiserweight action. Billam-Smith and Riakporhe are both 9-0 with eight knockouts apiece. Somone's "0" has to go.

2:45 p.m.: Smith def. Riyaz by TKO at 3:00 of the second round. Smith did exactly what he should have done against someone who should never step inside a ring again, as Riyaz is now 6-166-4 with three knockouts. That isn't a typo, ladies and gentleman.

2:33 p.m.: Up next at Whyte vs. Rivas, Dalton Smith takes on Ibrar Riyaz in junior welterweight action. Smith is only competing in his second professional fight after a stellar career in the U.K. amateur ranks. But Riyaz is 6-165-4. Yes, you read that correctly as original opponent Reece Smith dropped out late. That is without a doubt the worst record in the history of boxing.

2:30 p.m.: Okolie def. Gudino by knockout at 2:59 of the seventh round. Not the best performance for Okolie due to Gudino being a short-notice opponent. However, he still put him away with three knockdowns in the seventh round.

Okolie (13-0, 10 KOs) sent Gudino down for the first time with a right hand to the body immediately followed by a left hook. Realizing he had the slippery Gudino on the ropes, Okolie connected on a right uppercut to send Gudino down for the second time. The finishing blow occurred when Gudino tried to throw a right hand and missed. Okolie moved slightly to the right and dropped Gudino one final time with another right uppercut. Gudino made it back to his feet, but the referee had seen enough as the bell sounded to end the round.

You can see Okolie has work to do and needs more polishing, but he is someone to watch out in what is starting to become a sneaky good cruiserweight division.

2:18 p.m.: We are halfway through and Okolie has it well in control. It feels like he can put Gudino away whenever he chooses.

2:09 p.m.: Okolie sends Gudino to the canvas in the early part of the third round when he threw a left jab followed by a straight right hand to the temple. Okolie had Gudino shaken up but didn't press the issue in trying to put him away. Shouldn't come back to haunt him but something he will need to learn to do when he takes steps up in competition.

1:58 p.m.: Right now at Whyte vs. Rivas is Lawrence Okolie taking on Mariano Angel Gudino in cruiserweight action. Okolie (12-0, 9 KOs) is one of the most exciting young cruiserweights in the world. He's competing for the third time in 2019 with stoppage wins in the third and fourth round, respectively. Don't expect this one to go the distance.

1:45 p.m.: Welcome to live coverage of Whyte vs. Rivas. It should be an exciting afternoon from across the pond, so grab refreshments and let's enjoy some great action.