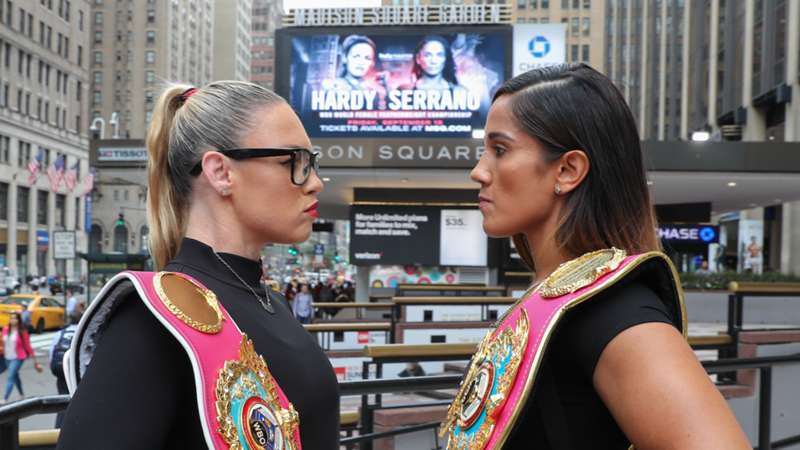 Ahead of their co-main event Friday night, Heather Hardy, Amanda Serrano and their promoter, Lou DiBella, are all pushing for better pay in women's boxing, as the wage gap between genders remains high.

NEW YORK — Matchroom Boxing president Eddie Hearn was still talking on the Devin Haney-Zaur Abdullaev press conference dais Wednesday and about to introduce Lou DiBella when the veteran promoter started making his way onto the stage.

Once he took over the podium, it became evident that DiBella had something to get off his chest.

“This is as good as it gets,” DiBella began saying about Heather Hardy defending her WBO featherweight title against Amanda Serrano at the Hulu Theater at Madison Square Garden, live on DAZN, as the co-main event of Friday night’s card. “These are the two best female fighters in New York. They have carried the torch and the banner for women’s boxing in this city for years.

In unison, Hardy to his right and Serrano on his left nodded their heads and clapped their hands in great approval.

“The paydays they’re getting are solid paydays for women,” DiBella added for good measure, before going on to assert that although Haney has the main event honors, Brooklynites Hardy and Serrano sold the show.

After the press conference concluded, Hardy and Serrano engaged in a traditional faceoff, but they were in full agreement that DiBella nailed it. Especially Hardy, the fighter who has been promoted by DiBella for the longer amount of time.

“Lou came up there and told it just how it is — me and Amanda sold the show to the media, to the press, to the box office,” Hardy offered, while speaking with DAZN. “We sold the show.”

As DiBella mentioned, both Hardy and Serrano are earning career-high purses for this fight and those checks are solid “for women,” but they pale in comparison to what the men are making.

“A man selling the show would be making in the millions,” Hardy said. “We’re not even making six figures. So, while the rest of America is watching women make a payday of 80 cents to the dollar, women in boxing are making 15 to 20 cents (to the dollar) of a man’s salary. It’s a blatant discrepancy.”

Added DiBella: “A career-high payday from the women’s perspective — they’re probably getting a little over 10 percent of what Devin Haney is getting in the main event."

Serrano also pointed out that although this is indeed a career-high purse, it’s the same amount that she made in her last fight this past January.

“I think I deserve a little more than what I got,” Serrano said of her pay for Friday night’s fight. “I’m getting the same pay that I did in my last fight against Eva Voraberger, and Eva Voraberger and Heather Hardy are two different fighters.

“Heather Hardy is a champion and she’s an undefeated champion, and to be getting paid the same isn’t a step in the right direction,” she continued. “I’m still getting paid (a career-high), but it’s not the best.”

Some of what Serrano illustrated represents the true frustration in the wage gap between genders in the sport.

At 30, Serrano is the only woman in boxing history to be a seven-division world champion. (Manny Pacquiao stands as boxing’s only eight-division world champ). Her 35-1-1 record, including 26 knockouts, speaks to the power in her punch that she has displayed for over 10 years throughout her pro career.

At 37, Hardy is the reigning WBO featherweight titleholder with a pristine 22-0 ledger, including four KOs and one no-contest.

If two men with such records were entering the ring for such a super fight, they’d be in the main event making seven-figure — possibly eight-figure — paychecks. As aforementioned by Hardy, neither her nor Serrano are netting even six figures for this mega bout.

That’s precisely why both of the Brooklyn women have crossed over to mixed martial arts. Hardy is 2-2 competing in Bellator MMA, although the learning curve has been stiff.

Serrano has gone 1-0-1 in Combate Americas, as she has also felt the difficulties of adjustments to MMA.

Still, it's what needs to be done, when their love and relationship with boxing is leaving plenty to be desired.

Last October, while preparing for an MMA bout and before claiming her seventh-division world title in boxing, Serrano told Sporting News that “my sixth-division boxing world title fight was less than my second MMA fight and first MMA fight,” comparing the pay between the sports. Both Serrano and Hardy have even had to train clients in boxing to make extra cash.

While Serrano, Hardy and their promoter DiBella push for fairer treatment, they're in agreement that making women’s boxing three-minute rounds wouldn’t do anything to help their pay at all. In fact, all three knocked out the notion, altogether.

Added Hardy: “Two-minute rounds are harder because you have to work more. You don’t get as much of a break, you can’t dance around. We spar three minutes in the gym, so it’s not like we’re not prepared for it.”

Serrano mentioned that her older sister, Cindy Serrano, once fought three-minute rounds in a January 2008 bout against Layla McCarter in Las Vegas, but also concluded that the extra minute isn’t needed in women’s boxing.

“Just because we fight an extra minute doesn’t mean we’re going to make more money,” she said. “I’m going to do my job in two minutes.”

So, while Hardy and Serrano are getting career-high paydays and continued exposure, as this fight is on DAZN, women’s boxing has ways to go.

“Women’s boxing has made tremendous strides lately, but it’s starting at such a low place, such a low point that the strides are not sufficient,” DiBella said. “There are too many female world champions that have to work full-time jobs because they can’t pay their bills.

Until then, Hardy and Serrano will certainly give it all they have Friday night, with the winner not only claiming the WBO featherweight strap, but getting a shot at undisputed world lightweight champion Katie Taylor in a bout that should grant either Brooklyn fighter another career-high payday.

“When it comes to me and Amanda,” Hardy said about their penchant of delivering action-packed fights, “we don’t know how to do anything else.”