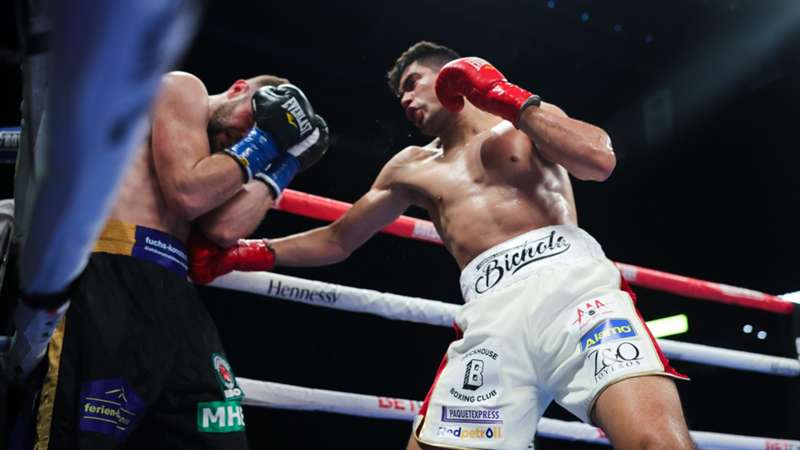 Gilberto Ramirez continued his journey towards a light heavyweight title opportunity and calls out the Canelo Alvarez conqueror.

On Saturday, the hunt for a light heavyweight title shot continued for Gilberto Ramirez as he took on fellow top contender Dominic Boesel on DAZN (excluding Mexico). The winner would become the mandatory challenger for WBA (super) titlist Dmitry Bivol.

Ramirez continued his torrid run at 175 pounds as he pounced Boesel from the outset to score a knockout at the 1:33 mark of the fourth round from the Toyota Arena in Ontario, Calif. DAZN scored the fight 30-27 for Ramirez at the time of the stoppage.

THAT WILL DO IT

Zurdo Ramirez finishes it in the 4th round 🔥 #ZurdoBoesel pic.twitter.com/MHPOHcAwSH

Ramirez (44-0, 30 KOs) made it clear that he wants Bivol next and sent a stern message to the man who dethroned Canelo Alvarez last weekend .

"Everyone knows I want Bivol," Ramirez told DAZN's Chris Mannix. "Stop running. Make sure you sign the contract next time. I’m coming for you."

The former super-middleweight champion is 5-0 with five knockouts since moving up to 175 pounds. So what makes "Zurdo" feel that he can do what Alvarez could not do?

"Because I’m stronger, smarter, bigger than him, and handsome," Ramirez said.

It is unknown if Alvarez will invoke his rematch clause coming off the upset. However, if he chooses not to, why not Bivol-Ramirez, as they both fight under the DAZN banner and should be easy to make.

Here is what happened between Zurdo Ramirez and Dominic Boesel.

Ramirez def. Boesel via knockout at 1:33 of the fourth round.

The referee told Boesel's corner that he needed to show something or he will stop the fight. Two sneaky right hands for Boesel. A short uppercut landed for the native of Germany.

Ramirez got Boesel back in the corner and unloaded another combination. A straight left catches Boesel, and it wobbled him. Then, a left uppercut and a right to the liver sent Boesel on his way, and one more left uppercut sent him to a knee, and it's waved off.

An outstanding performance from Ramirez, who goes to 5-0 at light heavyweight with five knockouts.

THAT WILL DO IT

Zurdo Ramirez finishes it in the 4th round 🔥#ZurdoBoesel pic.twitter.com/MHPOHcAwSH

facebook twitter whatsapp
A good shot by Boesel as he backs Ramirez up. Needs much more of those. A body shot makes Boesel nearly go down. Another body shot from Ramirez. Boesel is trying everything to get out of the corner as he's becoming target practice.

Ramirez unloads a flurry of power shots with 30 seconds remaining. Somehow, someway, Boesel is hanging in there.

facebook twitter whatsapp
A left-right lands for Ramirez. Boesel with a left hand, which is the first significant punch thus far. A body shot, and a right uppercut snaps Boesel's head back. Boesel has to find a way to get back into this as he's getting mauled at this point. That is a beautiful uppercut by Ramirez. Another stinging uppercut from Ramirez. A left hook by Ramirez. Boesel keeps looking at the referee for some reason instead of trying to deflect the punishment Ramirez is dishing out. This isn't going to last too much longer. (10-9 Ramirez, 20-18 Ramirez)

Shocked at the 98-92 scorecard as Alvarado more than held his own. Zepeda and Alvarado had a rock-and-sock-em fight, with neither guy taking a back seat to the other. However, Zepeda pulled away in the ninth and tenth rounds, landing the crisper shots and more combinations to bring home the victory and remain undefeated in 26 fights (26-0, 23 KOs).

Zepeda's power becoming too much

facebook twitter whatsapp
Zepeda made Alvarado pay for trading with him in the seventh as a right hook rocked Alvarado. Zepeda continued the onslaught upstairs and the body. Can Alvarado bounce back yet again? Or can Zepeda put him away?

facebook twitter whatsapp
Zepeda and Alvarado are having a throwback affair. They are standing in the proverbial phone booth, throwing in bunches, slipping away. A barnburner thus far as we have five rounds to go in what is anyone's fight after it appeared Zepeda was pulling away.

Zepeda in control after three

facebook twitter whatsapp
Alvarado came out aggressive in the opening round, but Zepeda's roared back in the second and third and imposed his will. But Alvarado's had his moments and is standing in the pocket and willing to slug it out.

The return of William Zepeda

facebook twitter whatsapp
It's time for the co-main event of Zurdo vs. Boesel as William Zepeda (25-0, 23 KOs) takes on Rene Alvarado (32-11, 21 KOs) in lightweight action. Zepeda is one of the most physical fighters in the division. Alvarado, a former super featherweight champion, makes his debut at 135 pounds.

The Main Event stars are in the building 🇲🇽🇩🇪#ZurdoBoesel pic.twitter.com/ifCWbgeQUD

The end began when Ramirez unloaded a right and then missed a right hook. The third right didn't miss as a laser right sent Salvatierra through the ring. Somehow, Salvatierra got up and made it back into the ring but smartly, the referee waved it off.

SCRAPPY RAMIREZ KNOCKED HIM OUT OF THE RING 🤯#ZurdoBoesel pic.twitter.com/PTXxCtS1PQ

facebook twitter whatsapp
Up at next at Zurdo vs. Boesel is John Ramirez (9-0, 7 KOs) facing Jan Salvatierra (8-1, 4 KOs) in super flyweight action.

Katsumi Akitsugi gets a stoppage win to remain undefeated

Akitsugi def. Gonzalez via technical decision as Gonzalez couldn't come out for the fourth round due to an accidental headbutt.

Near the end of the third round, a clash of heads occurred, which caused a cut above the left eye. The cut was deep and in a bad spot, but Gonzalez was looking for a way out. However, he was getting dominated, and Akitsugi was on his way to a stoppage win.

facebook twitter whatsapp
Despite not being known as a power puncher, Akitsugi is showing some strength in the second as he's stopped Gonzalez in his tracks on a couple of occasions, including a buckling left at the end of the round. So let's see if he can close things out.

facebook twitter whatsapp
The Zurdo vs. Boesel main card begins with Katsumi Akitsugi (9-0, 1 KOs) meeting Jose Gonzalez (23-9-1, 13 KOs) in featherweight action. Gonzalez hasn't won a fight since 2017, so this should be an easy night at the office for Akitsugi.

facebook twitter whatsapp
Welcome to DAZN's live coverage of Zurdo Ramirez vs. Dominic Boesel. Stay right here as we provide live updates, results, and highlights of what should be an exciting night of action.