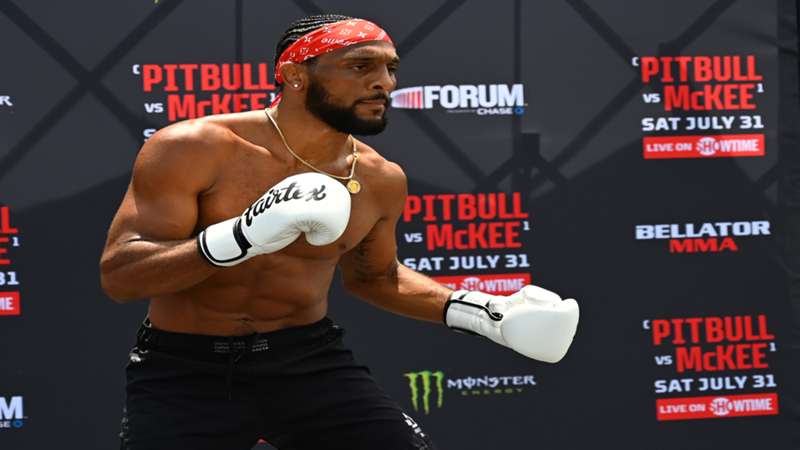 The 26-year-old came full circle with his self-fulfilling prophecy and he's just getting started.

A.J. McKee entered what was built up as the most important fight in Bellator MMA history Saturday night and seized his moment.

His first-round 1:57 annihilation of Patricio "Pitbull" Freire at Bellator 263 not only made McKee the new world featherweight champion but also secured him $1 million for clinching the Featherweight World Grand Prix. As he cinched in the standing guillotine choke to tame "Pitbull," McKee snatched the torch from the promotion's GOAT as its present and next megastar, ushering in a new era oozing with his superstar power.

And be clear, the 26-year-old Long Beach, Calif. native is just scratching the surface because MMA is only beginning to feel the squeeze from the chokehold he's about to lock it in. Exuding confidence with otherworldly skills in the cage to back up his braggadocio out of it, McKee MMA is just taking form.

Before we get to the show out, let's discuss the show up by circling back to March 9, 2020 — just as the COVID-19 global pandemic was about to shut down the world.

That's when Bellator held its New York City press conference for its spring/summer showcase, and McKee began to assert his self-fulfilling prophecy into effect there at the Viacom headquarters.

At the time, McKee was recovering from a late January surgery to repair a torn LCL in his left knee.

"There's seven 0s I'm after — six on my check, one on my record," McKee told DAZN News at the time, suggesting nothing was going to stop him from pressing forward with the Featherweight World Grand Prix. "I don't think anyone else has that much going for them. That being said, I'm a man on a mission, and the rest of these guys, they're like the pawns in this game of chess. If they need to be sacrificed, they gotta go."

McKee made the comments following a testy faceoff with Darrion Caldwell, who some believed could've used his veteran savvy to stop "The Mercenary." Instead, the coronavirus pandemic postponing the fight until November gave McKee additional time to heal his knee, and he produced a first-round submission via neck crank that took just 71 seconds. That win punched his ticket into the final with the legend "Pitbull."

It's the road that McKee envisioned for himself on March 9 and well before, as he wrote a check to himself for $1 million as a 12-year-old boy. But on that March 2020 date, McKee forecasted what the life-changing sum would mean to his life.

"It would make me content in the moment to go and be able to invest that and look forward to every $1 million check after," a smiling McKee told DAZN News. "I feel like if I win a $1 million, being undefeated — when I win the $1 million — why would I go backwards?"

He then spoke about how he'd like to further entrench his growing legacy after the World Grand Prix.

"I want to make a mark on this sport how Floyd (Mayweather Jr.) made a mark on boxing," McKee continued prophesying. "I've always said it ... I'm the Floyd Mayweather of MMA. This being such a hands-on and more brutal, physical sport, it's the lifestyle. I'm looking forward to it."

So is the MMA world, for McKee has accomplished Mission 1 resoundingly and already laid out a blueprint for etching his next chapter of greatness.

"(Freire) said he wasn't out. Maybe he wasn't satisfied, but I could put him out again," McKee said during the post-fight press conference Saturday night about "Pitbull," who still has ownership of the 155-pound lightweight title. "He's got that 55-pound title, so like I said, 'Champ-Champ', I want all them belts."