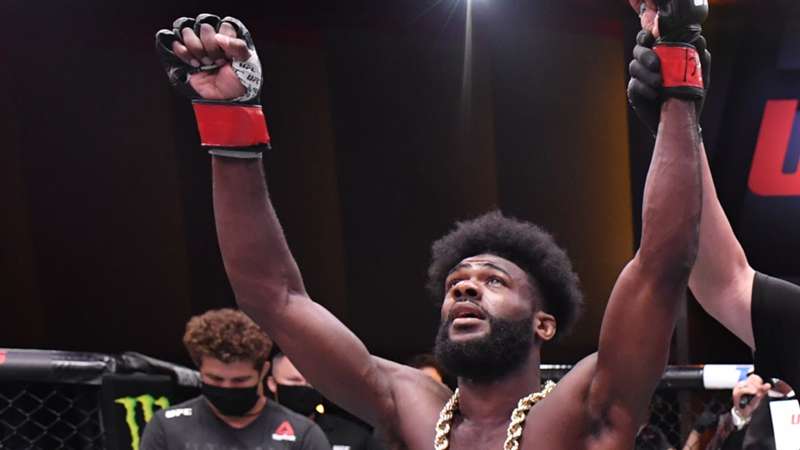 "Funk Master' must defeat the steely Russian to be crowned bantamweight champion at UFC 259 in Las Vegas on Saturday night.

It has already been an impactful few months for Aljamain Sterling.

In December, the No. 1 bantamweight contender unpacked haunting demons from his childhood for the world to see as part of a UFC video feature entitled "Aljamain Sterling: Not Broken." The short documentary included Sterling recalling witnessing his father's domestic violence against his mother as a kid inside their Roosevelt, Long Island, New York home.

After unloading all that weight off his chest to bury 2020, Sterling kicked off 2021 by announcing his engagement to Rebecca Cruz, his girlfriend of 10 years.

Having taken those significant steps, the 31-year-old's coming of age story has converged upon one more road — the pathway of seeing a decade-plus of work come to fruition in the form of being crowned the bantamweight champion of the world.

Sterling will get that chance at UFC 259 on Saturday night, when he challenges bantamweight champ Petr Yan at UFC Apex in Las Vegas. That fight is one of three title bouts on the card, as Amanda Nunes defends her featherweight championship against Megan Anderson in the co-feature and Israel Adesanya trying to become MMA's latest double champ by challenging light heavyweight titleholder Jan Blachowicz.

Sterling knows his fight against Yan could represent a culmination of his mixed martial arts diligence. Now, it's just about seizing the moment.

"This fight is a big lead up to everything that I worked for up until this point," Sterling begins telling DAZN News.

"Ten long years in this sport — a lot of cutting weight, a lot of ups and downs. To finally be in this position, it feels very fulfilling, very rewarding and I feel like I found a ton of success along the way. I've had a great career thus far and this would be the ultimate way to cap it off."

It sure would. Sterling enters the biggest stage of his career riding a win streak of five fights. And Sterling (19-3) built this momentum by living up to his nickname "Funk Master" and showing his opponents different looks each time.

Sterling's striking over this streak has been clever, imaginative; his wrestling living up to his human backpack style and then some. He powered past Jimmie Rivera and Pedro Munhoz via a pair of unanimous decisions in 2019, before making Cory Sandhagen tap to a rear-naked choke just 88 seconds into their bantamweight title eliminator last June.

"Being able to adapt, make changes on the fly is everything," Sterling vows. "This is the best I've ever been. I feel sharp on all fronts: striking, grappling, I've left no stone unturned. I'm in great condition. I'm really just excited to see the efforts that I could put out, the performance I could put out and to see where I pick up from where I left off. If anything is an indicator from the training sessions, I think it's going to be a very good night for myself."

Leading up to Saturday night, Yan (15-1) has been the man at bantamweight. The 28-year-old Russian tore his way through six straight victories, before recording a fifth-round TKO (punches) of Jose Aldo at UFC 251 to take the then-vacant bantamweight strap last July in Abu Dhabi.

This will mark Yan's first title defense. Yan and Sterling have traded jabs during this buildup toward UFC 259, but the time for talking is almost over, as the locked Octagon will finally settle bantamweight supremacy.

"I'm super excited to go out there, mix it up and find out who's the real best guy in this division at this current time," Sterling affirms.

On a more personal note, Sterling wants to prove to himself that he can be No. 1, as shortcomings as a wrestler have fueled his hunger to become champion.

"I just want to prove that I'm the best at something for once in my life," Sterling said. "I started wrestling and wanted to prove I'm the best and came up short.

"I went to college and came up short wrestling there. I placed twice in the nation, but that wasn't good enough for me. It comes down to performing and trying to bring home the gold. I think that helps motivate my training, so I kind of remember what those losses felt like."

What also motivates Sterling is fighting past his past. There's a moment in the "Not Broken" documentary, where Sterling's mom notes the ferocity that Aljamain wrestled with as a youth, perhaps treating the sport as an avenue to unleash his anger from watching her get abused in their household.

Since the doc aired in late December, Sterling says his siblings — a total of 20 — have viewed him speaking out about their childhood differently.

"It was a lot of mixed emotions," he says. "We didn't all grow up together, so some people are going to have different experiences from others. Some of us are a lot younger than the other as well. So, when you factor that in, things are a little bit different on each side, depending on where you sit.

"But for me, the majority of people that I grew up with, they understand where I'm coming from. They see the effect and knows it affects them as well, so I think it's just depending on who you ask. But overall, I think everyone was happy how well put together the piece was and how it came out."

Whether everyone will be happy over the way Saturday night turns out remains to be seen. Fighting amidst a pandemic can't ruin something that Sterling has been coveting as a professional MMA fighter for roughly 10 years now.

"It would have been nice to have a crowd, but at the end of the day, a fist fight is a fist fight," Sterling adds. "I'm just worried about my health and how I enter and how I come out ... and what I come out with.

"I have this opportunity in front of me and I have to make the most of it."

DAZN News will bring you all the live updates, results and highlights from UFC 259, when its main card launches at 10 p.m. ET.