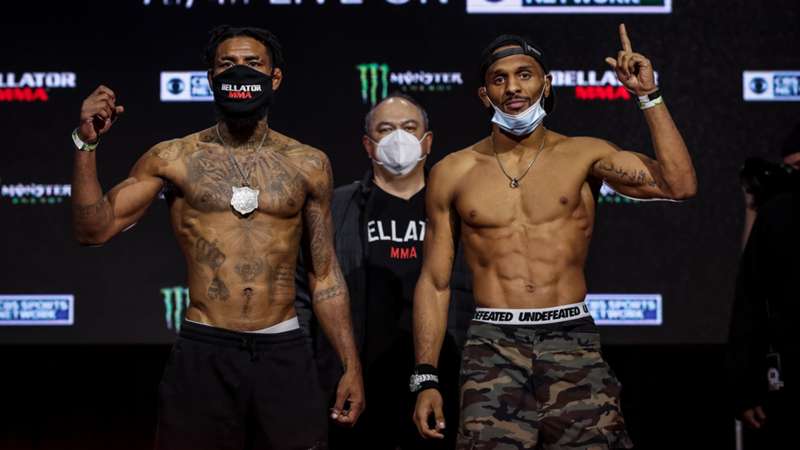 A.J. McKee punched his ticket to the Featherweight World Grand Prix with a stunning 71-second neck crank submission of former champion Darrion Caldwell in the main event of Bellator 253 at the Mohegan Sun Arena in Uncasville, Connecticut.

The undefeated McKee will await the winner of the semi-final matchup between Bellator featherweight champion Pitbull Freire and Emmanuel Sanchez. And if his performance against the former bantamweight champion is any indication, his next opponent will have his hands full.

Caldwell secured a quick takedown in an attempt to stifle McKee’s heavy hands, but it ended up spelling out his demise. The former champion sought to work McKee over with elbows but carelessly left his neck open. McKee calmly worked his right arm into position and trapped Caldwell’s head and began to squeeze. It didn’t take long for Caldwell to realize that he had nowhere to go and started to desperately try to wiggle free.

Unfortunately, it was too late.

This submission from the bottom by @ajmckee101 is unbelievable 😳

McKee’s squeeze was too tight and forced Caldwell to submit at the 1:11 mark.

It’s safe to say that McKee needs the prospect tag removed as he’s a certain threat to become the next Bellator featherweight champion as he improves to 17-0 with his third straight finish inside the distance.

Jason Jackson collected the biggest victory of his career with a unanimous decision over Benson Henderson. The size and strength of “The Ass-Kicking Machine” was too much for Henderson to overcome as he was controlled in every aspect of the fight.

The first round was fought exclusively on the feet as Jackson used his longer reach to outstrike the former champion. A head kick and left hook stunned Henderson late and a spinning backfist by Jackson sent the 37-year-old to the canvas in the closing seconds.

Henderson continued to struggle to find his way inside of Jackson’s reach in the second round. An ill-fated takedown attempt was reversed by Jackson and put Henderson on his back. Eventually, Henderson would reverse position and find his way back to his feet with under a minute left in the round. Jackson controlled the round and punctuated it with a knee to the head for good measure.

It was more of the same in the final round as Henderson simply couldn’t find an advantage as he failed at numerous takedown attempts and was unable to do much of anything outside of a late heel hook attempt that he couldn’t lock in. The result was a clean sweep with scores of 30-27 as Jackson continues to climb the ladder of the welterweight division.