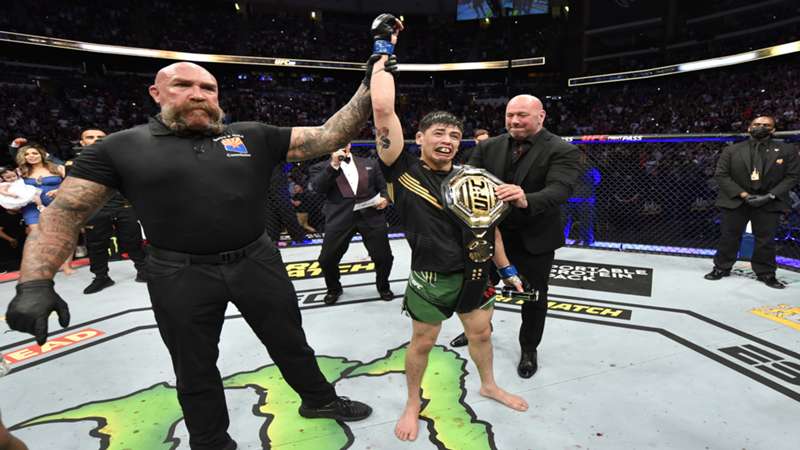 It is personal for UFC flyweight champion Brandon Moreno heading into Saturday's UFC 270?

In June, Brandon Moreno achieved his lifelong dream at UFC 263 when he submitted Deiveson Figueiredo to become the flyweight champion. He expected to put Figueiredo out of his crosshairs after winning the rematch. He dominated the sequel, and new contenders were on the horizon.

However, things in life don't always go as planned. Top contenders Askar Askarov and Alexandre Pantoja were logical contenders. But when the UFC came calling, both were injured and unable to compete. So the UFC went back to Figueiredo, who accepted immediately. Now, Moreno and Figueiredo will meet for the third time in the co-main event of Saturday's UFC 270. It wasn't who Moreno wanted, but it is the person he's receiving for his first title defense.

"It was just because he was the only one available in that moment," Moreno told DAZN News. "The other challengers like Askrov (and) Pantoja, they got injuries, so they couldn’t fight. The only guy available was Figueiredo. When the UFC gave me his name officially, I said yes. That said, obviously, I'm sick of this guy. I don't want to see this guy again anymore. But business is business, and I need to beat this guy again. Hopefully, I don't need to see this guy after UFC 270 (laughs)."

It's difficult to find any sizzle when it comes to trilogy bouts. At this point, we have seen the combatants fight twice, and the storylines are typically the same as before.

This is not the case at UFC 270, as former bantamweight and flyweight titlist Henry Cejudo will be in Figueiredo's corner.

Cejudo and Moreno were extremely close. They had met in 2014, and Cejudo brought him onto his team, including his first fight with then-125-pound champion Demetrious Johnson in April 2016. They were training partners at Cejudo's Fight Ready gym in Phoenix. Their families were close, and the bond appeared to be very strong. That was until The Ultimate Fighter Season 24, as Cejudo and Joseph Benavidez were coaches on the flyweight season. The season was based on a collection of flyweight champions from various promotions, with the show's winner fighting Johnson for the championship.

Usually, the coaches pick the fighters for the show. For this particular season, it was different as the UFC seeded the 16 fighters. So when the coaches selected a fighter, the first-round seeded opponent would go to the other team. Cejudo and Benavidez had no clue how the fighters were seeded until they were picked. Cejudo picked the top seed, Pantoja. The 16 seed ended up being Moreno, which upset Cejudo because of the relationship he'd formed with him.

Moreno and Benavidez developed a kinship during the show and ultimately trained with the latter to face Cejudo at the season's conclusion in December 2016. That upset Cejudo and the two are no longer friends.

As the story goes, after UFC 263 Cejudo saw Figueiredo in a restaurant in Arizona. Cejudo told him that he felt he could make him a better fighter. Talks ensued, and a deal was struck for Cejudo to train Figueiredo. The news surprised people because the two nearly fought when Cejudo was the 125-pound champion. Moreno was shocked more than anyone. That shock turned to motivation in an instant.

"When I hear about it the first time, I can't lie to you, I was a little bit disappointed with talking about all the history before with him," Moreno admits. "But then right now, he's like, I don't care. It is what it is. If he wants to do something to help Figueiredo, it’s fine. Right now, I know he's trying to take money from my family, and I need to do something about it.

"I'm focused. I promise I'm very focused on this guy, and definitely with these Henry Cejudo conversations have put a different flavor of everything. I just want to go there to UFC 270, put on my best performance and beat this guy, and finish all this drama."

People in and around the sport feel perhaps Cejudo is angling for a return to the cage and using Figueiredo to plant the seeds of a Moreno-Cejudo clash should the former take of business this weekend.

Will Moreno call out his former friend if he wins the trilogy at UFC 270?

"You never know," Moreno said. "The guy is so fat right now. I don’t know if he can make 125 again. The guy is a real athlete. He's been cutting weight all his life. I don't know, man, I just want to beat this guy, and we'll see what happens in there."