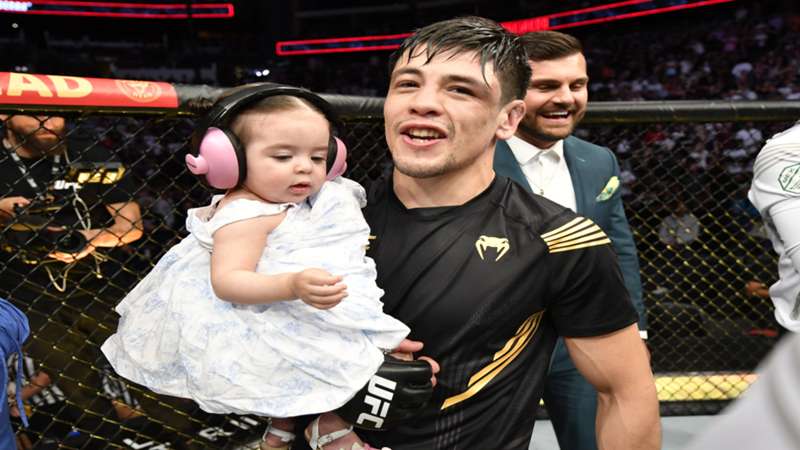 On Saturday night at UFC 263, Brandon Moreno made history when he submitted Deiveson Figueiredo in the third round to become the UFC flyweight champion. Moreno's title victory was the first time a Mexican-born fighter captured UFC gold.

According to Moreno, he had the title won before he even stepped inside the Octagon.

At Thursday's pre-fight press conference, Moreno was seated next to Nate Diaz. They were joking with each other and doling out fist-bumps while Figueiredo stewed and had the look of wanting to punch a hole through the guy he was about to meet for the second time two days later.

"Fight week is always hard because you are cutting weight and have interviews with the media," Moreno told DAZN News on Tuesday. "But at the end of the day, I was very confident about my performance last Saturday. The press conference with Nate Diaz was the first time I met him. An amazing guy and really nice guy. You can tell Deiveson was a little angry. For me, everything was about trying to enjoy the moment. (It) was my first press conference, and it was amazing to watch all the people after all the problems with the pandemic, with no people, no crowds in the arenas. That was exciting."

The look on Figueiredo's face was a sign of things to come during the presser. When UFC president Dana White had the men go face-to-face, Moreno smiled, and Figueiredo shoved him. The move by the former titleholder convinced Moreno that the fight was already won before UFC 263 even took place.

"I felt that even in the press conference when the guy pushed me, I saw his face, and something looked different in that moment," Moreno said. "And the next day, Friday in the last face-off, I saw the same. Keeping his sunglasses on and doesn't want to watch me directly to the eyes.  He looked different. He looked frustrated, like he knew something bad was going to happen in the fight. That fight was mine. I think it was a very dominant performance."

Once they locked horns and the bell sounded, the fight belonged to Moreno. He set the tone from the outset by being the aggressor, landing the heavier shots, and securing the critical takedown that led to Figueiredo tapping out.

When Figueiredo's hand tapped Moreno's body, the crowd inside the Gila River Arena in Glendale, Ariz., became unglued. The crowd was deafening at the sight of the history-making moment. The 27-year-old hugged his coaches, his wife, and his daughter in jubilation. Moreno could see and hear the roar of the people. What happened at UFC 263 is something "The Assassin Baby" will never forget.

"An unbelievable moment for me," Moreno admits. "Every single fighter has a different explosion of emotions. But for me, I felt a lot of peace inside. A lot of calm in my soul. But then, the emotions started to come out. A lot of happiness. I started crying. It was a very emotional moment for everybody in that arena that night. I think the people who pay for their tickets and watch the event on that night had a special moment with me. We are connected right now."

With UFC 263 in the rearview mirror, Moreno is now the hunted instead of the hunter. Many challengers await the new king of 125 pounds. Among them is Figueiredo, who says he wants a trilogy bout in the worst way.

Moreno isn't opposed to returning by the end of 2021 or the early part of 2022 to rest his body from a grueling six-month training camp. He and his team have already had early discussions with the UFC about his first title defense being in Mexico. To Moreno, it doesn't matter who is standing across from him inside the cage. He's going to take a vacation and spend some much-needed time with his wife and three daughters.

"It's not my decision," Moreno said of a potential trilogy fight with Figueiredo. "I'm not part of his team. I think he needs to go to bantamweight. That weight cut is disgusting. I don't know if you saw the last UFC Embedded when he tried to cut weight. He went to the scale, and then he started to cry. That was very dramatic. That doesn't look really healthy to be honest. I think he can make better things in 135. It's not my decision. If the UFC wants the trilogy, I can do it. I don't care. Cody Garbrandt is there too. He lost his last fight against Rob Font, but he's a former champion. He has the name, so maybe it can be a possibility.

"(Askar) Askarov is doing very well. I fought against him in 2019. It was a draw too, so we have some unfinished business. Alex Perez, Alexandre Pantoja, who beat me the last time. The sky's the limit. I just need to wait a little bit. I just need to rest my mind because this fight camp was so long. I need to rest. I need some vacations. I want to go to some nice beaches and take care of my family and spend time with them."