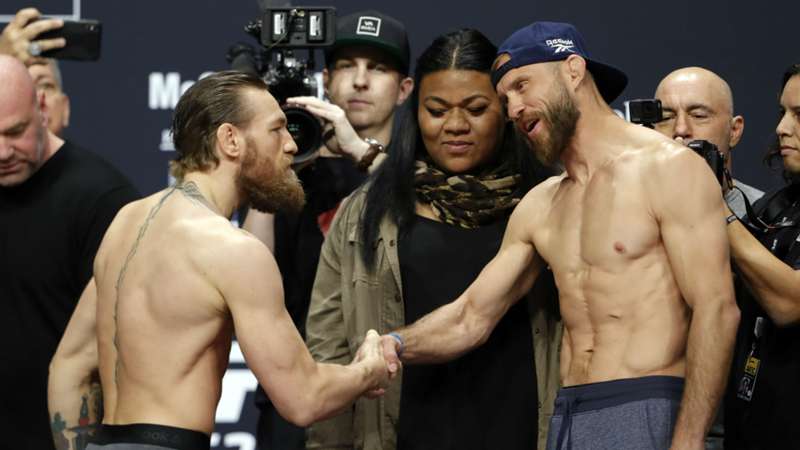 Conor McGregor and Donald Cerrone square off in a highly anticipated clash in the main event of UFC 246.

The UFC kicks off 2020 in style when UFC 246 takes place on Saturday, Jan. 18, from T-Mobile Arena in Las Vegas, as Conor McGregor battles Donald "Cowboy" Cerrone in the main event of the show in a welterweight affair.

McGregor (21-4), the first fighter in UFC history to hold two titles (featherweight and lightweight) at the same time, returns for the first time since losing to current 155-pound champion Khabib Nurmagomedov at UFC 229 in October 2018. The last time McGregor fought at 170 pounds was back at UFC 202 in August 2016, when he beat Nate Diaz by majority decision in what at the time was the biggest event in company history.

Cerrone (36-13, one no-contest) enters the contest on a two-fight losing streak to Tony Ferguson and Justin Gaethje at lightweight. In his previous run at welterweight, Cerrone went 6-4 with all of the victories coming via stoppage.

McGregor's outline for 2020 includes a possible rematch with Nurmagomedov, Jorge Masvidal or welterweight titleholder Kamaru Usman. But standing in the way of any of those battles happening is the man who holds the most wins in UFC history.

McGregor vs. Cerrone live stream: How to watch UFC 246

The UFC 246 clash between Conor McGregor and Donald Cerrone is available on ESPN+ in the United States.

McGregor vs. Cerrone: How much does pay-per-view for UFC 246 cost?

UFC 246 will take place on Saturday, Jan. 18. The early prelims for the event begin at 7 p.m. ET. Prelims begin at 8 p.m. ET and are on ESPN. The PPV event, which features four fights, begins at 10 p.m. ET on ESPN+. McGregor and Cerrone should take their ring walks around 12:15 a.m. ET, although the exact time depends on the length of the earlier fights.