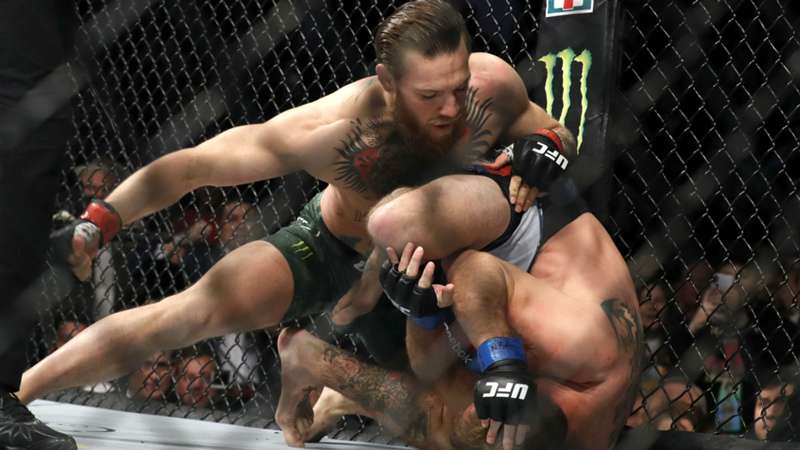 Conor McGregor and Donald Cerrone locked horns in the main event of UFC 246, and the fight didn't last long.

LAS VEGAS — Conor McGregor is back!

What was expected to be a fan-friendly fight ended up being a one-sided affair as the former featherweight and lightweight champion needed only 40 seconds to stop Donald "Cowboy" Cerrone in the main event of UFC 246 at T-Mobile Arena.

It had been 1,160 days since McGregor last had his hand raised in victory, and he was matched up against the UFC's all-time leader in performance bonuses in Cerrone. The last time "Mystic Mac" was in the octagon, he suffered a fourth-round submission at the hands of nemesis, Khabib Nurmagomedov, at UFC 229 in October 2018. That fight will likely most be remembered for the melee that broke out afterward and left McGregor suspended for six months. Prior to that, McGregor was stopped in the 10th round by Floyd Mayweather Jr. in an August 2017 boxing match.

You would have to go all the way back to November of 2016 when McGregor became the first fighter in UFC history to hold world titles in two different weight classes simultaneously when he stopped Eddie Alvarez in two rounds and added the lightweight title to his featherweight crown.

There were obvious questions surrounding McGregor's desire to fight considering the amount of money he has made and the controversies he had found himself in that range from punching a man in an Irish pub to allegations of sexual assault.

Those questions were answered emphatically in front of a rabid crowd of 19,040 fans in the sold-out arena that came to see McGregor. Among the fans, a litany of celebrities were cageside as everyone from New England Patriots quarterback Tom Brady to lineal champion Tyson Fury to Matthew McConaughey and Dave Bautista were present.

It was expected to be a drag-out brawl at welterweight between the two fighters, but McGregor wasted little time on the attack. After missing with a left hand, McGregor clinched and plowed his shoulder into Cerrone's face. As the two separated, McGregor shocked Cerrone with a head kick that rocked Cowboy badly.

In a blink of an eye, McGregor was all over his wounded opponent and punished him with a bevy of power shots until referee Herb Dean pulled him off at the :40 mark. The arena broke into a frenzy after the initial shock of McGregor's dominant performance. Afterward, McGregor showed his fallen opponent respect by hugging him and his family.

The build to this fight was far different than what took place ahead of McGregor-Nurmagomedov. That fight was filled with bad blood that spilled into the post-fight melee. This version of McGregor was respectful and left the trash-talking at the door ahead of the fight. He saved all of that energy for the fight when he blitzed Cerrone.

The UFC later informed the media that Cerrone was headed to the hospital.

McGregor said afterward that he would remain in the 170-pound weight class and promises there will be hell to pay for anybody who wants a piece of him. There is no bigger fight that can be made than McGregor vs. Jorge Masvidal, who was seated cageside with his BMF title. But there are a plethora of other opponents that include welterweight champion Kamaru Usman, lightweight contender Justin Gaethje, the winner of April's lightweight title fight between Nurmagomedov and Tony Ferguson. And there's always a third fight with Nate Diaz.

The future is up in the air but one thing is for sure: Mystic Mac is going to be a major player in 2020.

12:30 a.m.: McGregor swings and misses immediately. Right hand lands by McGregor. Conor BLASTS Cerrone with a left head kick! McGregor rushes in and pummels him with strikes. Down he goes! He’s punishing him! It’s OVER!!!!!!!

12:25 a.m.: This crowd is white hot as Cowboy and McGregor make their entrances. Bruce Buffer with the introductions. It's time to go!

12:15 a.m.: It's finally time. A wide range of celebrities are seated cageside. Tom Brady, Tyson Fury, Dave Bautista, Claressa Shields and a host of others are here to see Conor McGregor return against Donald "Cowboy" Cerrone.

12:00 a.m.: The third round was much of the same. Holm decided to clinch and occasionally throws a combination. Ultimately, she did more than Pennington and takes a unanimous decision with scores of 29-28, 30-27 and 30-27. The crowd hated it, and it won't do her any favors when it comes to securing a big fight. But you never know. A win is a win, I suppose.

11:53 p.m.: Another round of nothing. The crowd isn't pleased. Hard to tell who is winning. Pennington? I'll tell you who isn't winning. The fans.

11:48 p.m.: Nothing to talk about in the first round. Holm waited, Pennington attacked and they clinched along the cage for the entire round. You would think that Holm would use her superior striking, but she has decided that a clinch battle is the path to victory. Truly baffling.

11:35 p.m.: We're at the co-main event as Holly Holm and Raquel Pennington meet again in a rematch from their bout five years ago when Holm made her UFC debut. Holm won a contentious split decision and went on to accomplish big things in her UFC career as a champion in two different weight classes. Pennington had a shot at UFC gold but came up short against Amanda Nunes. She ended a two-fight losing streak when she beat Irene Aldana last July and hopes to avenge her loss to Holm.

11:21 p.m.: In a sloppy fight, Aleksei Oleinik submitted Maurice Greene with an armbar. It was bad. Oleinik held on to a headlock in the first. Some things happened and then he finally secured the armbar in the second. Nothing to see here. Next fight, please.

10:56 p.m.: Two fights and two stoppages. We're blowing through this card and up next is a pair of heavyweights as Aleksei Oleinik takes on Maurice Greene in a fight that few see going the distance.

10:52 p.m.: After starting off fast, Osbourne found out quickly that there were levels to this game as Brian Kelleher took him down, got Osbourne to expose his neck and sunk in a deep guillotine that elicited a submission at the 2:46 mark of Round 1. Kelleher had him trapped to the point where Osbourne had to tap out with his feet. Impressive.

10:42 p.m.: Up next is Brian Kelleher vs. Ode Osbourne. This fight was moved to the main card after Alexa Grasso badly missed weight and her fight with Claudia Gadelha was canceled. Big opportunity for Osbourne, who made a splash on Dana White's Contender series.

Carlos Diego Ferreira submits Anthony Pettis in the second round

10:31 p.m.: Carlos Diego Ferreira made mincemeat out of Anthony Pettis and submitted him with a rear-naked choke in the second round. After applying pressure to nullify Pettis' striking in the first round, Ferreira closed the distance in the second, put him on the mat, worked him over, took his back and sank in a neck crank to get the tap. Big win for Ferreira, and there will be plenty of questions about the future of Anthony Pettis.

10:21 p.m.: We're kicking off UFC 246 with a lightweight clash between former UFC and WEC lightweight champion Anthony Pettis and Carlos Diego Ferreira. Pettis needs this win against a rising Ferreira in order to keep his name above water in a crowded division.

10:00 p.m.: With scores of 30-27, 30-27 & 30-26, Roxanne Modaferri ends Maycee Barber's unbeaten streak as the biggest underdog on the card. Both fighters were all class afterward. Hopefully, Barber can make a full recovery.

Great show of class and respect between Roxy and Maycee #UFC246 pic.twitter.com/tePTyOjOPt

9:57 p.m.: Between rounds it was revealed that Barber has a partial ACL tear and her mobility is limited. She eats several combinations to open the third round and just doesn't have the leverage to fire back. Barber is on her back and fighting, even sweeping at one point and working an Americana submission. But the injury is too much. This is going to be a big win for Modafferi.

9:47 p.m.: Modafferi is giving Barber hell in there. Kept her on her back and controlled her in the first round and is doing much of the same in the second. Barber finally reverses and lands some ground and pound, but Modafferi sweeps and is all over Barber. Barber also has a nasty gash on her head and is spilling blood all over the canvas. Barber is going to enter the third round down 2-0 and will need a finish.

9:35 p.m.: One of the most intriguing fights of the night is up next as Maycee Barber gets another chance to show that she's the real deal as she squares off with seasoned veteran Roxanne Modafferi in a flyweight showdown. Barber is recognized as one of the fastest rising stars in the UFC and aims to stay undefeated.

9:24 p.m.: "Super" Sodiq Yusuff continues to climb the ladder in the featherweight division with a unanimous decision over Andre Fili (29-28, 29-28 and 29-28) where he showcased his striking and grappling to earn the decision. His stock arrow is pointing up.

9:12 p.m.: We're in the middle of a smoker between Sodiq Yusuff and Andre Fili as T-Mobile Arena slowly begins to fill up. You can tell that this is a different crowd from your usual UFC event, and the atmosphere here should be special. As for Yusuff vs. Fili, it's been a back-and-forth battle that has slowed down a bit in the second as Yusuff has had Fili on his back for much of the round and has had control. Could either be 1-1 or 2-0 Yusuff as we enter the third round.