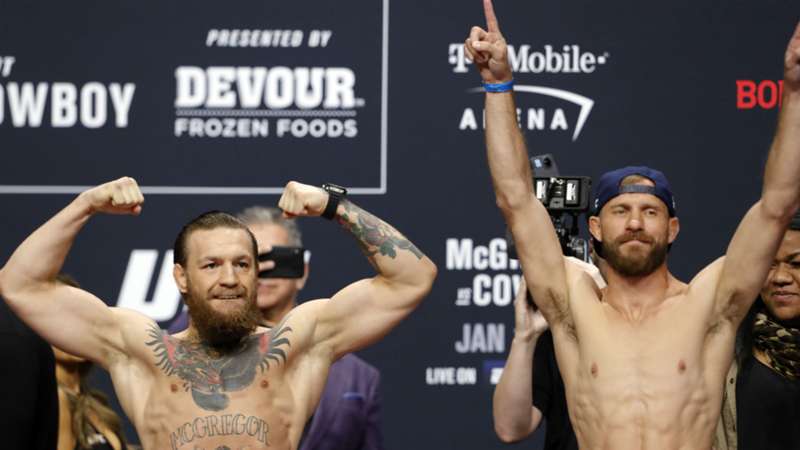 Conor McGregor will look to set the table for a great 2020, beginning with taking on Donald Cerrone.

Conor McGregor is back and calling everyone out — Jorge Masvidal and Kamaru Usman, Justin Gaethje, and of course, his biggest rival, Khabib Nurmagomedov.

However, if “Notorious” is going to be able to face any of those fighters in 2020 and beyond, he’ll likely have to handle business convincingly against Donald "Cowboy" Cerrone first. The UFC launches its 2020 campaign with McGregor returning to the octagon against Cerrone as the headliner of UFC 246 on Saturday, Jan. 18 at T-Mobile Arena in Las Vegas.

This bout marks McGregor’s first fight since his fourth-round submission loss to Nurmagomedov in October 2018. Prior to that, you’d have to go back to November 2016 for McGregor’s last victory — a second-round TKO of Eddie Alvarez. That fact sparks greater urgency for the Irish fighter to get a win.

“It'll take me into the year," McGregor (21-4) recently told TheMacLife about what a win over Cerrone would mean for his 2020. "I'm looking at this like a season, so this is the beginning of the season. Donald is the first one that I agreed to have a bout with, so here we are."

Getting the victory won’t be easy, though, as Cerrone (36-13, 1 no contest) touts the most wins in UFC history, including the most finishes, entering the bout. However, the 36-year-old has gone 0-2 in his last two fights: a first-round TKO loss to Gaethje in September 2019 and a second-round TKO fall to Tony Ferguson in June.

McGregor vs. Cerrone has been brewing since December 2015 when they appeared at a press conference together to promote the former's featherweight title fight against Jose Aldo.

That's when Cerrone warned McGregor about moving up in weight.

“Conor has no right coming over to 155," Cerrone said at the time. "There is no way. He is not gonna stand a chance. We are too big for him. We are too strong. So, you can take your little English ass ..."

McGregor interrupted and issued his own caveat to Cerrone: “You are too slow and too stiff. You are stiff as a board. I will snap you in half. And that’s it."

Will McGregor set the table for a huge 2020, or will Cerrone add the most significant victory to his MMA ledger?

Here is everything you need to know about UFC 246.

When is Conor McGregor's fight vs. Donald Cerrone in UFC 246?

The main card pay-per-view can be purchased for $64.99. Every UFC PPV can be ordered through ESPN+, which requires a subscription.

Where is UFC 246 taking place?

UFC 246 goes down at T-Mobile Arena in Las Vegas. McGregor and Cerrone aren’t strangers to the facility, as “Notorious” has fought three of his last four fights there, including his super bout against Floyd Mayweather Jr. Meanwhile, "Cowboy" will be having his second fight at T-Mobile Arena, although he, like McGregor, has fought in Sin City several other times.