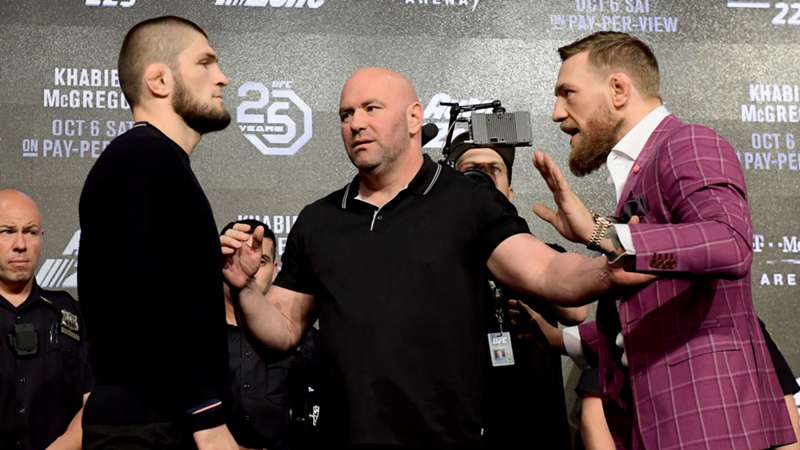 Dana White says Khabib Nurmagomedov will be back in the fall to face the winner of UFC 249, but what does that mean for Conor McGregor?

Khabib Nurmagomedov will "100 percent" defend his lightweight title against the winner of the postponed UFC 249 main event between Tony Ferguson and Justin Gaethje, according to UFC president Dana White.

Nurmagomedov withdrew from his fight against Ferguson that was scheduled for April 18 because he is stuck in Russia due to the coronavirus pandemic. The UFC scheduled an interim 155-pound title bout between Ferguson and Gaethje on May 9 in Jacksonville, Fla.

“The Ferguson vs. Gaethje fight is one of the most violent fights you will see,” White said in an Instagram Live interview with ESPN. “I can guarantee that. This fight is going to be incredible. The winner will fight Khabib for the title ... 100 percent."

A Nurmagomedov vs. Ferguson fight has been called off five different times, with reasons ranging from injuries to tripping on a Fox production cable.

If Ferguson prevails against Gaethje, White says the sixth time will be the charm. White also said a Khabib return will likely come in "September or October."

Where do recent developments with Khabib and UFC 249 leave Conor McGregor?

With White announcing the UFC 249 winner will face Nurmagomedov, where does McGregor fit into the picture? Former UFC lightweight champion Eddie Alvarez, who was stopped by the Irishman in the second round of their 2016 bout, doesn't think McGregor will get redemption on Nurmagomedov but could see him stop Ferguson.

McGregor took only 40 seconds to knock out "Cowboy" Cerrone in his most recent fight in January, but Alvarez still doesn't think he could handle Nurmagomedov.

"I don’t like the style matchup for him with Khabib," Alvarez said. "I don’t think he has enough experience in that realm to overcome Khabib at any point.”

With Ferguson-Gaethje taking place in May and the winner facing Nurmagomedov in the fall, it's highly unlikely that McGregor would get an opportunity to regain his UFC lightweight title in 2020.

It's unlikely that McGregor will wait until 2021 to compete, and there are a few options for the 31-year-old should he decide to fight sooner rather than later.

The most lucrative, by far, would be a third showdown with Nate Diaz. The two split a pair of fights in 2016 that raked in huge pay-per-view numbers with both eclipsing the 1.5 million mark.

Diaz hasn't fought since losing to Jorge Masvidal by doctor stoppage for the BMF title in November. With both seeking big fights, it appears that the door is wide open to complete the trilogy.