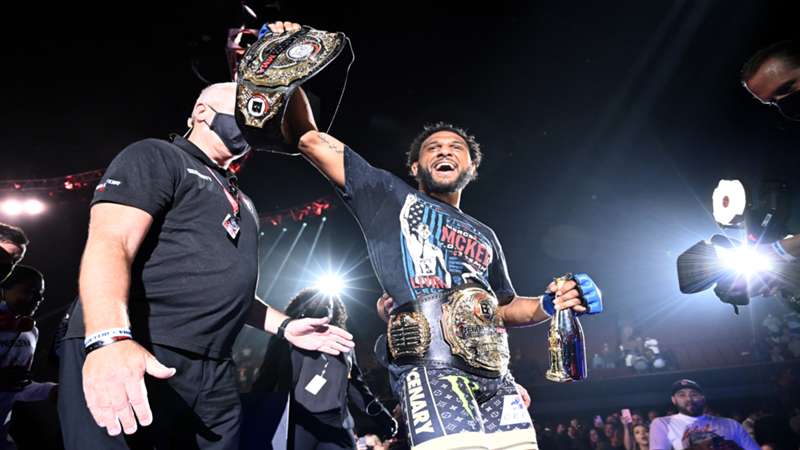 This is after McKee extended his undefeated streak with a victory over Patricio "Pitbull" Freire.

Dana White was one of many to take notice of A.J. McKee becoming the Bellator world featherweight champion with a first-round submission of Patricio "Pitbull" Freire this past weekend.

The undefeated McKee (18-0) also calling out the likes of Max Holloway, Alexander Volkanovski and Brian Ortega additionally made it onto the UFC president's radar.

While speaking with TSN, White didn't shy away from addressing McKee when the 26-year-old Long Beach, California product's name was broached.

"I don't know, we'll see," White first said when asked how McKee would fare against the aforementioned UFC fighters. "When his contract's up, he'll have to call. We'll see what we can do."

White even responded to McKee saying he met White backstage once as a 10-year-old kid.

“No, but I heard about it," White said in response to if he had any recollection to their encounter. "That’s awesome. Listen, apparently I owe him lunch. So, you know, I will pay my dues and buy him lunch.”

One person who is not a fan of White's is McKee's father and coach, Antonio McKee. In the aftermath of his son's victory over Freire on Saturday night, McKee's father explained his disdain for White to a pool of reporters.

“Well, I mean, you know, I don’t wanna jeopardize my son’s career. But I personally think he (Dana White) is a piece of s—t," McKee's father said, as reported by SportsKeeda.com. "It is what it is. I mean, I’m a man, just, you know, I really have a hard time, you know. But my son is the best fighter in the world. Whether I like Dana or Dana likes me, it doesn’t matter to me. He’s different. He’s A.J. McKee. I’m just a coach. So, I won’t get involved in his relationships with Dana, if he decides to go to UFC, whatever his career is. But it’s only just for the benefit of my son."