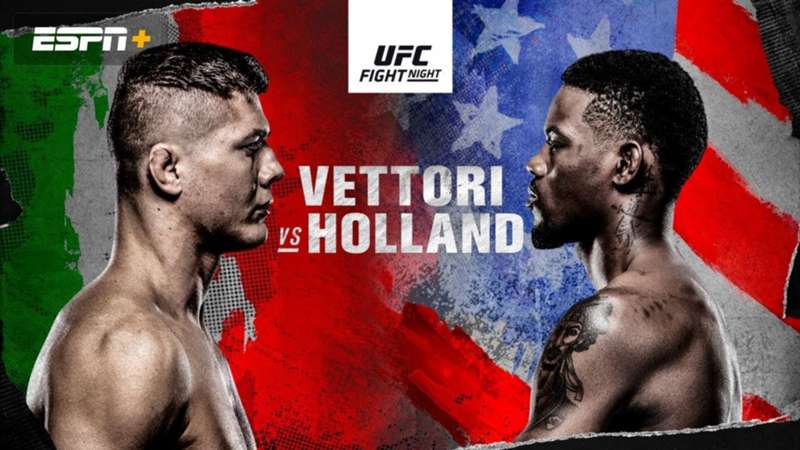 Holland steps in at short notice, just weeks after his last fight, due to an injury to Darren Till.

The latest UFC Fight Night is an interesting one, with a quirk of fate leading to a last-minute change to the main event.

Darren Till was set to return to the Octagon in a clash against fellow contender Marvin Vettori that would have put the winner into the conversation for a future middleweight championship fight. However the Brit suffered a broken collarbone late last month and had to withdraw.

On April 1, the Italian's replacement opponent was confirmed as Kevin Holland, which caught many off-guard given that Holland last fought as recently as Mar. 20 in a disappointing decision loss to Derek Brunson. Holland will look to erase the bitter memories of that performance fast and bounce back at the expense of Vettori.

Here's how you can watch UFC Fight Night: Vettori vs. Holland.

When is Vettori vs. Holland? Date, start time

Due to Till's anticipated involvement, this particular Fight Night was given a very UK-friendly start time. Preliminary fights get underway from 5 p.m. British Summer Time (BST), which is noon on the US East coast. The main event cagewalks, as ever, depend on how long the rest of the card runs.

What channel/stream is Vettori vs. Holland?

In the United States, this will be the second 'UFC on ABC' event, meaning the major TV network will be showing the main card while ESPN+ will also provide coverage including prelims. In the U.K., BT Sport will begin coverage of the action from 6 p.m., which will include most of the prelims. UFC Fight Pass will have the show available to many other countries, and will stream the prelims globally.

Meanwhile, fight fans in Austria, Germany, Italy and Spain will be able to stream the full card on DAZN. You can subscribe to the sports streaming service here.

Where is the Vettori vs. Holland fight?

The card emanates from the UFC Apex in Las Vegas, which has hosted numerous events during the COVID-19 pandemic so far.