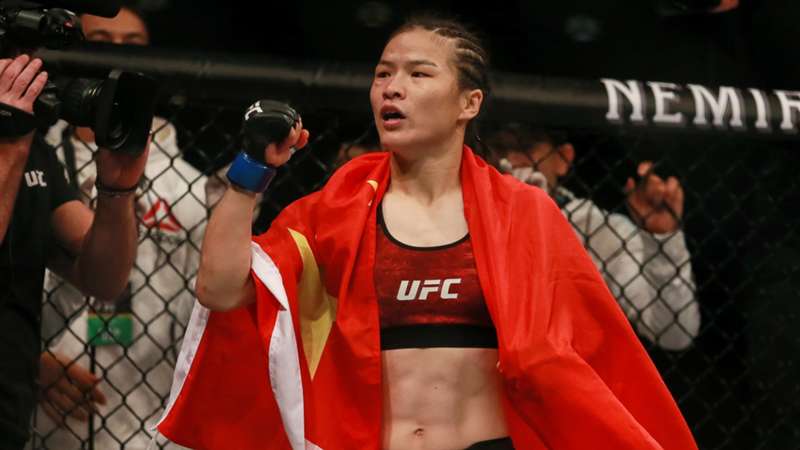 The women's strawweight champion had an incredible journey before touching down in Las Vegas, where she'll face Joanna Jedrzejczyk on March 7.

A deep sigh of relief overcame Zhang Weili this past weekend in a feeling that was best summed up by her Instagram post.

She and her team had finally made it to America. After nearly three weeks of scary uncertainty, the UFC women’s strawweight champion’s first title defense is now within arm’s reach, as Zhang will put the championship on the line against Joanna Jedrzejczyk in the co-main event of UFC 248 in Las Vegas on March 7.

We made it to America. We are ready. Always ready. See you soon Las Vegas. #represented #ufc248

"We made it to America. We are ready. Always ready. See you soon Las Vegas," the Instagram post read.

That being said, Zhang’s training camp for this fight has been anything but ideal. In fact, it has been nomadic and unpredictable, bogging her down both physically and mentally.

As coronavirus outbreaks spread globally from her native China, Zhang was forced farther and farther from her homeland, with her training camp being uprooted each time.

“A lot of people have been telling me to pull out from this fight because I didn’t have a normal camp and have been going through a lot, but I always tell myself ‘I can do it. I can make it through,’” Zhang told DAZN News via an interpreter at UFC headquarters on Tuesday. “And here we are in Vegas now, so that’s what’s important — to have faith in yourself.”

Her whirlwind of a journey began in Beijing, then Thailand, where Zhang spent roughly a week. But when the coronavirus spread there, too, her camp was forced to set up shop once again — this time in Abu Dhabi, where she’d spend about 12 days.

“Due to the virus in China, it made it way harder than it used to be,” Zhang said. “I had to get used to the jetlag — Thailand is two-hours difference from Beijing … and then to Abu Dhabi. The weather and temperature is really different in each place: Beijing is cold, Thailand is hot and humid, Abu Dhabi is hot and dry. That made me feel — the whole camp — very tiring. The only time I could rest is on the airplane.”

Despite the draining physical toll, Zhang insists that the winding road “didn’t affect my camp at all.” Instead of harboring frustration about her predicament, Zhang rolled with the punches — quite literally — adapting to her changing surroundings.

“In traveling, I also went to a lot of gyms to learn from the other great athletes like the Muay Thai legend Saenchi,” she said.

“So, I learned a lot in this trip, and that’s given me more confidence for this kind of experience.”

The 30-year-old can say that in hindsight, but what immediately followed the pack-and-go, displaced training camps was the nail-biting worry that the fight against Jedrzejczyk wouldn't even happen. With millions being quarantined in China as a coronavirus cautionary measure, Zhang knew obtaining a U.S. visa would be extra challenging under the circumstances.

But Zhang got the good news last week that she had secured the visa.

“Me and my team have overcome a lot for the visa, with the virus,” Zhang said. “Now I’m ready, eager to fight.”

Late last month, Jedrzejczyk posted a distasteful Instagram meme mocking Zhang and the coronavirus with a Photoshopped version of their UFC 248 poster that had the Polish fighter donning a gas mask with laughing emojis surrounding her, in a reference to mocking the epidemic.

Zhang took to her own IG account and responded angrily.

"To make fun of tragedy is a true sign of ones character," Zhang wrote at the time. "People are dying, someone’s father, someone’s mother, someone’s child. Say what you want about me if it makes you feel stronger but do not joke about what’s happening here. I wish you good health until March 7th. I will see you soon."

The post garnered nearly 32,000 likes, as the support for Zhang amidst the global crisis increased instantly.

Jedrzejczyk issued an apology soon thereafter, and Zhang says she has moved on from it.

“Everyone makes mistakes,” Zhang told DN. “She already apologized. I accepted the apology.”

Dr. Nancy Messonnier, director of the National Center for Immunization and Respiratory Diseases, warned that the outbreak will spread in the United States and that its effects can be harsh.

“Right now is way better than a few weeks ago,” Zhang said. “It’s under control now. Before, China had banned all the transportation. Now, several companies are allowing transportation and because government asks neighborhoods to lock themselves in and not see each other (quarantine), it helped the situation a lot. A lot more people … there’s a sense of decline.”

A Financial Times’ story out of Beijing reported Monday that China has beefed up its planes, trains and buses to help people return to work, as the country loosens some of its quarantines and travel restrictions.

Still, there are long ways to go. Zhang (20-1) would like nothing more than to deliver a quality victory over Jedrzejczyk (16-3) to temporarily uplift all those affected by the coronavirus in China.

“A lot of people have locked themselves in their place, fighting so much to get rid of the virus in China,” Zhang said. “Of course, when you lock yourself in for several days, you will get negative. But I hope this win against Joanna can help to inspire the people of China and give them the courage to push through the virus situation in China.

"I’m excited for this fight.”