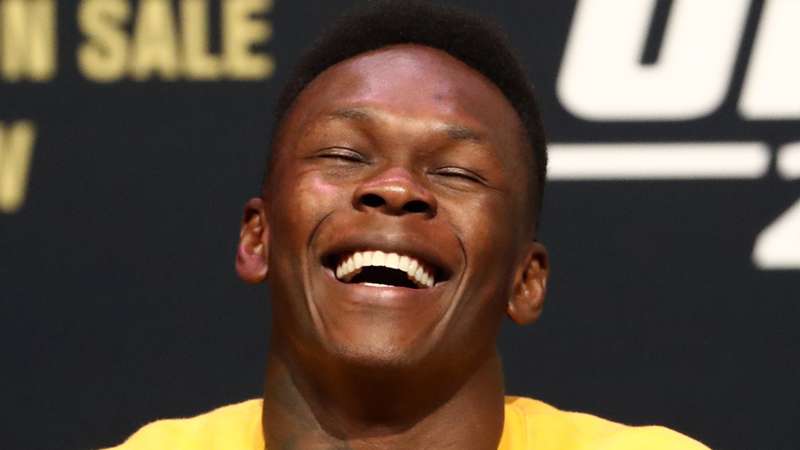 It all started when Woodley, a former UFC welterweight champion, announced his desire to move up in weight and target the middleweight champ, Adesanya.

During a recent Instagram Live session, Tyron Woodley openly spoke about his desire to move up in weight and challenge the UFC middleweight champion Israel Adesanya.

All Adesanya could do is laugh in response.

He took to Twitter and blasted Woodley, the former UFC welterweight champ, sparking fiery exchanges between the two from Monday night into the wee hours of Wednesday morning.

Adesanya first began jabbing at Woodley in disbelief how the former welterweight champ would believe that he could compete in the same Octagon against him.

Lol see me see trouble...whala just dey find me anyhow.@TWooodley can’t even deal with one Nigerian Nightmare @USMAN84kg when he was at 30%.
Oboy sit down before I lash your nyash well well 😂

That's when Woodley fired back, calling Adesanya "the great white hype" and blasting his efforts against Yoel Romero in a lackluster unanimous decision win March 7 in UFC 248.

U the great white hype! I ain't hard to find! You terrified of power. You watched paint dry against @YoelRomeroMMA & now u have the record for least amount of strikes. Fix that fake ass @BOOSIEOFFICIAL Box before he come looking for you! @ufc gone protect @stylebender too?! https://t.co/Rpec3rdKpA

Adesanya then doubled down, letting Woodley know that there's no way he could match his skills in the Octagon, while also mocking the welterweight's rapping in the process.

My squashed wide neega @TWooodley
The only thing you ever beating me at is a rap battle (maybe) lol
I see your ambition, you doing what I’m doing with my plans and moving up...I’m flattered.
Just remember that you will have to see me and you’ve only seen Mr Nice Izzy.

Woodley then let Adesanya know that he more than has the credentials necessary before asserting that Adesanya was a little too "sensitive" in reacting to his ambition of moving up in weight.

Im a 5 time world champ stick figure. I gave you props & said after I wipe the Woodley Weight division clean I'll move up. Someone asked me about moving up. You're the one that got sensitive. Now I'll pull your tampon out. And your homie name is #Hooker 🤣 lay ups I tell you! https://t.co/2jSSFbHexo

Woodley did say that he intends to fight a few more bouts at welterweight before moving up. But from the sounds of their exchanges on Twitter and knowing their battle-tested MMA skills, fans should add this potential fight to the list of bouts that they want to see in the future.